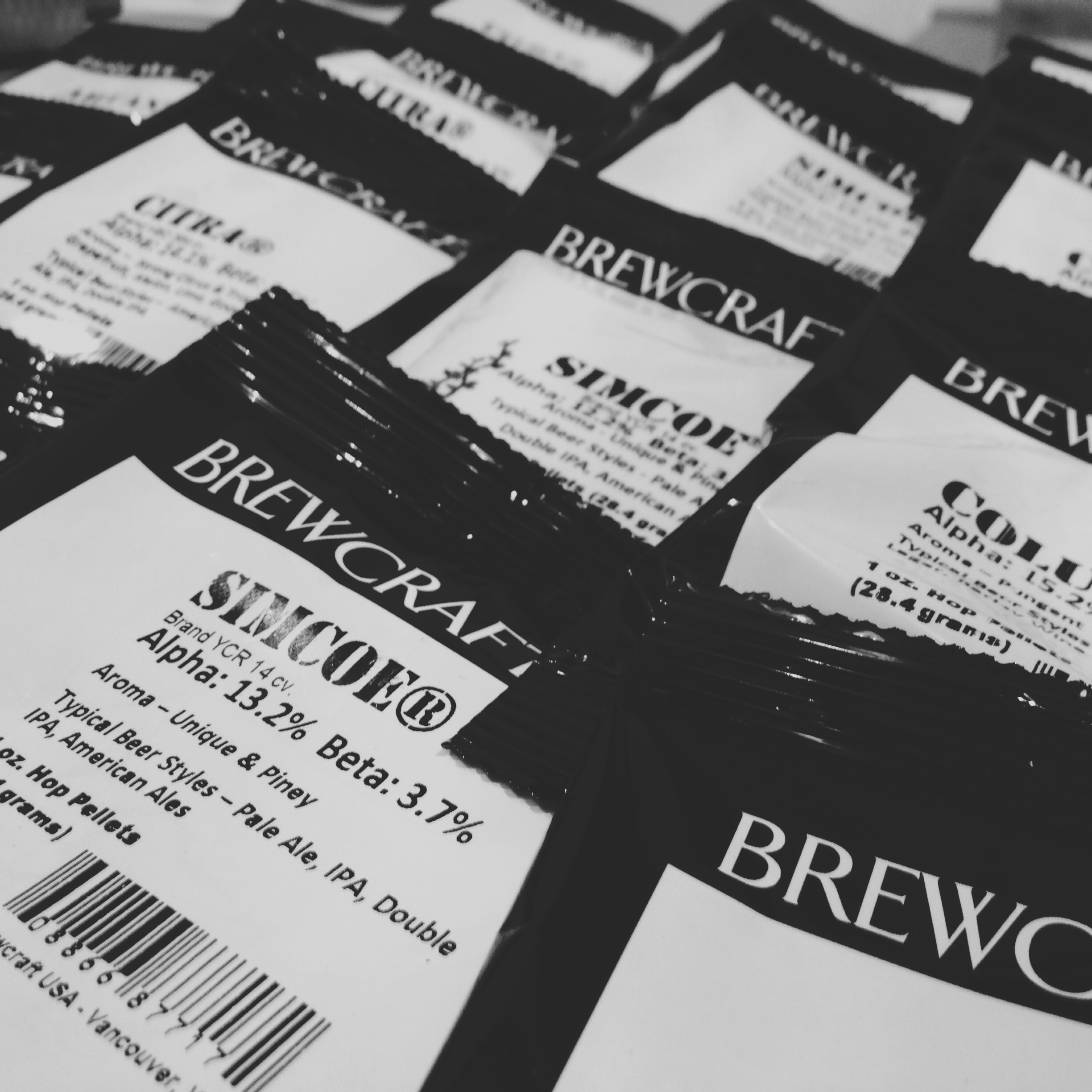 After buying the wrong lager yeast for #042 and watching my lack of finely-grained temperature control force some compromises on that batch, I figured it was time to finally complete my fridge setup by buying an STC-1000 temperature controller.

I took on the weekend project of buying a housing for the unit, as well as the parts necessary to wire it up with hot and cold control. I don’t need hot immediately, or possibly ever, but some way of holding a specific temperature range in my fridge was sorely lacking in the built-in controls.

Normally a project like this is beyond me, but I found a pretty foolproof wiring guide that I was able to follow and improvise against where needed. First time plugging in the box and it worked as expected, and it’s been humming away without complaint for the past few weeks. 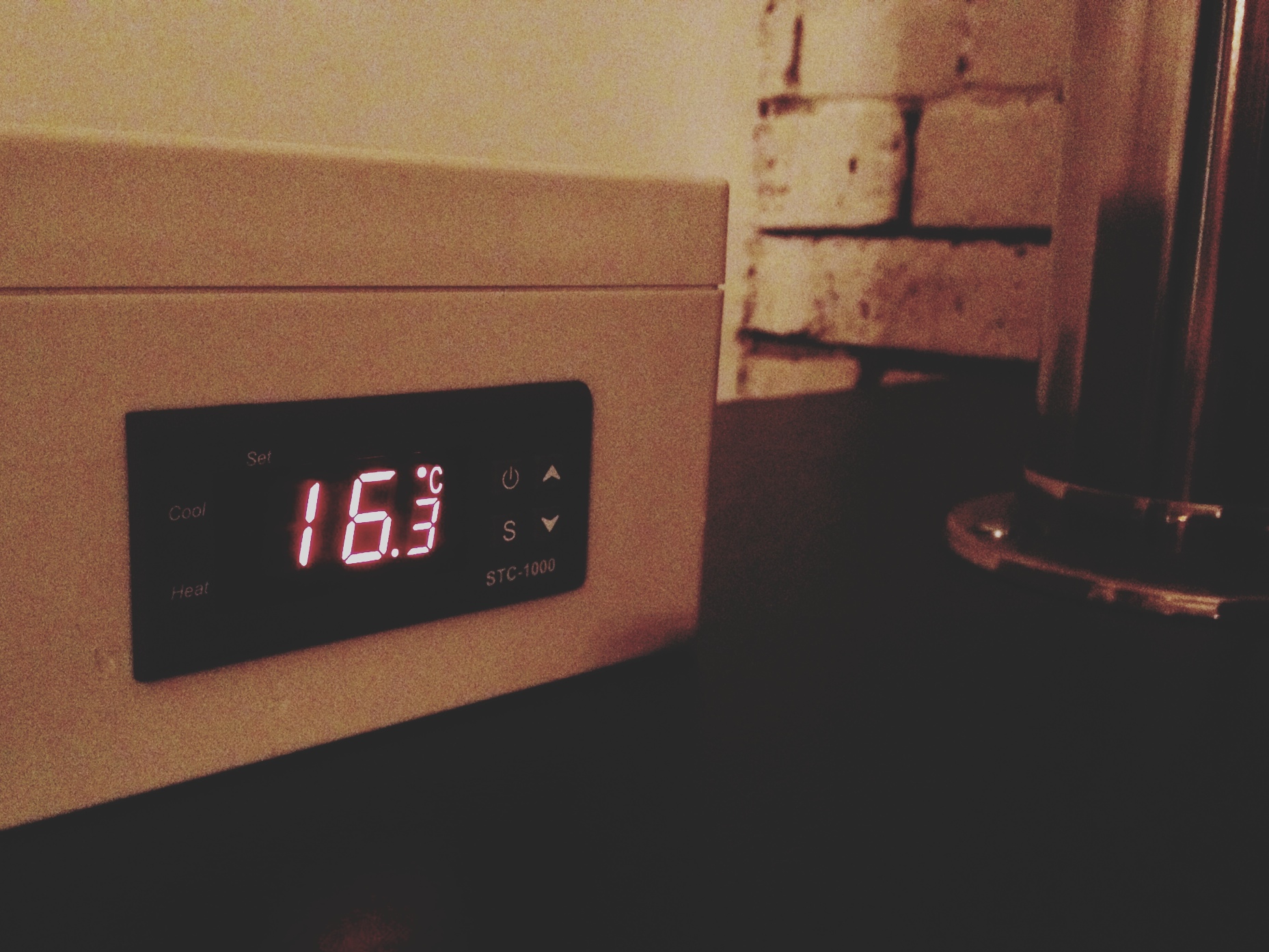 Which finally means I can do ales again! To celebrate, what better choice than a big hoppy mother of a double IPA? I’ve been gravitating toward complex DIPAs with fruity dank notes lately, so I threw together a melange of hops that I think ought to get the job done and went with it. I switched up my yeast too, I’ve been hearing good things about how WLP007 works with hops so I’m giving that a try. The excess off the starter pour smelled a bit acetaldehyde-y, but had a fairly pleasant cherry/almond extract flavour.

The mash profile for #043 is fairly standard, with a bit of oddness at the start before standardizing thermometer placement in the middle of the grain. A bit higher than desired though.

Brew day was going well right up to the point where I smashed my floating thermometer inside the kettle. It’s taken me a while, but I’ve learned not to panic when these things happen. Hitting up various forums, the advice was ever so typically across the board; You’ll shred your insides when you drink glass shards! You’ll be fine! You’ll die of mercury poisoning! It’s harmless! You should dump the batch! No you shouldn’t!

I went to the website of the manufacturer of my thermometer. It’s alcohol-based, not mercury-based, as most food thermometers these days are. I didn’t actually break open the thermometer itself anyway, just the outer glass tube. So I narrowed down my risk factor to just glass and whatever the millions of miniscule pellets were they used to weigh it down — stainless steel, it turns out, so no harm there — which directly inspired the naming of this brew.

Clean break or no (it seemed to be, after fishing out the remaining glass chunks), I figured I could fairly easily minimize the risks by transferring through a hefty screen; I tripled up the nylon hop socks on the end of the hose when transferring, which slowed down the flow to a trickle. I’ll do it again on transfer to the keg, and with those to preventative measures I’m satisfied that there’s no risk at all in drinking this batch. 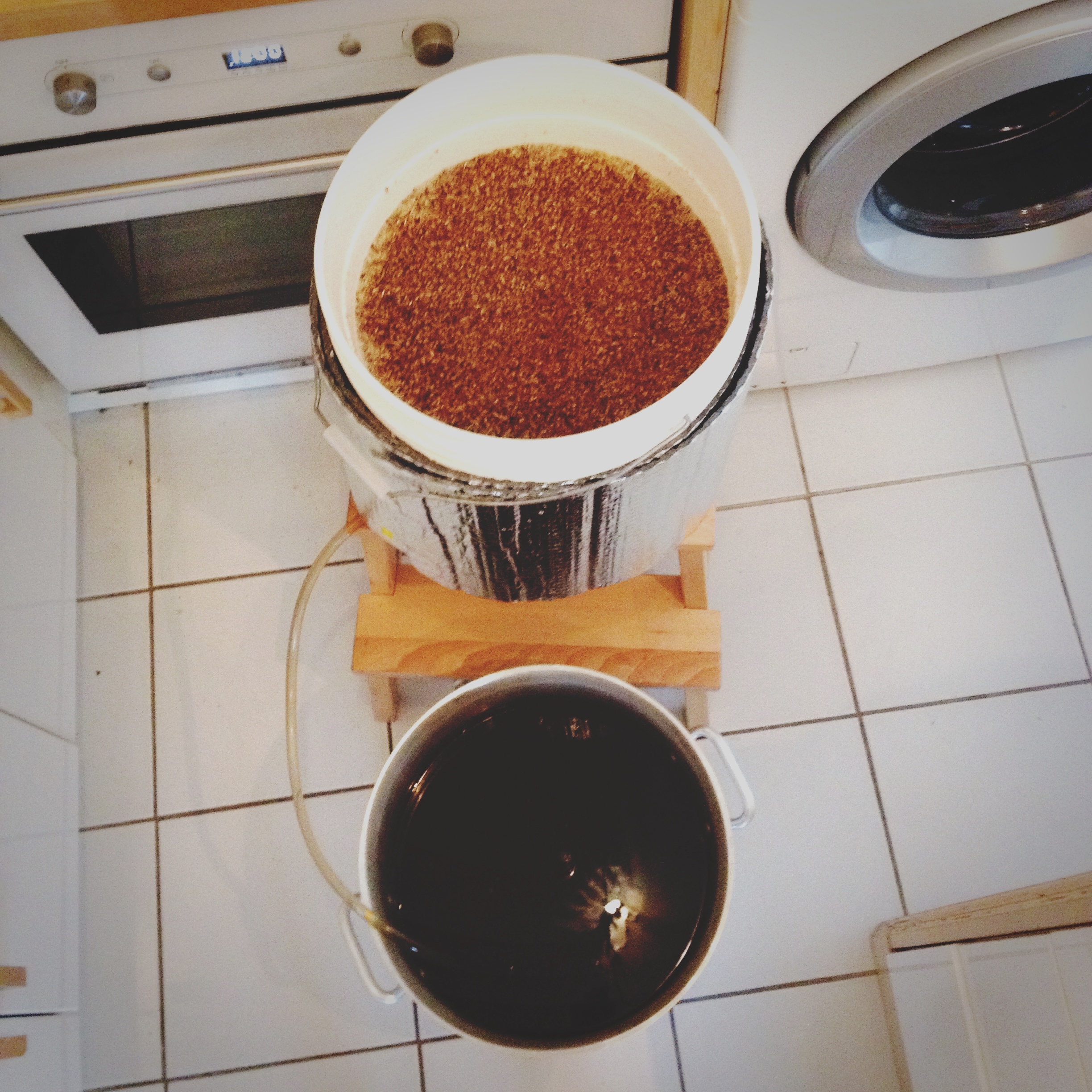 Fermentation was where I had some real issues. After two weeks I had dropped to 1.020, but even with daily yeast rousing I was still stuck at 1.017 three days later. I had to jump on a plane for an extended weekend, then after 5 more days it was pretty clear this beer was done.

Dry hopping was better than I’ve managed in the past though. Once it was done, I transferred to keg, purged, and threw in my dry hops. I’ve been wanting to dry hop in the keg since I started kegging, so I could shorten my time to drinking by carbonating at the same time. The trick is getting the hops in in such a way that you can get them back out again.

I have some nylon bags, so I threw 5oz of hops into one of those, tied it off, and securely tied up with a length of uncoated dental floss. The other end got tied to the keg handle, and after one misfire where the seal wasn’t tight enough I managed to fix that and pressurize. I can’t imagine doing it any other way in the future.

And as a side note, this was the first batch of beer I’ve made where the ingredients were completely recycled. I’ve long felt bad about throwing large bags of grain into the trash, but without an outdoor area to run a compost I haven’t had many choices. The local farmer’s market now accepts food scraps, so I was able to take my 25lbs of hot water-logged grain over and dump it off for composting. And my boil hops are necessarily removable thanks to my plate chiller, so I composted those too. I even re-used the yeast, though that didn’t go quite as well.

5/10. Rich, grassy, fruity, a touch dank, sweeter and full. The higher than planned mash temp foiled me a bit on this one. I’m going to keep working on the hop bill, the dank edge feels a bit out of place with the fruit salad on the rest of it. Not bad, just seems like it could use improvement.