Somehow it’s taken me this long, but I finally made my first German-style beer. In a surprising reversal my new fridge’s lower temperature range actually means lagers are a much easier target than ales right now. 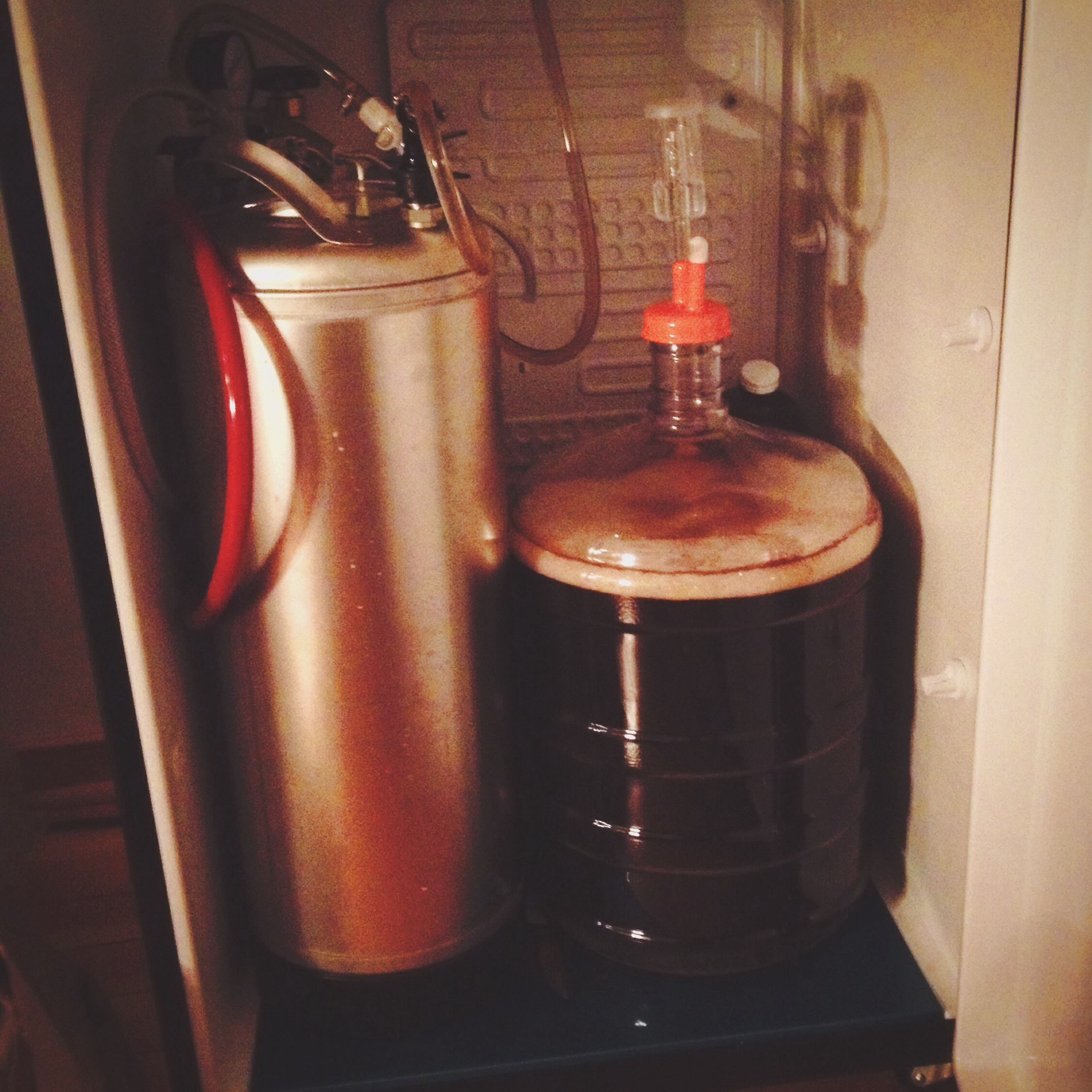 I planned a porter as my next brew, but I realized that I probably wouldn’t be able to get the fridge up to the 16-18C temperature range I’d need without some extra help in the form of a temperature controller and/or heat wrap. Since my previous ill-fated attempt long ago proved lagers were out of my reach, fermenting cold for a few batches while I figure out ale temps is a welcome change. Time to do my first real attempt at a lager.

Of course I was already on the way to my preferred homebrew shop (Bosagrape these days) when all this occurred. I briefly entertained swapping out for lager yeast and going semi-baltic with the porter recipe I had built a shopping list for, but the basic research I managed to cram in with a quick phone search showed that a good baltic porter recipe needs more than just lager yeast to differ from your English/American styles. I’ll come back to that one day, but for the sake of a quick recipe and a not overly difficult brew day I decided to turn to one of my favourite styles.

During my BJCP studies last year one of my favourite new discoveries was the Munich Dunkel. I’d had a lot of other dark lager styles, even some North American-made dunkels, but I’d never had an authentic German version. Ayinger’s Altbairisch was my introduction, and ever since then I make a point of ordering when I see one on a menu. (Nothing has lived up to Ayinger yet.) 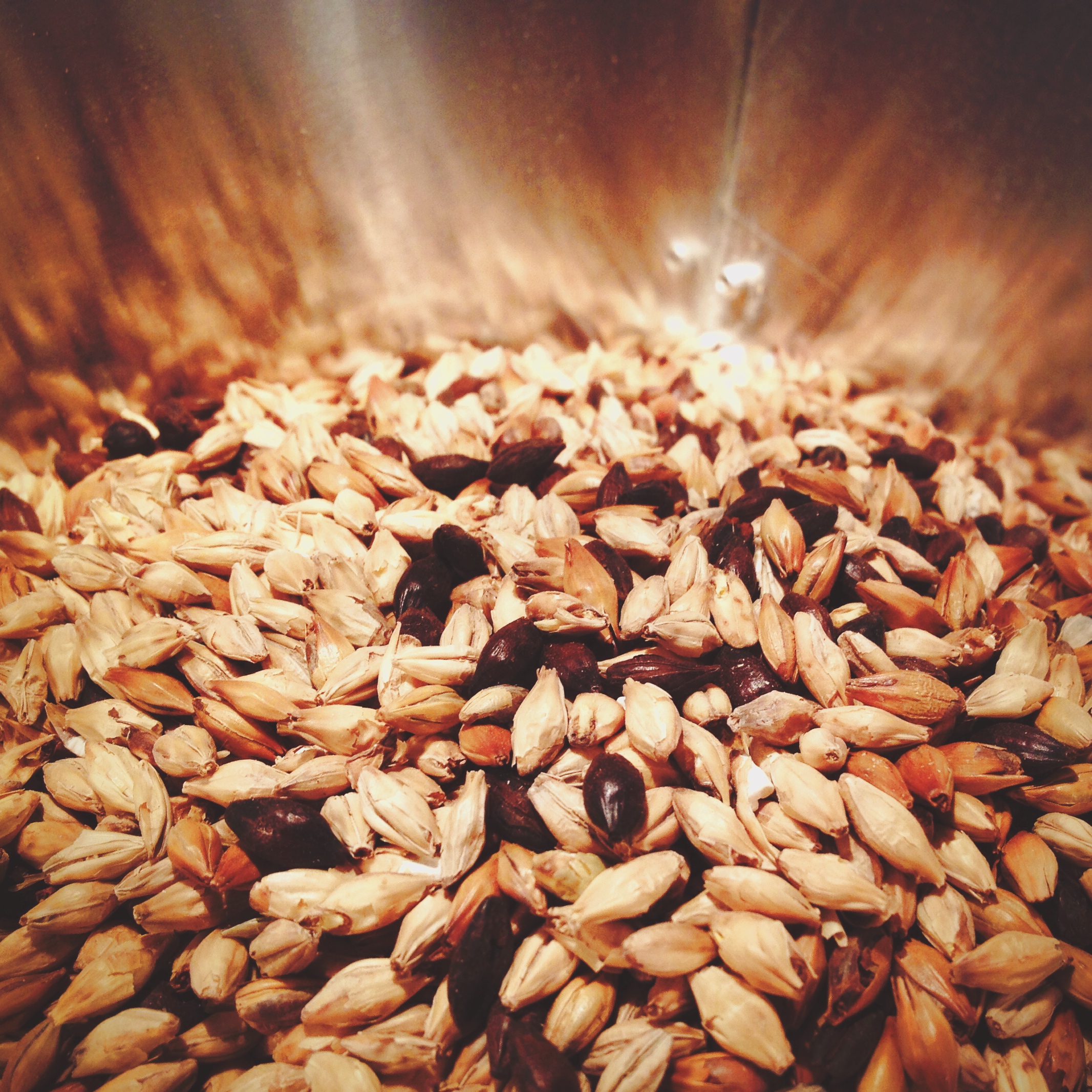 With a relatively simple grist and no decoction requirements — a decoction mash is suggested for commercial equivalency but opinions seem to be split on how necessary this is — it seemed like one I could find a good recipe for in the spur of the moment. I stumbled across a Denny Conn post with his fairly recent take on cloning Ayinger, which was good enough for me.

Brew day went well enough. I came in two points lower than target OG, and my mash hovered around 2-3F higher than the 149 recommended but since I often see much higher attenuation than expected I’m not too worried about FG yet. With richer malts I find the hot scotchies off of first runnings take on an interesting complexity, and this one did even more than most. Unexplained vanilla and caramel along with the malt sweetness, which probably didn’t come from the Jameson’s I used. 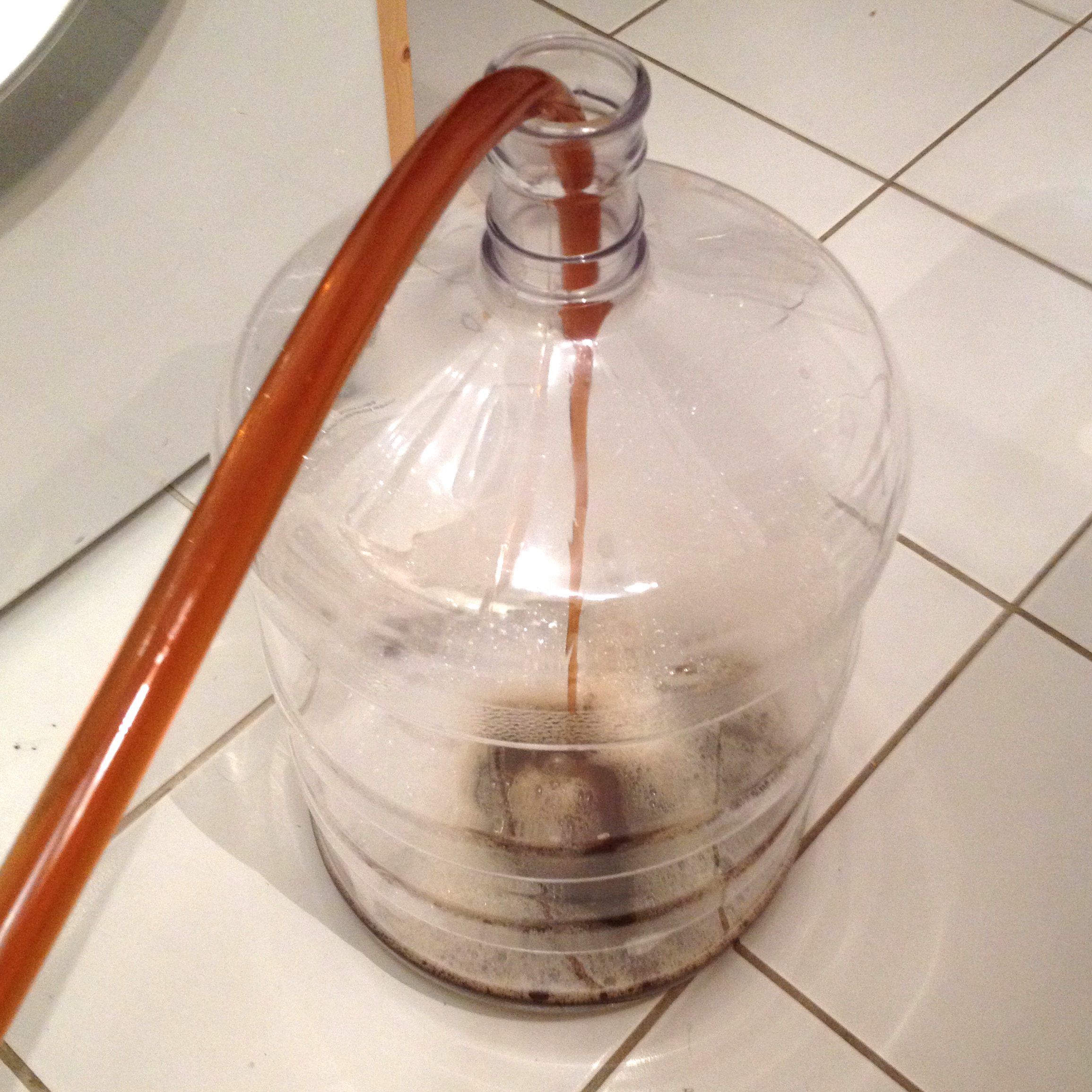 On transfer I noticed a much richer colour than normal. This will be a bit hard to describe and the photos don’t do it justice, but usually I notice colour comes out more in the highlights while the base colour is less saturated and usually transparent shades-of-brown. During transfer to the carboy this time the hoses lit up with a very deep solid red, along with a yellowish tan colour to the foam around the edges as it filled. It was a really nice effect, and has me optimistic about the appearance of this one.

I took a bit of a risk with the pilsner malt addition, the Therminator is a great addition to my DMS-fighting arsenal but my boils are still not as vigorous as they probably should be. I tried to leave behind as much break material as I could at the end of transfer. With 2 row it’s never that offensive, but the break on this one was foul and sulfuric. I wouldn’t have expected Munich to put off that much odour.

The one area where I am a bit worried is my yeast pitch. As a last minute brew, I only had a day or so to grow up the slant. When the krausen dropped after about 24hrs, I added a thick slurry of about 50% more extract to bump it up further, gave it 6hrs, then let it crash in the fridge overnight. I’m not confident I have much more than half my ideal pitch in there, I’ll have to plan better for the next one.

After 12d, it’s still on the sweet side (15 points high) and tasting bready, a bit roasty, and a very light touch of sulfur/DMS. Since this is my first lager after all, I’m not going to worry about any of those factors yet, but it did tell me to start the diacetyl rest. I unplugged my fridge, which held its cold extremely well and only rose a few degrees a day.

After 18d and probably a longer rest than I needed, I took a sample. At 1.012 it was clearly done and ready to start lagering. The hydrometer sample tasted clean, no diacetyl or acetaldehyde, and the DMS was much lighter and coming across as light tomato juice rather than the classic cooked cabbage taste I usually get from it. Given how murky and yeasty the hydrometer pour was, I have hopes that even more of that is going to drop out as it lagers.

After a few days of crashing I grabbed a second keg and transferred, which allowed me to purge before letting it sit for the next couple months. This begin a lager, I also decided to use finings for the first time ever; I’m scared of Polyclar, so non-vegan friendly Isinglass and gelatin are my main choices. I went with gelatin.

Around the two month mark I started pouring this one. It has a rich bready caramel vanilla thing going that reminds me of the hot scotchie; North American Munich as the culprit maybe? I thought I was buying continental but realized after the fact I had grabbed the wrong bin.

Early pours also come with a bit of DMS and acetaldehyde; the former is variably noticeable, and may not sink the batch, but I’m a bit disappointed about the latter. After warming it up quite a bit for the diacetyl rest my only potential cause is a low pitch rate. I’m giving it a few weeks to see if it turns around; it’s not undrinkable, it’s actually not bad, but with those obvious flaws I’m hesitant to enter it into the upcoming competition.

6/10. It was astounding how much this one changed over time. It started DMSy and weird, then turned into straight up grape juice. After a few more weeks both the DMS and fruitiness dropped off and it ended up caramel and grainy after about 3-4mo.

Never quite got to what I expect of a dunkel thanks to the North American malt, but the fermentation oddness cleaned up surprisingly well. The noticeable DMS fell off after about 2mo, the grape character faded (I have to assume it’s an 833 characteristic because I got that off #042 as well), the only real lingering problem was a slightly noticeable hotness. I doubt I propagated my starter enough before pitching on this one, and that came across.

I’m being hard on it cause I tasted it throughout the rough period, but it came out quite decent in the end and scored a respectable 36 in the competition, so for a first (real attempt at a) lager, I’m happy with the results.