Earlier last year, awards were won. And the prize for taking Best Of Show was a brew day at local brewery Russell out in Surrey. That happened in the middle of January, so a post about the experience seems in order. 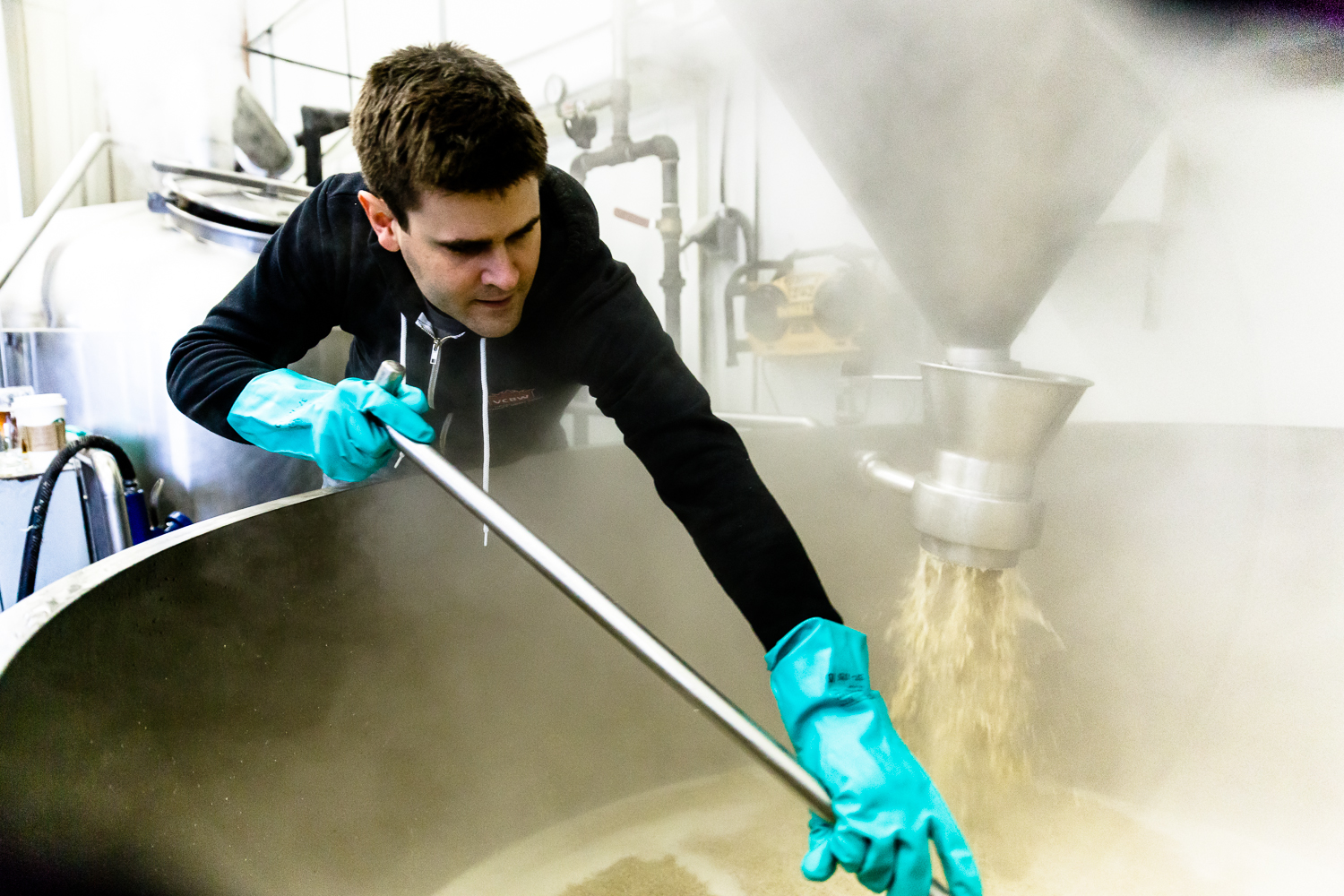 Shortly after the competition, I started talking to Jack and Anders, the brewers at Russell. I handed over my recipe, and then we began thinking through how exactly we’d scale up a half-extract brew-in-a-bag recipe to something we could produce on a commercial system.

Right at the start there was a vague notion about actually using the same ratio of extract as I did in the original brew to make up for their smaller mash tun. But it didn’t take long to scrap that idea for cost reasons, and just do a double mash instead. We decided to go full Gambrinus ESB malt for the extra toast level rather than replace the extract with 2-row. We also thought we’d be best shooting lower on the final gravity as a safety measure since the previous batch was mostly undrinkable before 4 months of age and that’s not overly practical at a commercial scale.

All in all it took about 6 months of sporadic back and forth to decide on a recipe, order the ingredients, and set a brew day. But we finally made it happen on January 18th, with a frighteningly early start of 6am.

The alarm went off and I had to drag myself out of bed. Walking through downtown Vancouver that early in the morning is eerily quiet; you’re the only pedestrian, there are very few cars on the road, and nothing is open. This is probably pretty common in smaller towns, but it’s rare to see the heart of the city so thoroughly shut down.

I arrived at Russell after a few wrong turns, but just in time to grab a coffee while Anders finished time sheets. We headed downstairs to the grain room and started feeding the crusher with bags from the palette that contained my grain bill. 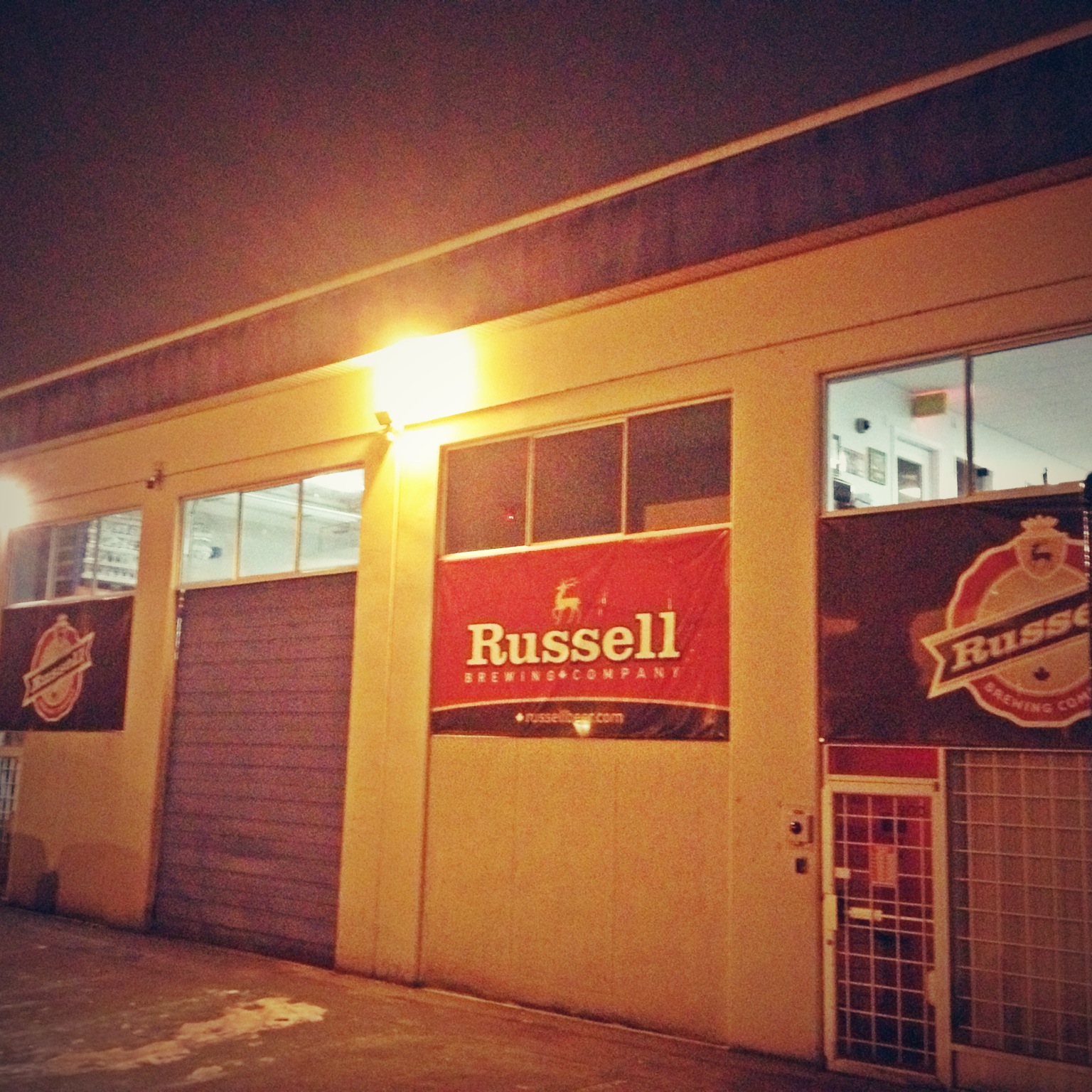 Normally at Russell, as with many other breweries, a grain silo full of base malt runs directly into the crusher and alleviates the need to lift dozens of 25kg bags. But my recipe called for Gambrinus ESB malt instead of the 2-row that fills their silo, so we did spend the first half hour opening bags and manually dumping their contents into the hopper. 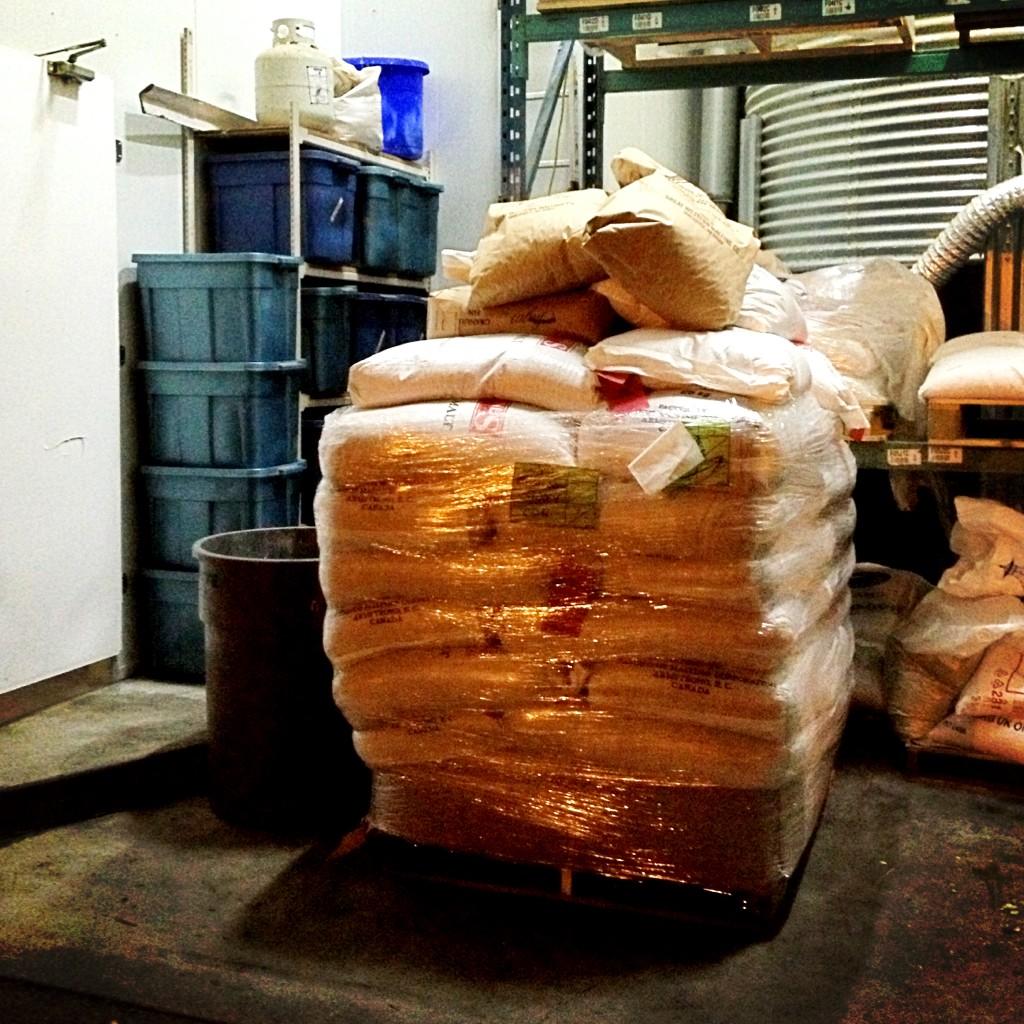 There’s a trick to getting grain bags open that it took me more than half a dozen tries to finally figure out properly. It involves opening the side opposite the label, and only cutting the first two inner stitches. It didn’t help that the stitches on a quarter of the bags were done by someone clearly under the influence, and not openable without savage knifework.

Something I didn’t think of ahead of time was how you’d ensure a good mix between base and specialty malts. On the homebrew scale it’s barely a concern, but in a larger batch it makes sense that you don’t want to rely on stirring the mash to keep all your grain evenly soaked. The fix for this is throwing half your base malt into the crusher, then your specialty malt, then top it up with the rest of your base. It puts the specialty grain right in the middle and guarantees it stays saturated at all times.

Our first mash was ready to go. Russell’s mash tun isn’t big enough to do the whole grain bill at once, so we split it into two separate mashes. This wasn’t nearly the time-killer it would have been at home; a commercial brewery’s piping allows you to mix hot water directly from the hot liquor tank with cold ground water, leading to fairly instantaneous temperature adjustments.

Anders handed me the mash paddle to stir the grain while he went to start crushing the second mash. Instead of filling the tun with water then adding grain afterwards, the grain hopper above feeds into a stream of perfectly-heated water, so you’re dumping a slurry of grain and water into the tun at the same time. To ensure full saturation you want to keep redistributing the grain on top as it fills, which manages to work up quite a sweat. 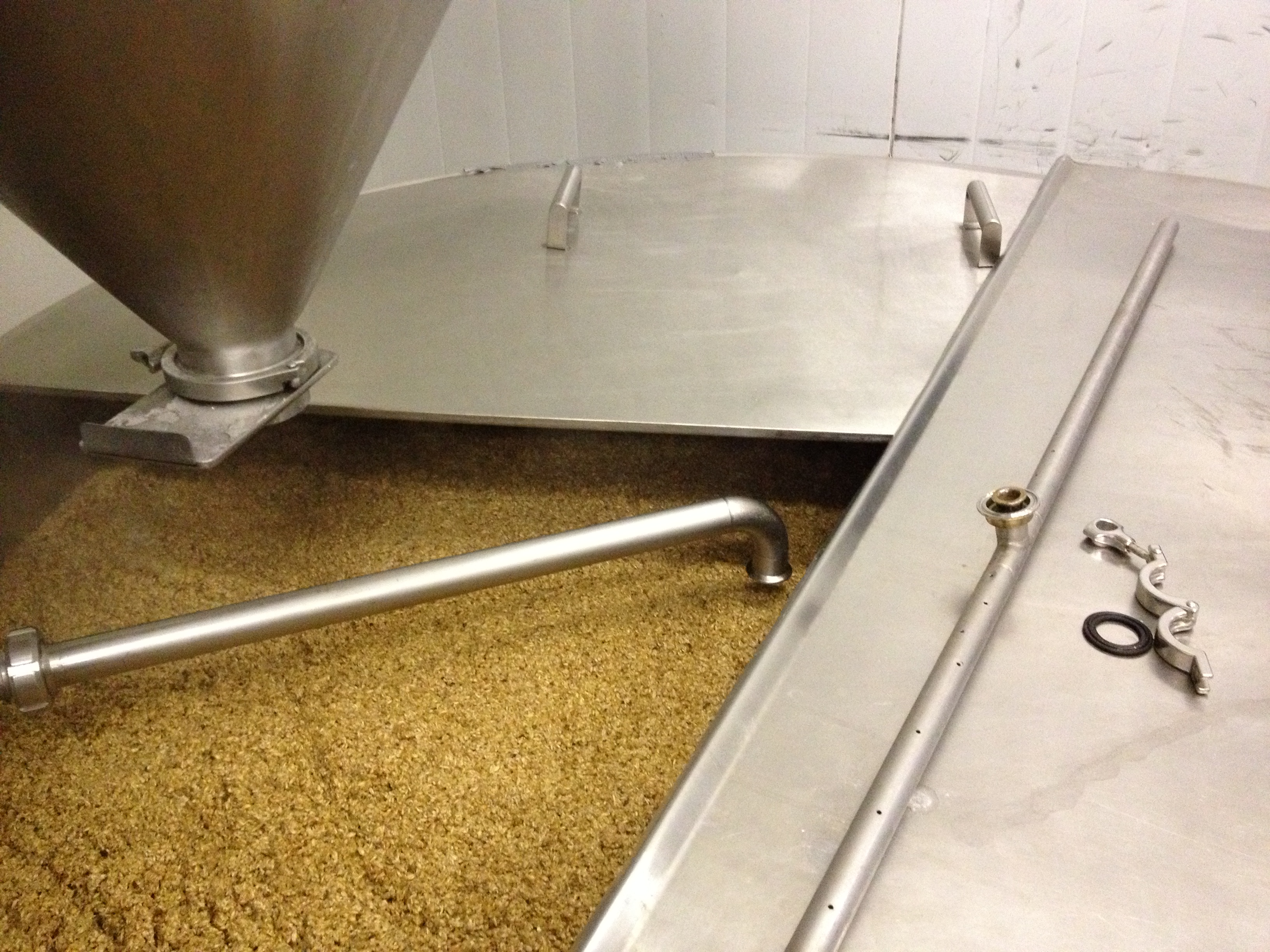 Halfway through the mash we took a temperature reading to see if we were in the right ballpark — not quite, we were about 2 degrees under than our target of 68C. So the first mash went a little low.

We hooked up the fly sparge arm and started recirculating the wort. They hooked up a smaller, open-top unit that allowed us a peek at the wort as it cleared up. 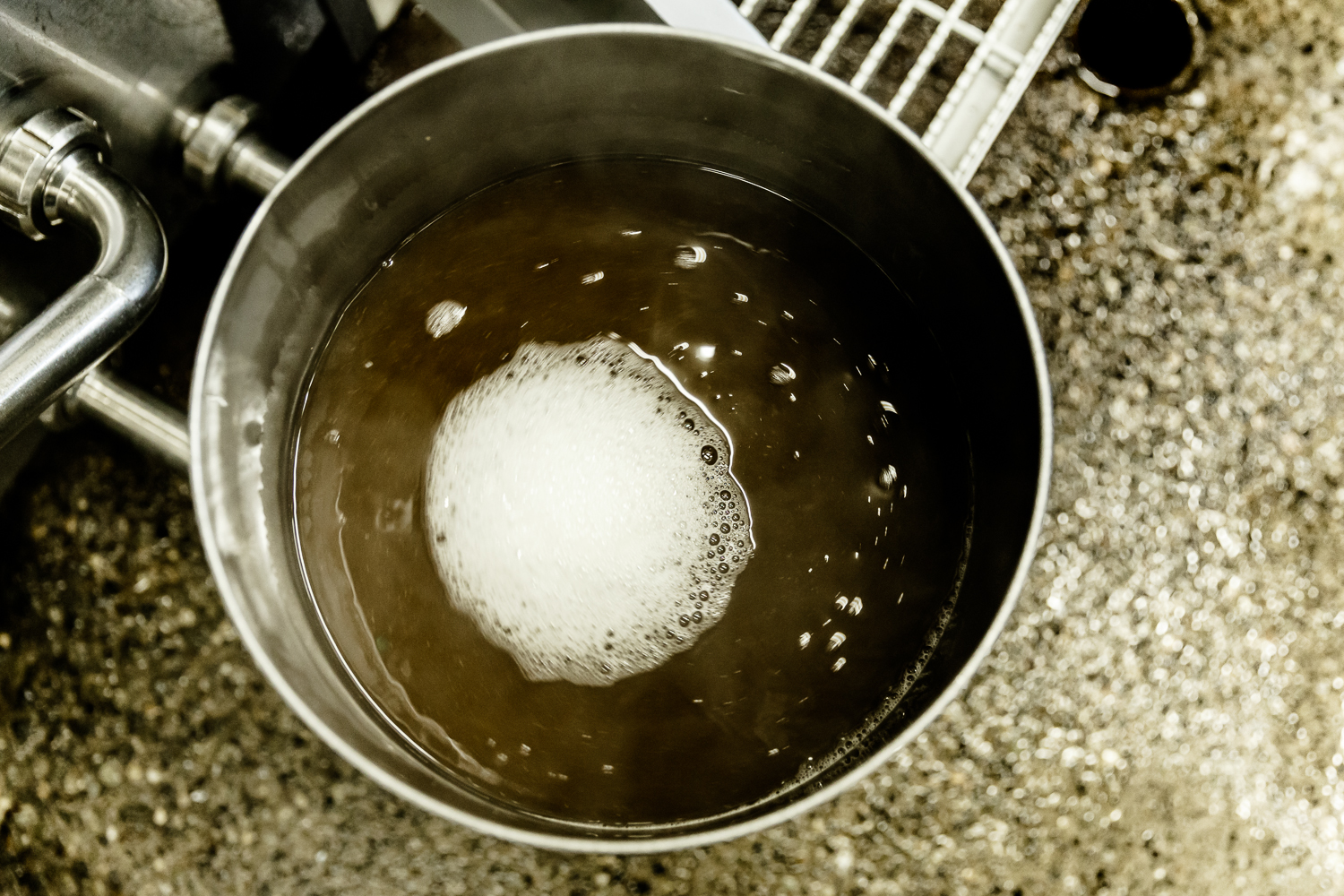 Once it was clear enough, Anders told me to stand back and braved a few gallons of hot wort spilling onto the floor as he switched a connector pipe from one intake to another on the flow control panel. Standard procedure, though it really wasn’t something I wanted to try myself the next time around. 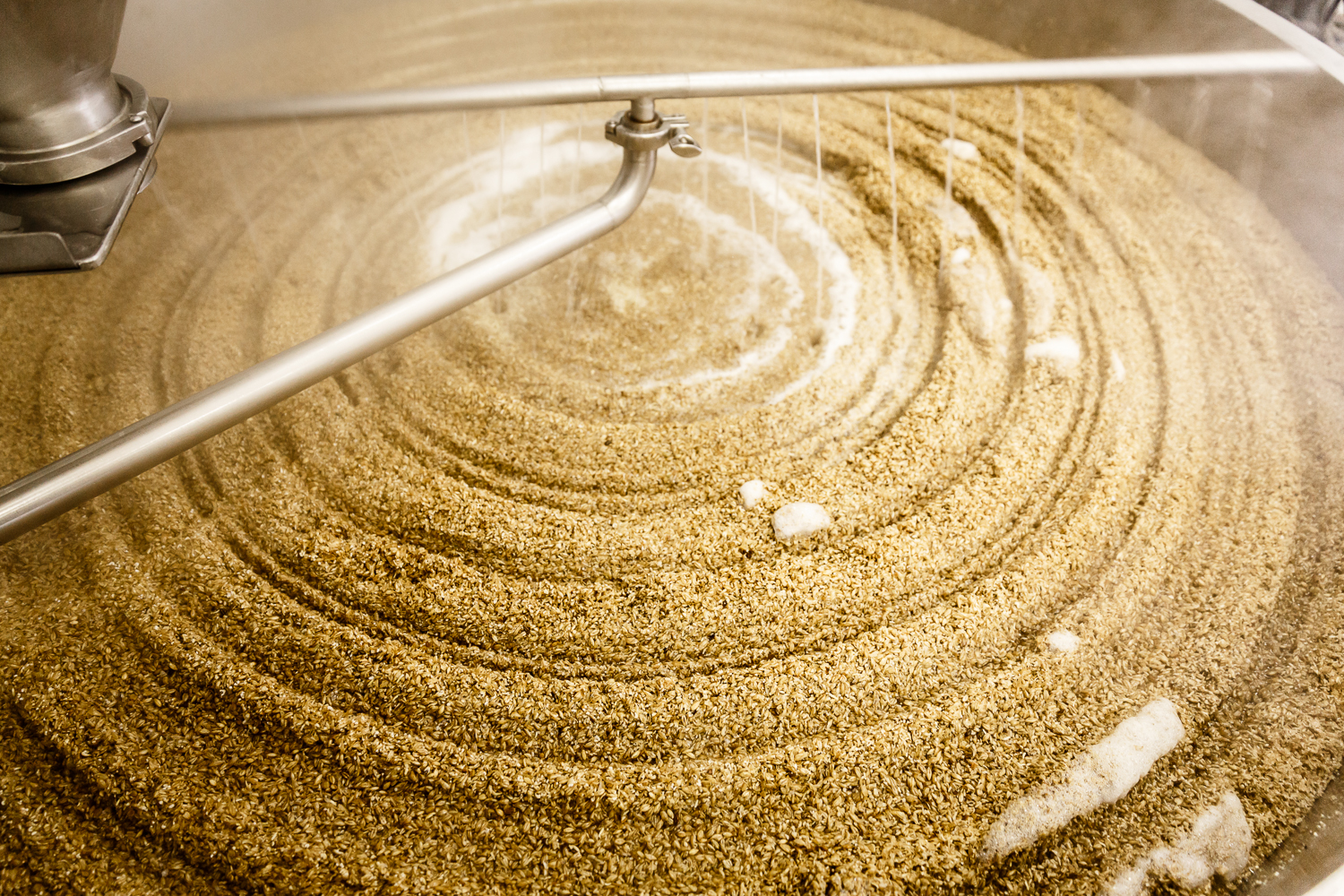 All the wort had finished transferring to the kettle, and after draining the rest of the tun we were left with 550kg of spent grain to dispose of. A large container was wheeled in, a shovel was placed in my hand, and I got to work. After 20 minutes of handing the shovel back and forth we had managed to remove most of the grain. By taste alone we could tell there was enough leftover sugar to make a decent-sized batch of pale ale if we had the spare kettle or a place to temporarily store 1400L of wort. Lacking either of those, the leftover sugars were about to make for some happy cows. I just wish I had the foresight to bring a carboy or two along for the extra runnings we had to dump. 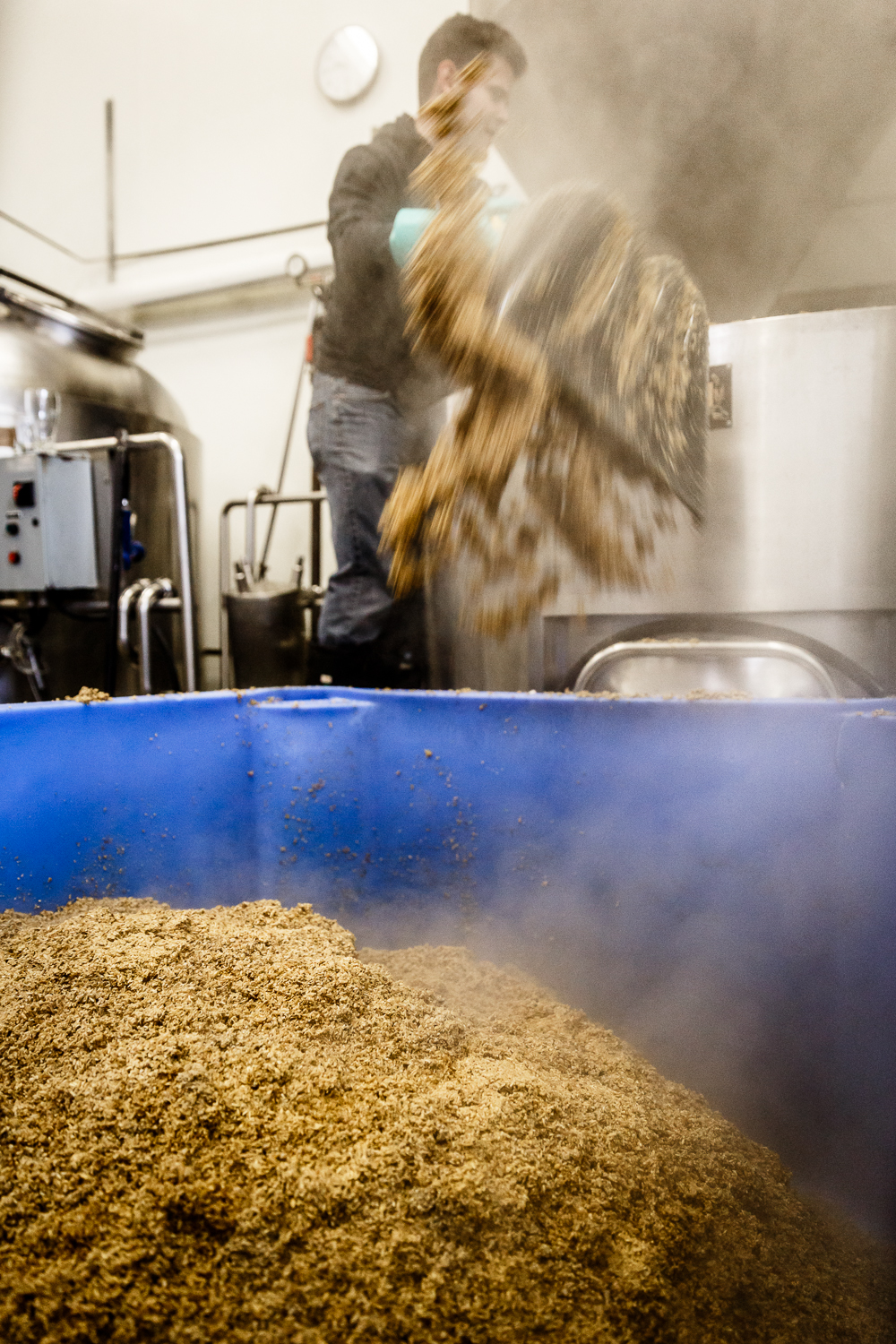 After getting such an early start my sense of time was totally off, but we finally reached the start of what would otherwise be a regular work day for me. Jack and some of the other Russell brewers (and Jonathan, my photographer for the day whose photos grace this post) strolled in with coffee in tow. Though, it’s entirely possible that we might have been working on glasses of pilsner already. I’m assured a normal brew day doesn’t look anything like the one we were in the middle of.

A quick check-in had us decide what to do about the wort in the kettle — we planned on a two hour boil already, but up to that point we hadn’t really considered what to do with the wort from the first mash while we waited out the second one. Didn’t take much to agree that the melanoidins produced during an extended boil couldn’t possibly be a bad thing for a barleywine, so we got the first batch of wort up to boiling temperature and let it sit there caramelizing as we got the second mash underway.

Halfway through the second mash we took another temperature reading; this time around it was two degrees over our target temperature, so splitting the difference between the two we figured we were close enough to the range we were shooting for overall.

More of the same. Recirculating, sparging and shovelling.

Shortly after noon we were ready to call an official start to the two hour boil. We took a gravity reading, and the 19.7° Plato / 1.081 SG pre-boil gravity suggested to me we were in good shape. More on that later. 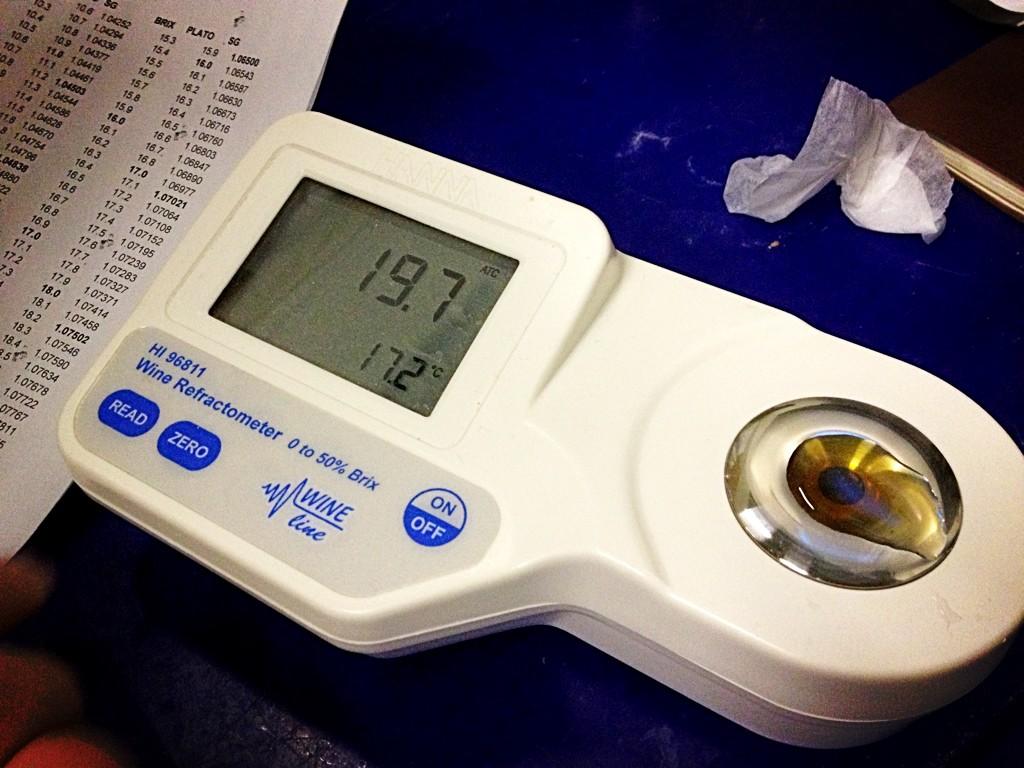 No hops would be added until the 60 minute mark, so the downtime meant it was a perfect time for lunch. As a dedicated downtown Vancouver dweller there are very few things I’ll give Surrey credit for, but the abundance of good Punjabi food is one of them. So our lunch ended being tandoori and butter chicken… pizza? Questionable fusion choices aside, it was damned good. Maybe that was the not eating since 5am talking. Or maybe it was the beer. 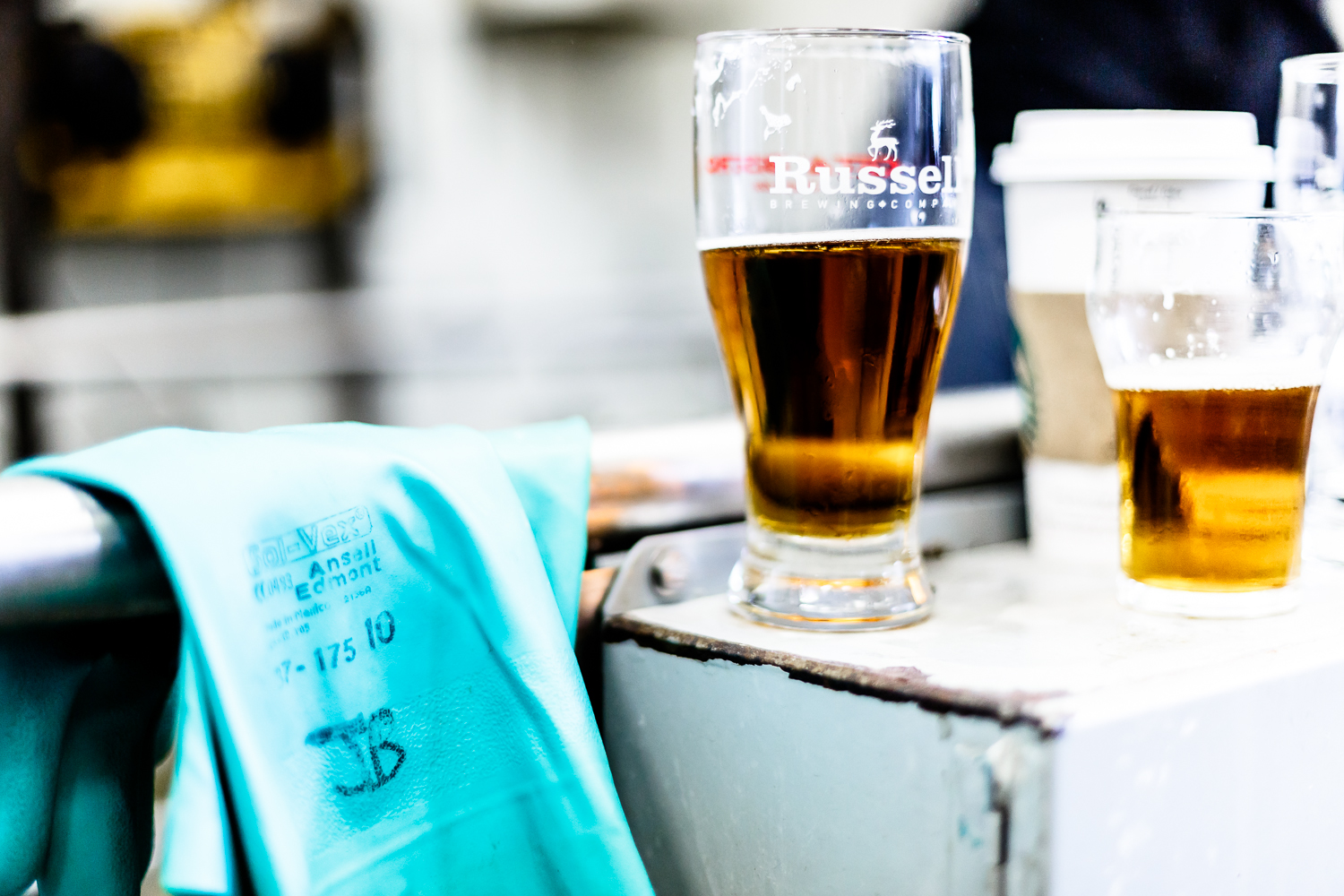 First hop addition at last! We weighed out something like two and a half kilos of Bravo hop pellets (Magnum wasn’t available) and got a ceremonial photo of the dumping of the hops. The thing about the relatively easy hop schedule of a brew like this is that after the boil starts, there isn’t much more to do. We also added the minerals around this point, a few doses of various white powders plus a pour of liquid CaCl for flavour. 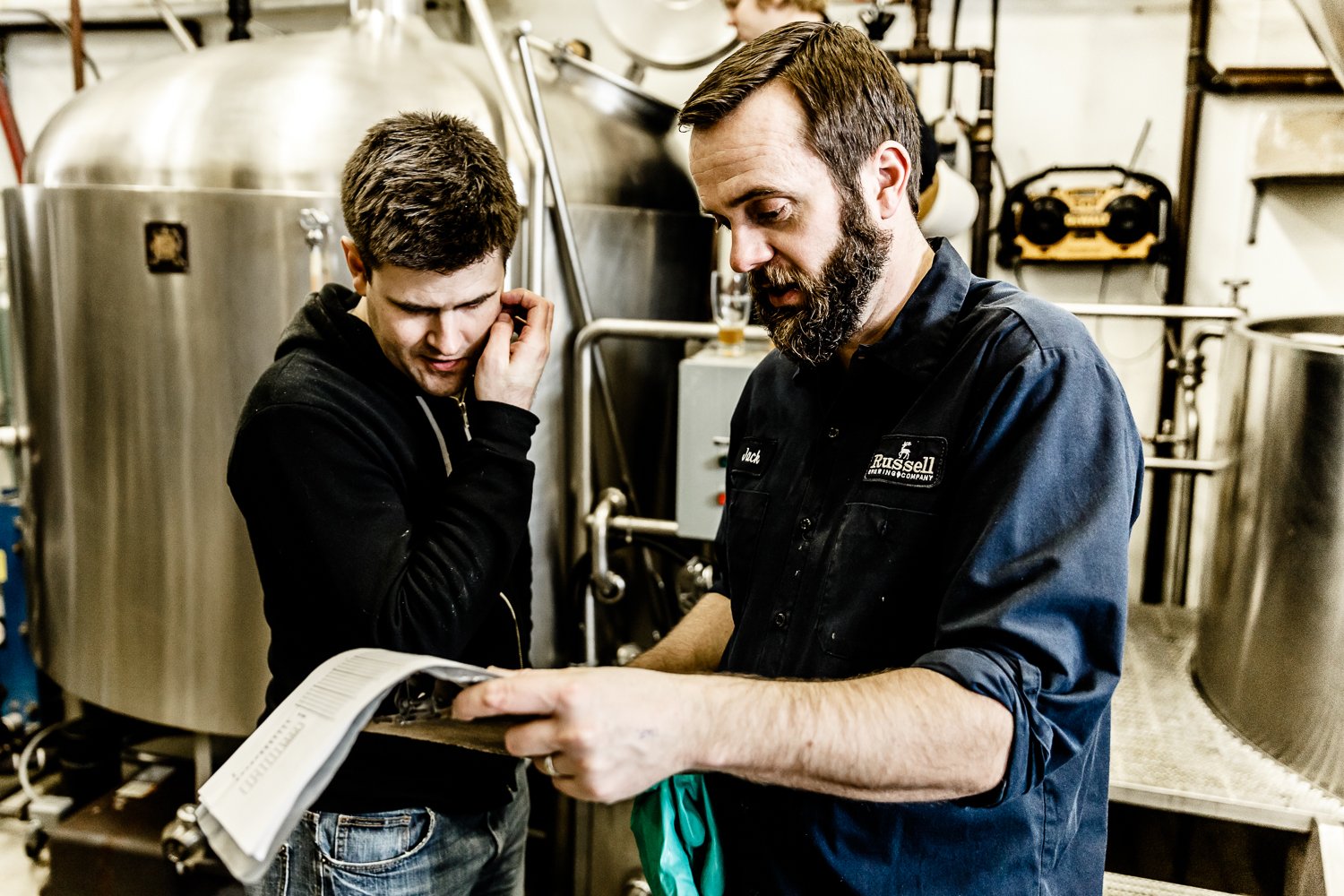 Final hop addition, 1.5kg of Goldings, and time to knock out the heat. At this point we essentially sealed off the wort to the outside world by closing the kettle lid and doing everything else internally. There wasn’t much more for me to help with, most steps required some deeper knowledge about how the brewery is set up. We whirlpooled, then set up some transfer hoses and sent it through a heat exchange on the way to the tank. 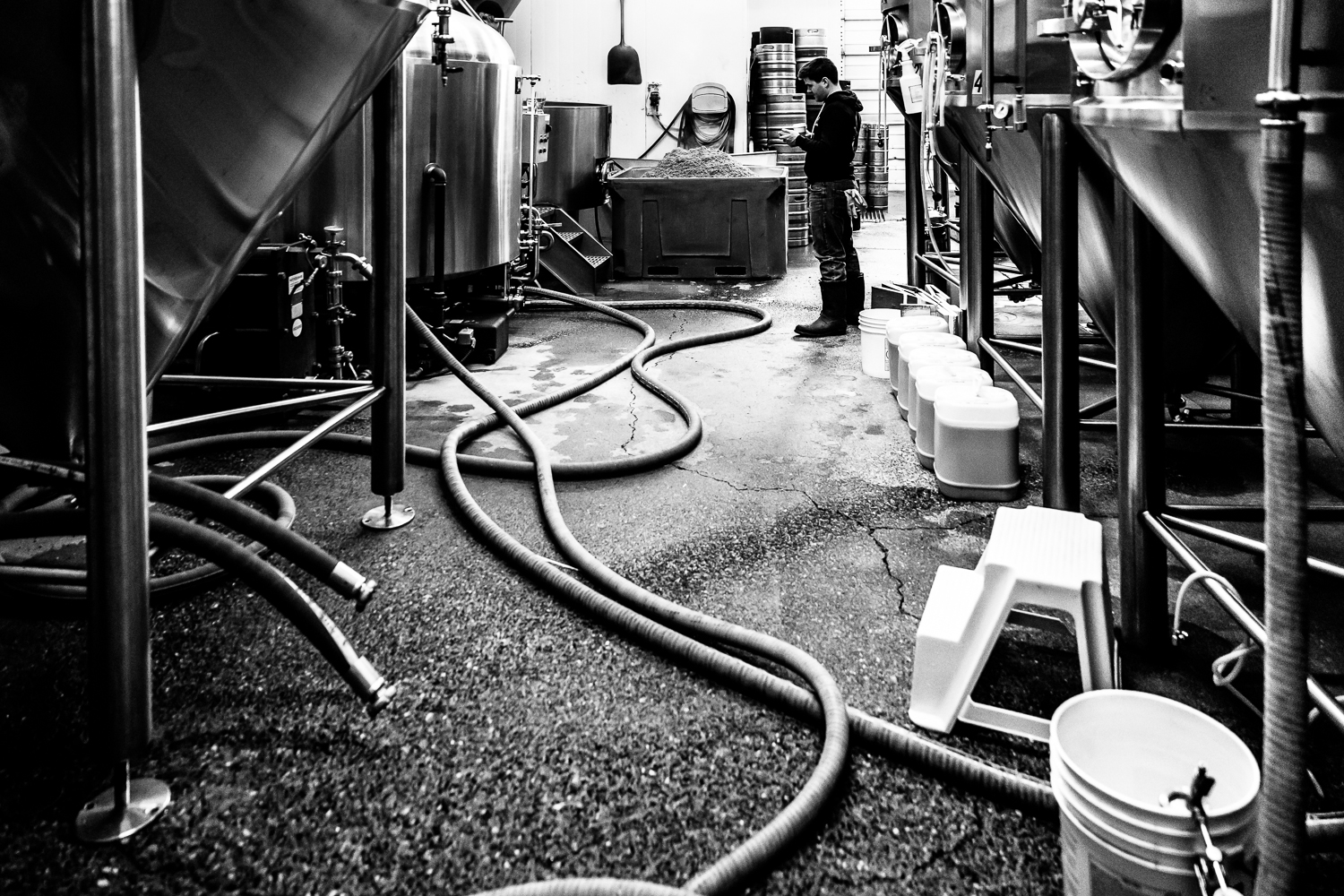 The way breweries pitch yeast is quite a bit different from how homebrewers do it. Instead of a direct addition to the tank, we cleaned and sanitized two corny kegs and poured the yeast into those. The hoses from the heat exchange fed directly into the kegs and picked up our yeast pitch on the way to the tank. I guess it makes sense as a way of minimizing air exposure, though I wasn’t quite clear on the full reasoning behind it. 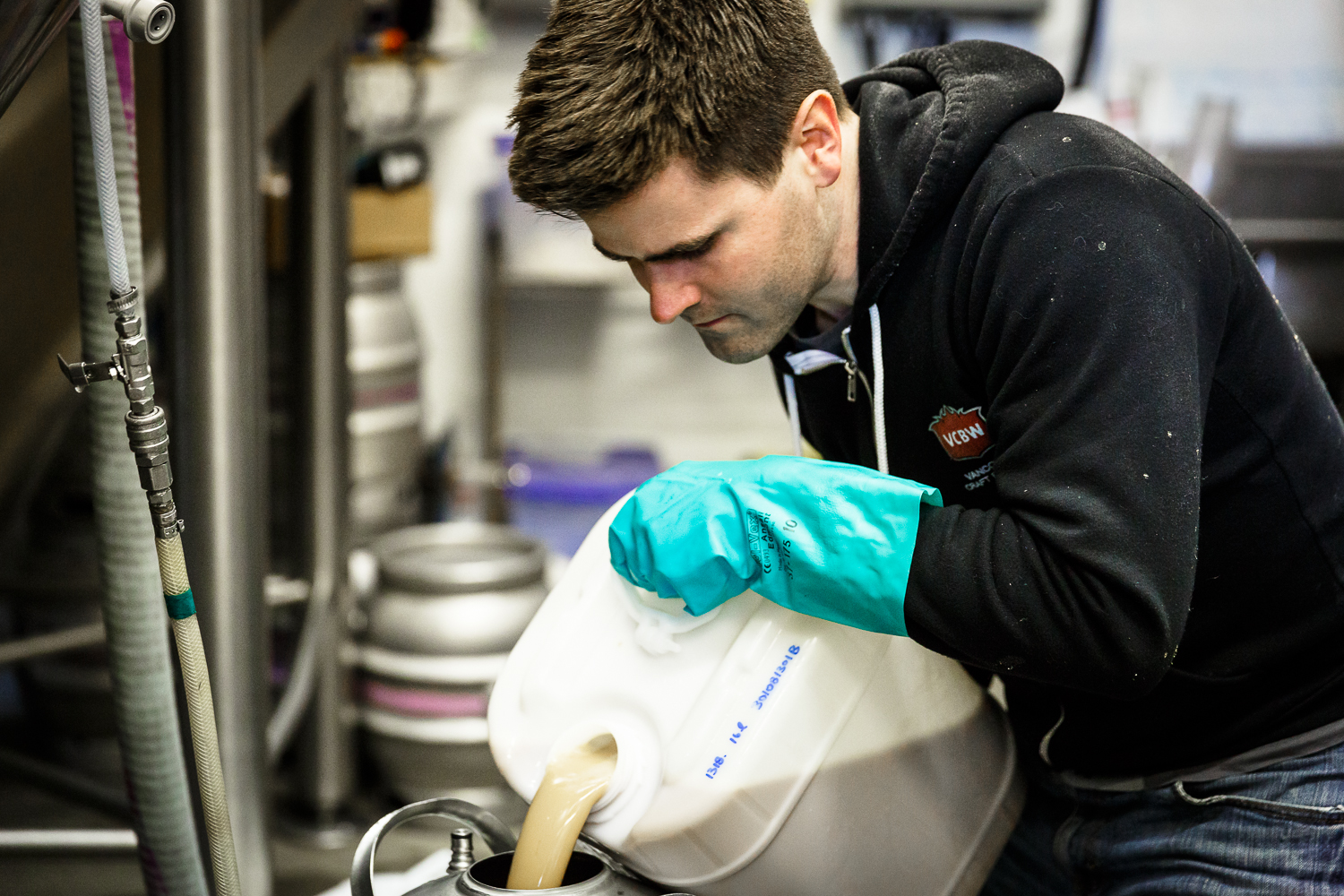 And the post-boil original gravity reading came out as 20.5° Plato / 1.085 SG. On the initial reading I thought we were in good shape, but Jack explained that on a larger scale, your evaporating isn’t nearly the same as on a home brew scale, so you don’t see much more concentration of sugars during the boil. Seems obvious in hindsight, but I was counting on at least 10 or 15 points extra after the boil. 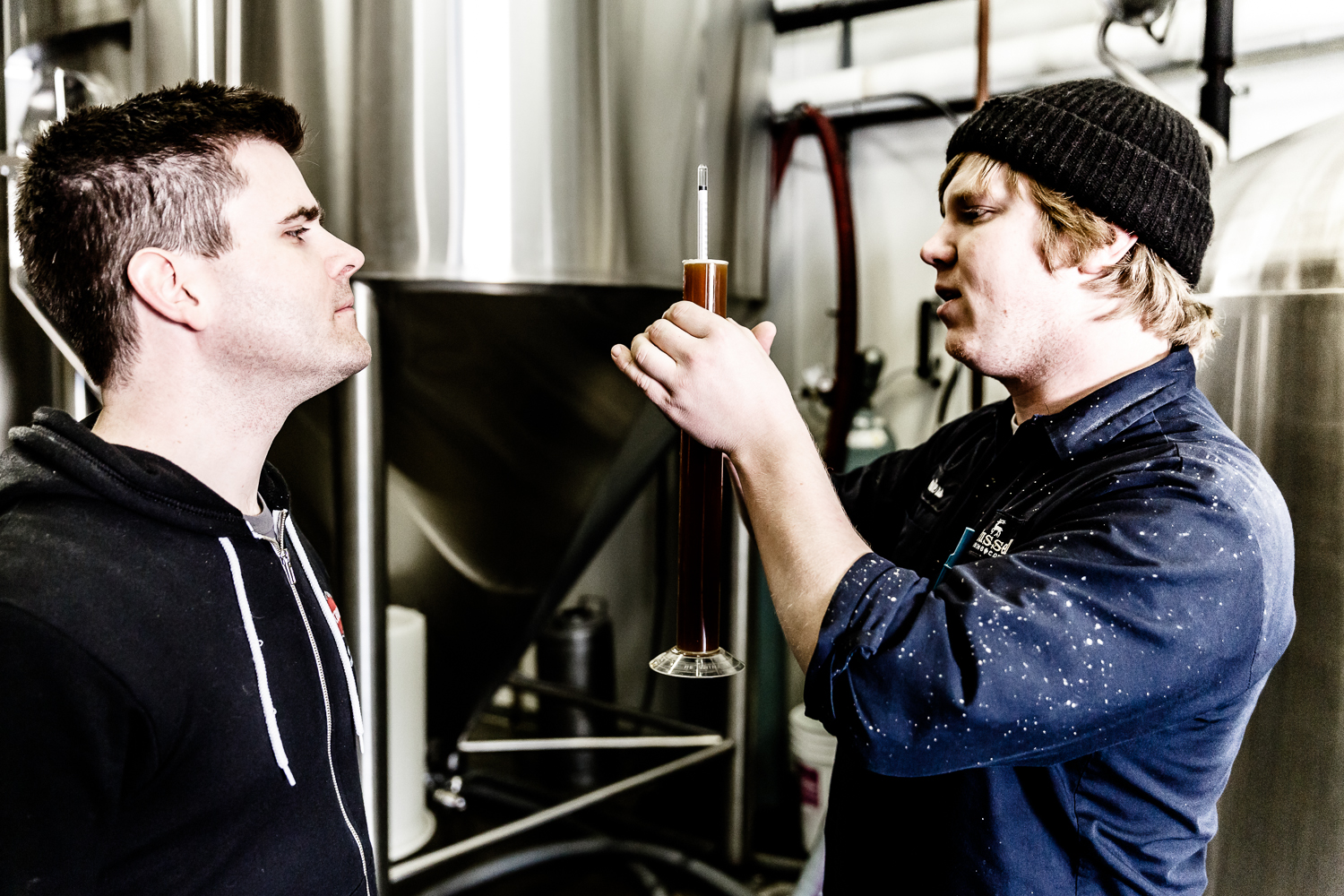 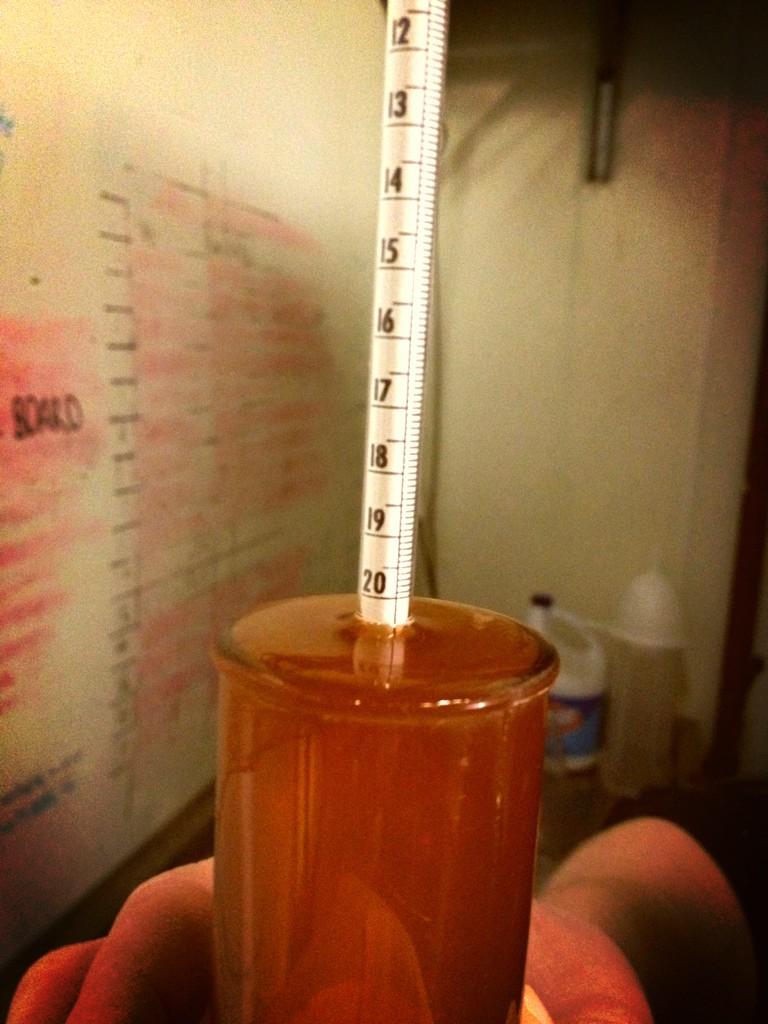 After finalizing the transfer and cleaning up, chatting about the next steps, it was time to call it a day. I headed back to Vancouver and spent the rest of the evening waiting as long as I could before passing out. I’m not cut out for the early shift.

I couldn’t be around to watch the progress of the brew, but fermentation took off quickly and finished out after a week or so. I wasn’t sure what to expect; either we’d end up with a sweeter 8% range beer that we’d have to consider reclassifying as an Old Ale or similar, or we’d get something closer to 10% with a substantially thinner body than my original batch. It ended up being the latter, with a finish of 3.8° Plato / 1.015 SG, bringing it up to 9.5% ABV.

Jack mentioned that another difference between a commercial brewery and a home brew system is they’re used to much higher attenuation. I might have tried to compensate a bit more during recipe formulation if I had known at that time what to expect, but even at 1.015 it should still have enough body to prop up the alcohol and malts.

5 weeks after brewing I sampled an uncarbonated bottle straight from the tank; lots of warming alcohol and fruit esters, a reasonably chewy mouthfeel despite the lower FG. It’s obviously still really young, but tasting quite a bit better going into ageing than my home brew batch. I’ll keep this post updated as it progresses.

Photo credit: all of the good photos are courtesy Johnathan Evans of beerimage, the rest are mine..


7 Responses to Commercial Brewday at Russell