Well, my plan to reuse the 031 yeast cake for an imperial stout didn’t quite work out. There’s a likely move in the near future, which means batch-aging isn’t an option right now. In fact, I highly suspect this is my last brew for a few months until I figure out the variables in the new place.

So, big hops it is. For the third year in a row (1, 2) the Christmas/New Year holiday break saw a double/imperial IPA brew day. Seems like a good tradition to keep alive.

My willingness to go heavy-handed with the hops has steadily increased over the past two years; I got stuck in the 8-10oz per batch range for a while, then took a big step up to 13.5oz for 030. With this one I’ve decided to go for a full pound, with 11oz in the boil and 5oz reserved for dry hopping.

Mash results were well in range, though I second-guessed my hot strike temperature and added some boiling water which resulted in a warmer than normal start. But I dropped it down to the right range for the latter 3/4s of the mash, and given my seeming ability to highly attenuate most of my beers, I doubt it’ll be a problem. 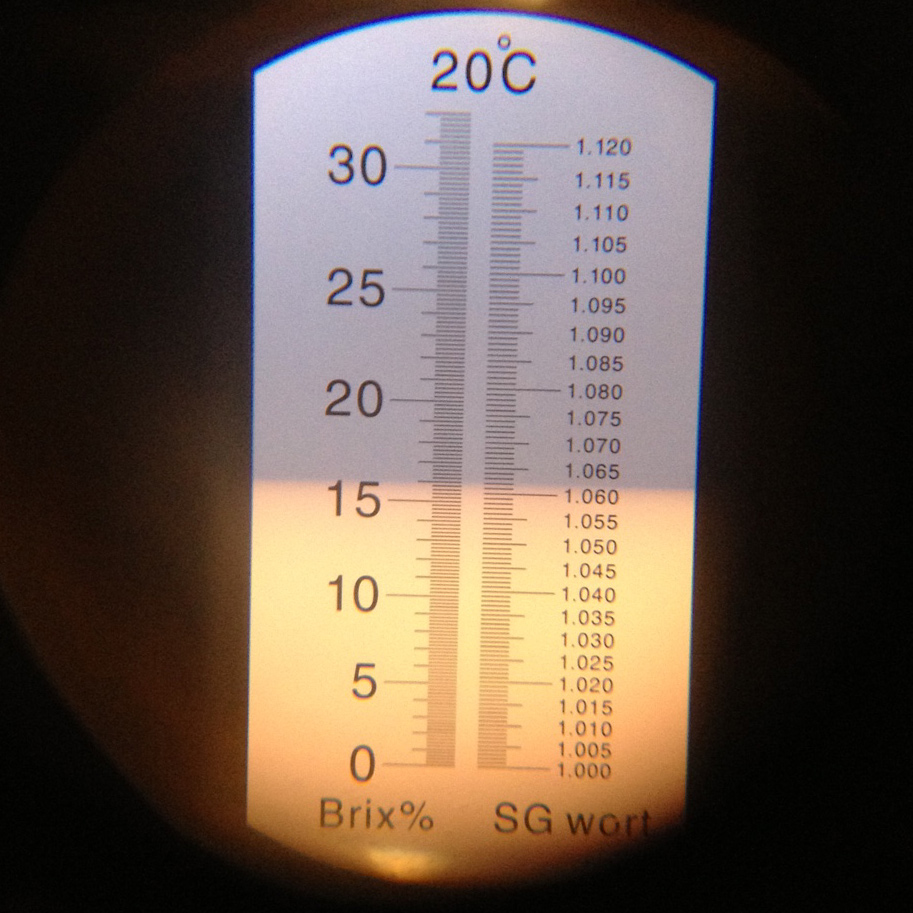 I bought a refractometer sometime between my last brew day and now, and this was the first time I really got to try it out. I found myself taking readings a lot more often, recording the first runnings and tail end of the sparge, as well as the pre-boil and post-boil gravities. I also used it to boil down a batch of second runnings from 1.020 to 1.055 and reclaim a bit of wort to play around with — jury is still out on what that’ll become, but previously I would have just dumped that wort, so the refractometer is already coming in handy.

I went with a 90 minute boil to try and reduce all signs of DMS. While I’m constantly playing around with my hop schedule during the boil, I prefer most of my bittering at 60 minutes and a lot of aroma hops much later on. I pretty much don’t do 30 minute additions anymore, leaving all of my flavour additions for the last 15 minutes. Or in this case 10 minutes. I split my pellets into three additions, roughly 2.5oz at 10, 5, and flame-out. And 2oz of Simcoe were kinda-sorta continuously added during that time, with a small pinch added every thirty seconds. The continuous-hopping during last year’s 021 was a pain, so this felt like a reasonable compromise.

After the boil I again tried the ice block trick I came up with for 031 which, in the absence of insulating foil, worked quite well this time. I managed 35C in a half hour, which beats almost all previous batches. Of course that ice also diluted my wort quite a bit, so I lost maybe 0.5% ABV as a result (but got at least another bottle out of the batch). Small price to pay for quicker cooling.

Usually I add sugar during the boil, but just like 030 I forgot to add it. This time I was unhappy with my final numbers being 20 points off, partially due to lower efficiency and partially due to ice dilution, so I added it post-fermentation as a (boiled then chilled) syrup. I’ve read plenty of advice suggesting that larger amounts of sugar should be added post-ferment, so I’m not worried about adverse impact on the beer. If anything I worried that the remaining maltose wouldn’t quite finish out after the yeast get lazy with the sugar, but it fermented out without an issue.

Dry-hopping was interesting. I wanted to go bigger than normal this time to keep up with the increased kettle hops. That caused problems during packaging — I’ve taken to wrapping a hop bag around the end of my hose while transferring from the carboy, but I usually see a pretty clean transfer with only a bit of accumulated hop mass piled up in the bag. This time I ended up with a big chunk, to the point where I watched leafy chunks fly through the line during most of the transfer. No harm done, the final bottles are fairly clean, but the hose did clog up at one point which made me stop and fix the line. 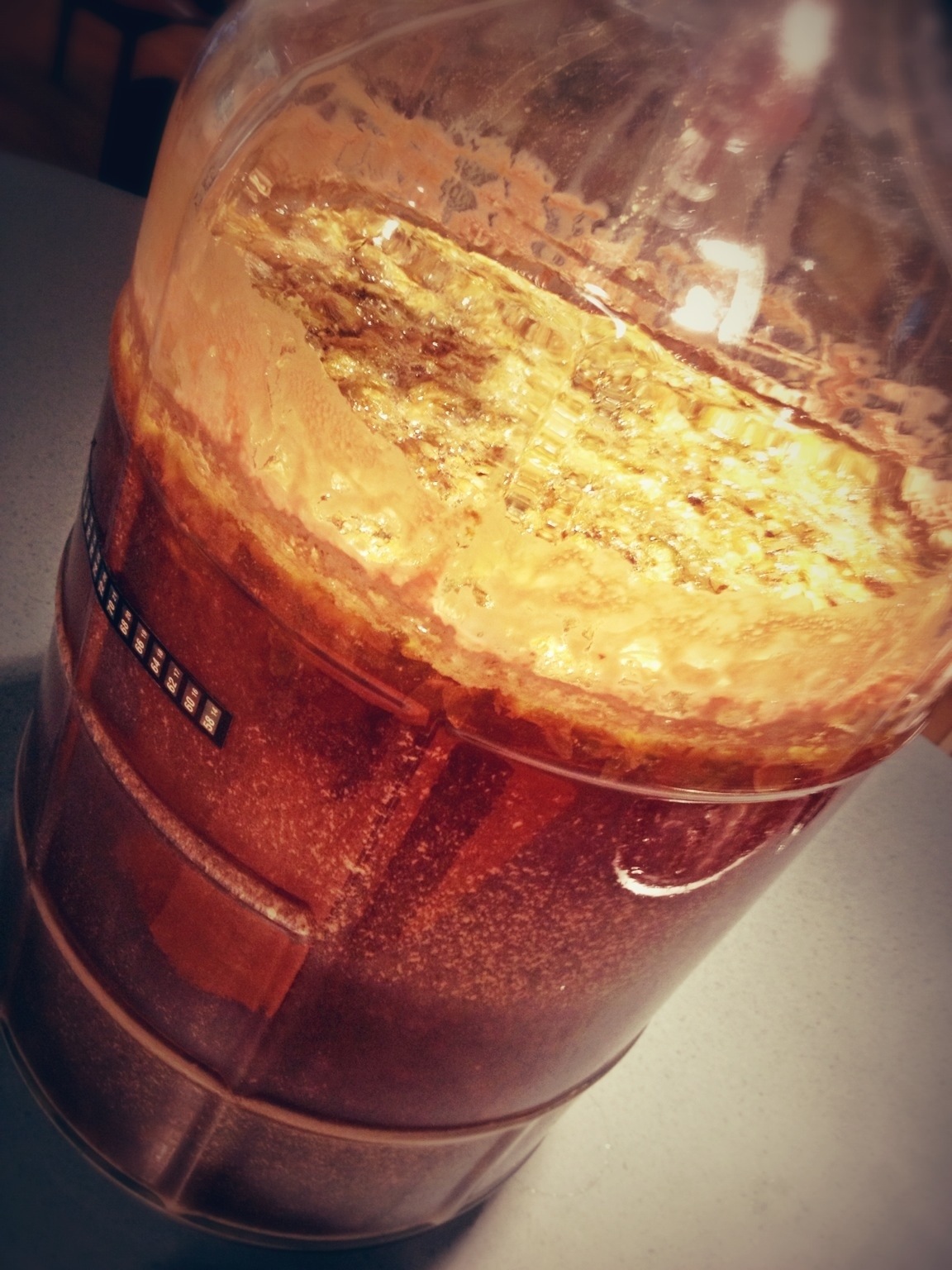 Floating hop matter, a sight only a homebrewer could love.

I considered adding Pacific Gem as the final 16th oz of hops during dry hopping, but experiments with it ended up too grassy for my liking. I decided not to use it in the end and didn’t get a full pound of hops in there, but at 15oz is pretty darn close.

Tasting like a champ while still flat, I’m excited to see how this one develops as the bubbles build up. I can already tell that I will be brewing this recipe again, and probably soon.

Ugh. Spend all that time making an expensive beer, then get foiled at the very end with a disappointingly undercarbonated final product. I’m not sure what went wrong with bottle conditioning, but six weeks after bottling it was finally starting to build up somewhere close to the right amount of fizz. Needless to say, I didn’t want to wait nine weeks to drink a DIPA, so many nearly flat bottles were consumed. Near the end some managed to build up about the level of carbonation you’d expect, but the batch overall left me a bit disappointed.

The recipe is absolutely fantastic, there’s something magical happening with that particular hop combo. Fruity citrus and blueberry notes with grassy and tropical undertones. I’ll most certainly be making it again, but I think by the time I’ve settled into the new place and figured out my brewing setup, I’ll have finally made the leap to kegging and won’t need to worry as much about oxygen pickup or bottle conditioning. A 6/10 for potential, but this batch just didn’t quite deliver.