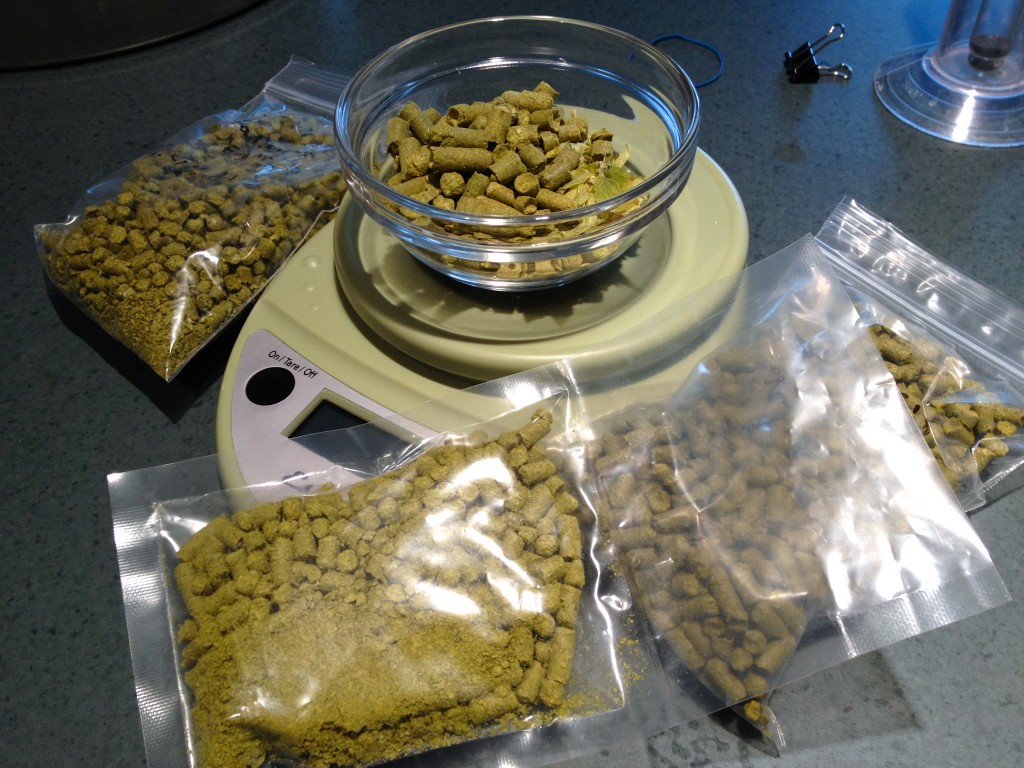 With the slower brewing schedule lately I’ve managed to accumulate a good whack of hops that really need to get used. I had some Falconer’s Flight and a 7-C hop blend of all the popular IPA hops, along with a ton of Amarillo, so I decided a kitchen sink IPA was in order. 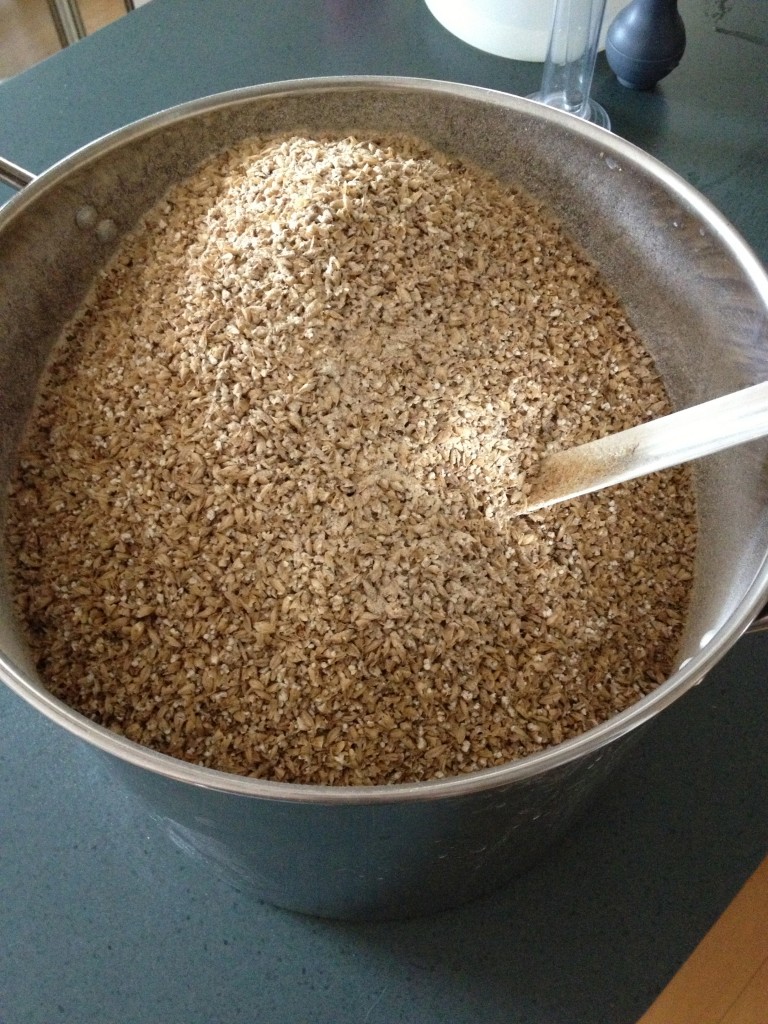 I backed off of the Crystal malt this time, I’m still going back and forth a bit but I think I prefer some toastier Munich and bready Biscuit notes over sweeter Crystal flavour in my IPAs. I usually use a pound of sugar or so to keep the body of my IPAs drier, but forgot it in the boil this time and decided after primary fermentation that I didn’t need it. At 1.009 it’s dry enough.

9oz of hops in the boil, split between the three packages and favouring late additions, with another 3oz added in two separate dry hop additions. Oh, and an ounce and a half in the mash to kill some smaller bags of leftover Chinook, Centennial and Amarillo. Should be hoppy. Despite a fairly aggressive vorlauf, my wort turned out awfully murky. I guess the lupulin is to blame? Yeah, should be plenty hoppy. 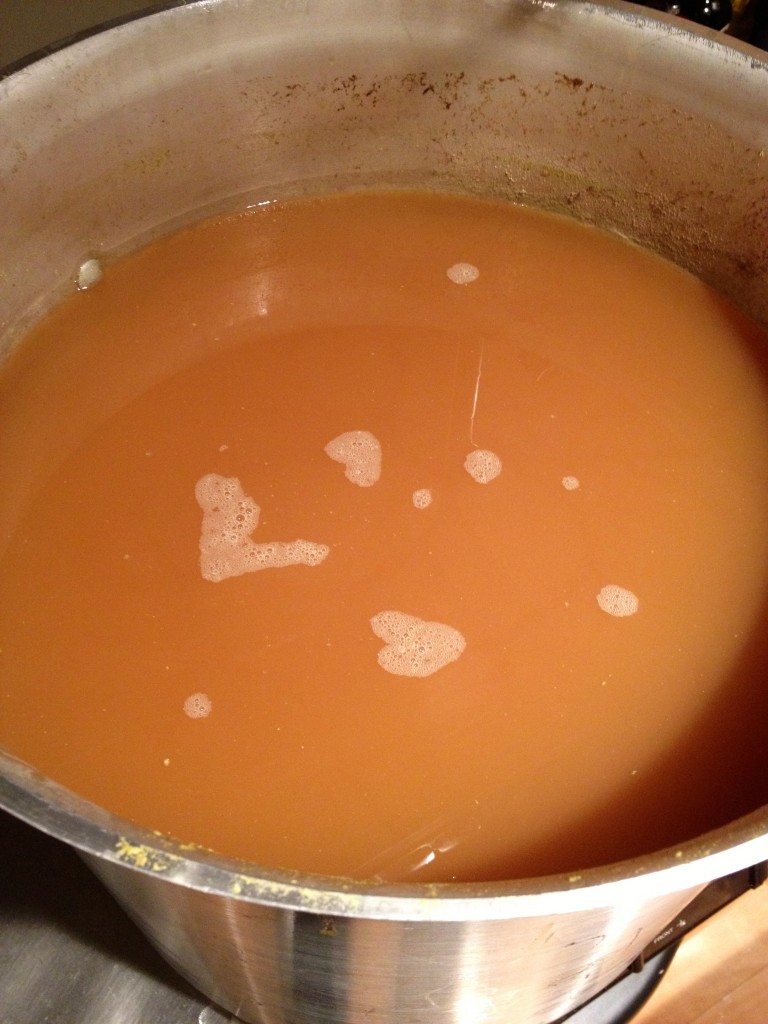 After #025‘s temperature mishap I made sure to keep a close eye on the thermometer during primary fermentation. And I’ve noticed that sticking my beer in the fridge for a week or two really clears it up, so for a while now I’ve been thinking I need to drop out more yeast before bottling. After fermentation had finished I started swapping out ice packs regularly for a week to get it down to 13-14C and try and crash out as much yeast as I could. Seemed to work nicely, the bottom of the carboy had a thick, tightly-packed layer on the bottom and the wort was nice and clear on transfer. It took a bit longer than normal for my bottles to carbonate, but given that they usually take off like rockets and end up fizzy in under a week, that’s hardly a problem. 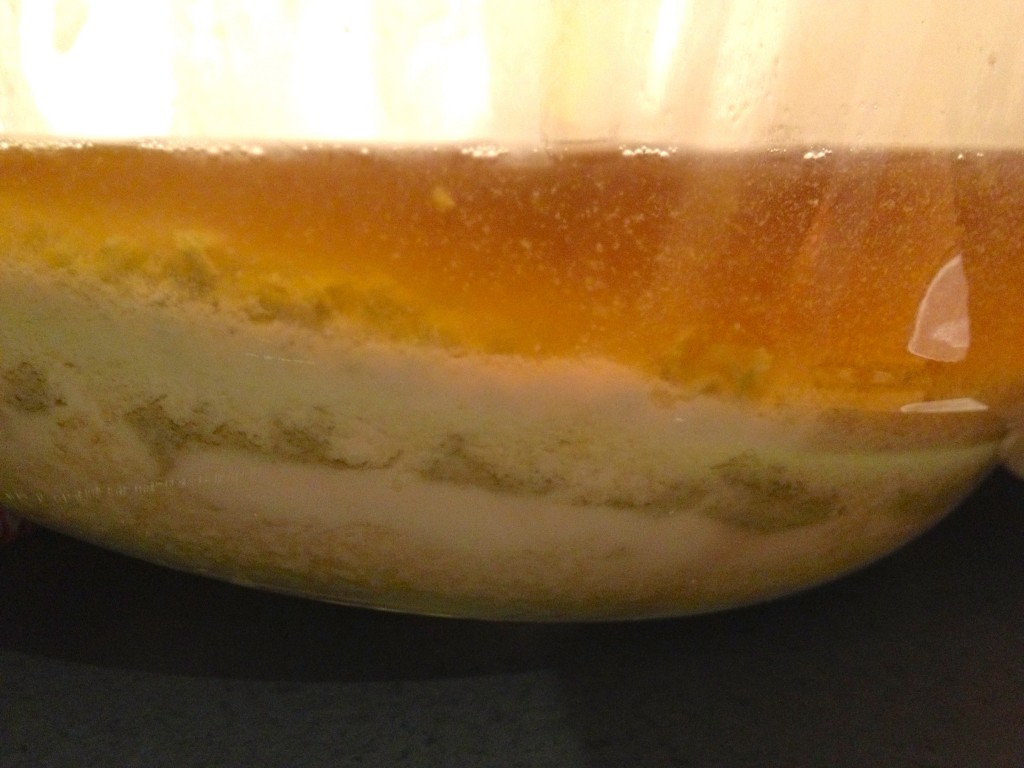 The first bottle I cracked a week and a half after bottling was plenty carbonated, with an oily resinous hop flavour and a ton of grapefruit. So, pretty much exactly what I was going for.

The early bottles in this batch were pretty spectacular, and received very positive feedback from the local homebrew club. After about a month and a half they’d tamed down considerably, allowing me to pick out some things to change for the next batch. I’ve been operating under the assumption I prefer the drier cereal/biscuity notes of Munich and biscuit malt in my IPAs, but as they became more evident I realized I’d rather go for more caramel sweetness to balance the hops.

And since this was more than anything a freezer sweep of various hops I had on hand, my bittering hop blend or mash hopping probably wasn’t the cleanest; when sampling after commercial IPAs I noticed a slightly leafy vegetal character to it. Noted for future reference: clean bittering hops are a good goal to shoot for.

And my lack of proper chilling is continuing to be a problem; I taste trace amounts of DMS underneath the faded hops. Not enough to be off-putting, but I can tell that my new challenge when brewing is to finally figure out this chilling/DMS problem.

All in all, me and many others did quite enjoy this batch, so it’s a solid 7/10.