It’s been ages since I’ve had anything in a carboy. A lot of boring reasons for that, but I finally found the time to brew up a batch this past weekend. 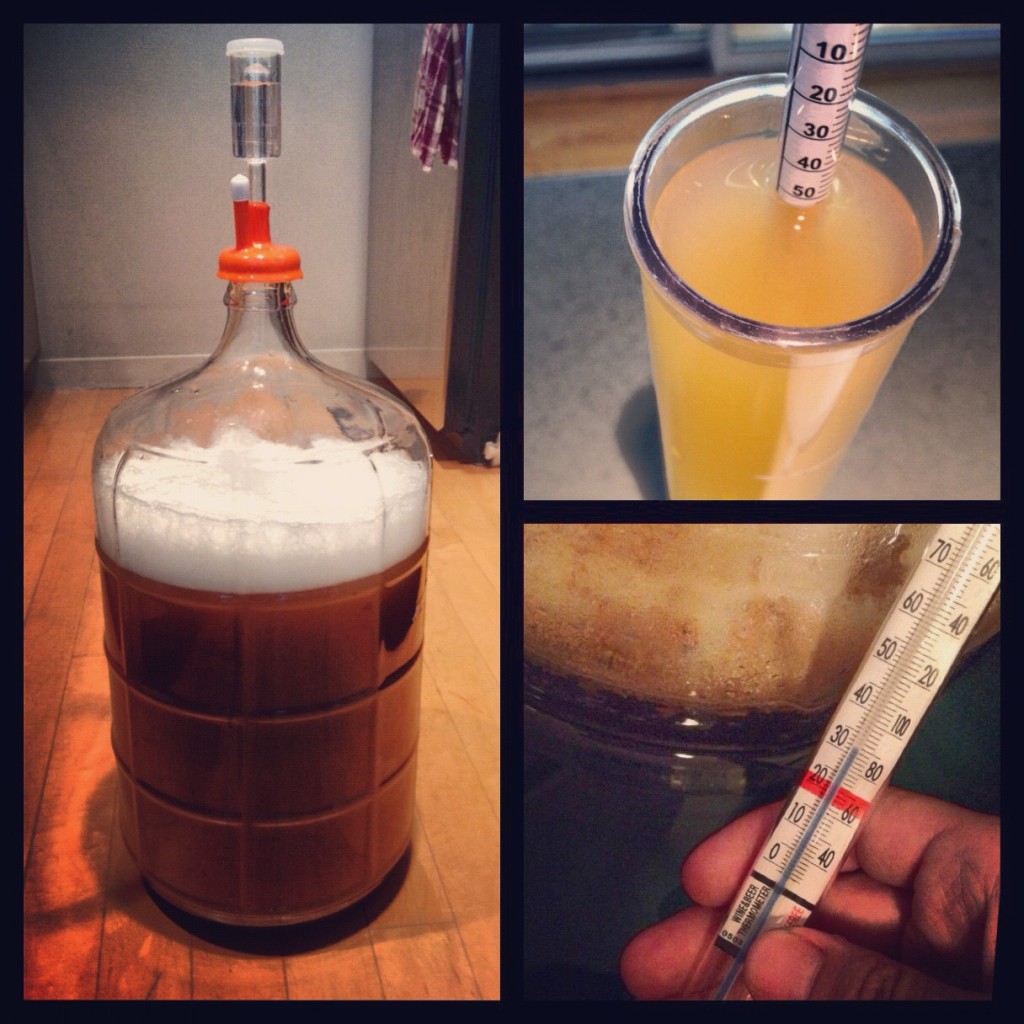 Since it’s finally summer in Vancouver, my ability to keep fermentation temps down is a bit hindered. Perfect opportunity to try some hot-fermenting saison yeast. After my experience with #24 I’ve decided I’m done with pilsner malt, it’s just impossible to blow off enough DMS in my system. 2-row isn’t exactly the most authentic choice for a proper saison, but there’s no question the result will be better this way.

I’ve had a couple of really nice homebrew saisons at the local club in the past few months that have played around with fruit and spices, so I decided to try doing one along the same lines. I figured 3lbs of fruit in #16 would be on the low side to only give a hint of fruit flavour, but it was still quite noticeable. So I’m going to go with 2lbs of local seasonal fruit, I’m currently thinking peaches and blackberries. I’ll also be doing some spice trials the same way I’ve been doing dry hop tests recently. Cloves, coriander, cardamom, black pepper, and maybe rosemary are on my short list.

I looked at a few saisons while designing the base recipe, but the common factor was they were all pretty simple; I went with 2-row, 20% wheat malt, 5% Vienna and 5% candi syrup to dry it out. I have some uncommon hops on hand I’ve been meaning to use, and the flavour profiles of Calypso (apple, pear) and Nelson Sauvin (Sauvignon Blanc) seemed like they’d complement my ultimate plan of a fruity, spicy saison. I used Calypso at 60 and 15, with Nelson to finish. 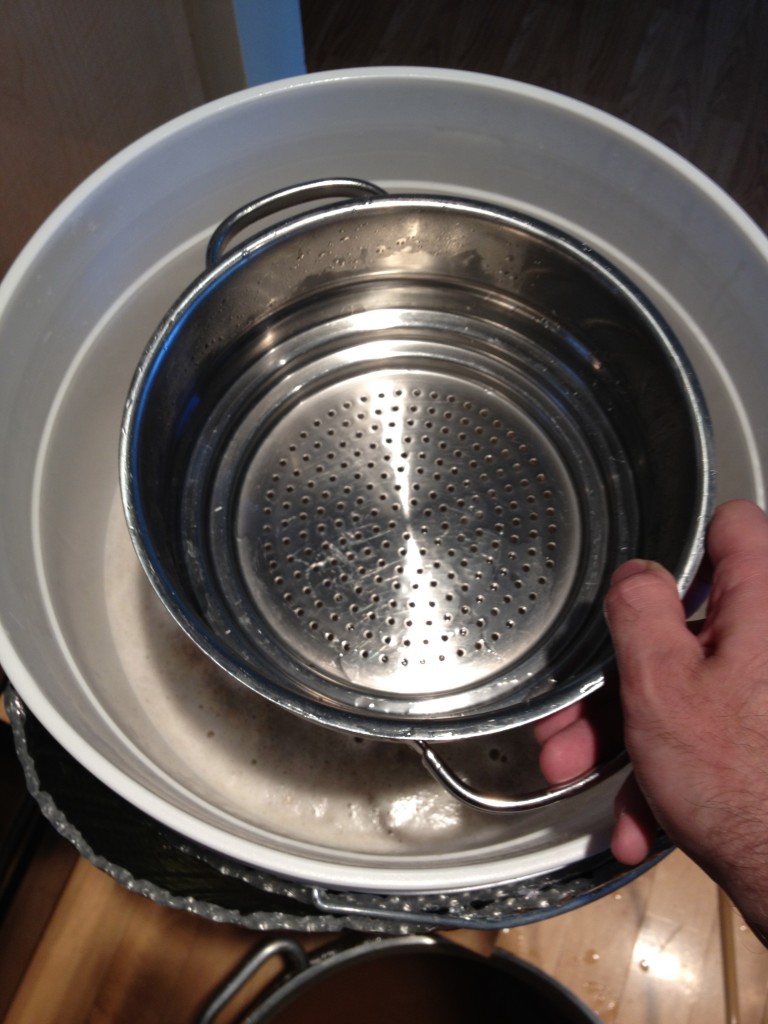 Brew day went well enough. My mash temp was pretty close to spot on, maybe a touch high at 150 but should be totally workable. The boil couldn’t have been easier, and a few new tricks helped me cool the wort a bit faster. My bathtub immersion chilling is partially to blame for my pilsner malt DMS problem, so I’ve taken to freezing a few liters of water and dropping the blocks right into the wort at the end. I’m not concerned about the dilution, and the chilling benefits of large chunks of ice were pretty immediately apparent. I got close to room temps in 30 minutes, down from my usual 45. Not a huge win, but it was something. 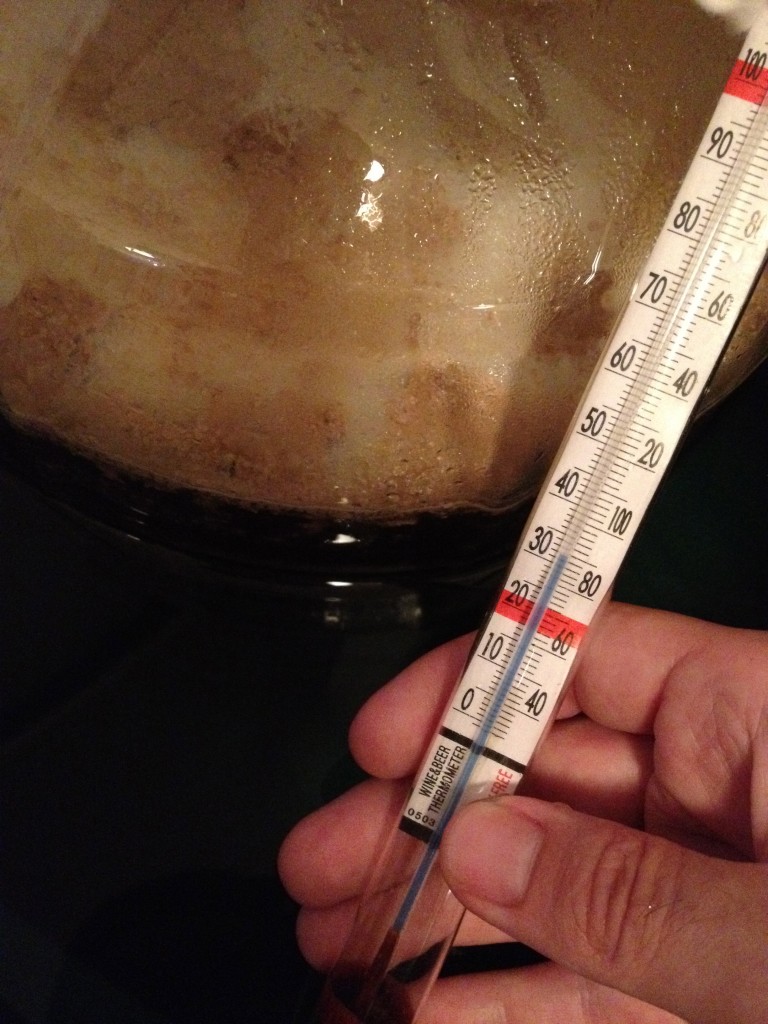 The fun part about brewing a saison with Belgian yeast is of course the temperature. My usual procedure of floating the carboy in a water bath and swapping out ice packs to keep the temperature around 18C has been flipped on its head; I’ve closed off the carboy in a room that picks up a lot of heat during the day, and instead of ice packs I’m topping off the water bath with a kettle of boiling water twice a day. I’ve maintained 30C pretty consistently for the first couple of days. I’ve seen posts from other first time saison brewers who can’t bring themselves to go that high, but I figure if Wyeast is telling me that’s what the yeast likes, that’s what the yeast is gonna get.

After a week and a half of fermentation, it’s still at 1.028 but definitely starting to shape up. Complex spicy yeast notes dominate, I’m looking forward to where this one is going. Looks like 3724 is living up to its reputation though, it’s gonna be a while.

Well over two weeks into fermentation I added the fruit. A pound each of blackberries and peaches, both were frozen to sanitize and break down cellular walls. I debated how I’d add them; I thought I’d rack the beer first, but as it was clear the yeast was going to take a while I decided it was probably better to add the additional sugar sooner rather than later. I wondered a bit if the simple sugars will make the yeast a bit lazy on maltose, but committed myself anyway.

After another week and a half I was starting to worry about mold so I racked off the fruit. The gravity had lowered, but after a month I still needed to lose ten points. I could have waited it out, but I had a half packet of champagne yeast kicking around so I decided to pitch it to help speed up the batch. A week and a half later it had dropped down to 1.006 and finished up, so it was time to bottle.

The first few bottles have been all over the place. Some are great. Others have a noticeable high-temp fermentation problem from the champagne yeast addition. Still others are phenolic as hell. There’s no consistency in this batch so far which, I guess, makes it a fairly true-to-character farmhouse ale? Yeah, let’s go with that.

The phenols eventually died down, but the inconsistency from bottle to bottle remained evident. Some where straight up amazing, others were plasticky and one-dimensional fruity. Some had same saison funk and balancing tartness, others were jammy with big fruit flavour. Nothing about it was expected, but for the rare bottles that shined, I feel an overall affection for this batch.