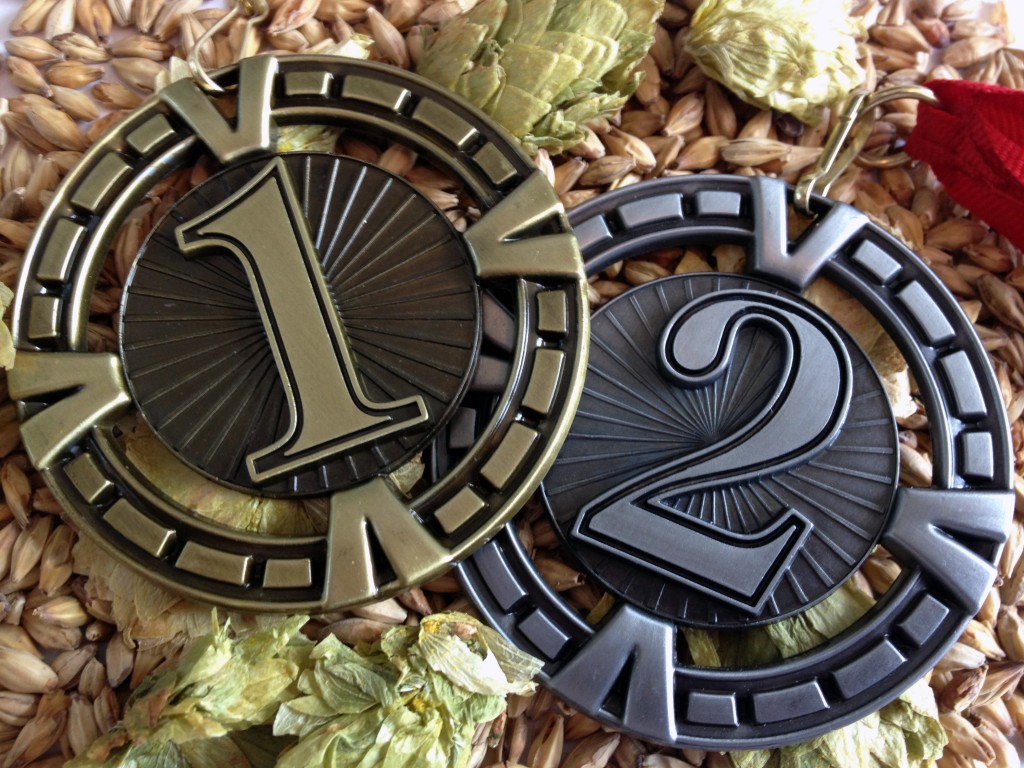 I guess I need to update the sarcastic mini-bio on the front page of this site now. I entered five beers in the VanBrewer Awards this year. I had very little hope for some of them, and slightly higher hopes for a couple. The results were not what I expected.

The beers I entered came down to what I had on hand, plus a few I had saved specifically for entering into this competition:

It wasn’t ready, pure and simple. I was hoping primary fermentation would be done after 9 days when I pulled a few bottles with a thief, but there was still a big krausen layer on top. I bottled one for myself to compare, and sure enough it was a diacetyl bomb. Average score of 23.

The one that won our club competition was re-entered into the larger awards to see what would happen. I sort of wondered if I was being too hard on it, but I really didn’t expect it to place well. And sure enough it didn’t. The judges picked out the DMS as early as the aroma, and the alcohol presence was commented on more than once. I’m still wondering what this beer will turn into, but for now the average score of 27 seems perfectly justified.

I didn’t expect much here. This was my least favourite batch of the versions of this beer I have made so far, and with six months of age on it the hops were likely to be completely dropped out by now. My favourite part of this beer has always been the malt profile, and the judges picked up on that. The lack of hops hurt my score, but I still managed a 39 which was enough for a silver medal in the American Ales category.

I had higher hopes for this one, but realized that after 7 months the lack of hops would probably do me no favours. It scored a respectable 34 average, but that wasn’t enough to place.

And this was the one I had the highest hopes for. It has evolved into a really nice beer, despite the lack of carbonation. I figured the judges would be able to overlook that and rank it on its merits, even though I would certainly lose points for the lack of bubbles. I hoped for maybe a silver medal at best, but realized it would be hit or miss. I sat next to the table judging this category as I judged English pale ale, and felt my heart drop a bit as they eviscerated a flat barleywine. But apparently mine wasn’t the only one, and my hopes jumped back up as they talked about how good another one was, aside from the carbonation issue. And sure enough, this was the one. Average score of 36, which was enough for a gold medal this year.

We’re not done there though. The barleywine went on to the best of show round. I left the room to help sort scoresheets in the back since I assumed it would be knocked out immediately. After an hour or so I went back into the main room to see how much longer things would take, and was a bit surprised to find my bottle in the top six they had narrowed it down to. I still didn’t think much of it, until I came back a while later to see that it had actually made the top three. It was up against an English Brown and the rather fantastic American Pale Ale that swept my amber in category 10. Obviously I wasn’t leaving now.

The final 15 minutes until they had decided on their winner passed awfully slowly. And as they talked I kept hearing barleywine pop up, again and again, more so than the others. And it came down to a unanimous vote where they decided that best of show would go to my beer.

If that’s not crazy enough, the prize is sponsored by Russell Brewing who will have me come in and brew with them some time later this year, and will be released as a commercial product some time next year.

I’m still not quite over how surreal all this is, but it sure is cool. I’ve had my first conversation with Jack and Anders at Russell about how we’re going to do it, I’ll have to start a post logging that process.