I feel like the last few beers I’ve done have been experimental but ultimately disappointing. I’ve certainly learned the limits of my system (no pilsner malt, no lagering, no Belgian beers) but it was time for a course correction for batch 25. A tried and true IPA recipe it is.

It’s been almost a year since I brewed Trois Mers so I took another crack at it. The malt bill this time is a bit more precise, with a single base malt, a lighter caramel malt (though more of it) and biscuit malt to round it out. I’ve dropped the carapils in favour of wheat malt as well.

The hops are the same four I used last time, in different quantities. I’m upping the Columbus and dialling back the Chinook a bit, and I went a bit higher on the late additions. I also decided my usual 4 gallons of finished product isn’t enough, so I planned to dilute with water after the boil by greatly increasing the hop additions. Last time I used 10oz of hops total, this time I’m up to 12oz with more in the boil and slightly less going into the fermentor for dry hopping.

With the extra volume, a blowoff tube seemed pretty necessary. After my my mini Nautical Disaster I decided that I should probably be smart about it. So it went into a bottle of sanitizer instead of stale water this time. You know, the way they tell you to do it. 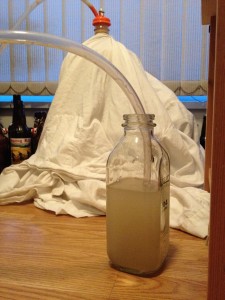 1056 usually works pretty quickly, but after 9 days I still had a big thick krausen layer on top. This was unfortunate as I really wanted to be able to pull some bottles for the annual awards competition. I did anyway, but predictably they had some big problems that stopped them from doing anywhere near respectable. Guess I’ll need to time my brew day better next year for the competition.

One thing I thought I could pay less attention to was fermentation temperature; with the cooler early spring weather I thought an open window would be enough to keep the carboy at a reasonable temperature. It ended up fluctuating more than I’d like, spending a lot of time in the higher than optimal range, so I’m expecting some fusels.

In what I think will be a common occurrence until I start getting a solid handle on common hop varieties, I pulled some more samples and let them sit for a few days, doing a bit of blending to figure out how I’d dry hop in the end. I did this for my recent imperial and ended up going in a different direction than I thought. This time didn’t really hold any surprises; I thought I’d be using Columbus and Centennial, I ended up throwing Chinook into the mix too after tasting the results. Cascade came off as super grassy, so I’m avoiding it. I’m also going to go with a little less time on the dry hops than normal; I’m planning on 4 days max to see how that changes the character. 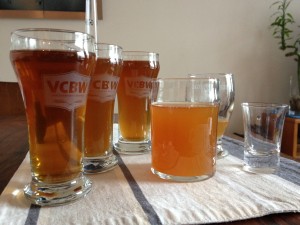 A month and a half after brewing, seems like the final product is shaping up. It’s decent, but I definitely notice the higher fermentation temperature. Hot alcohol detracts from an otherwise tasty IPA. I thought the increased caramel 10 would be a problem, and while I think in the future I’ll back off a bit it doesn’t seem to be nearly as much of an issue as the fermentation temperature.