With a bag of pilsner malt and a homebrewer club competition on the backburner, I decided to go for a Belgian Dark Strong.

The competition rules: make anything, but make it with Wyeast 3522 (Belgian Ardennes) yeast. My initial idea was a Golden Strong spiced with some of the herbs I’d foraged last fall. I’ve been meaning to get around to those every time I see them taking up space in the freezer. But after my lager experience I’m pretty much scared off of Pilsner malt until my system can actually handle it. Especially for a beer that uses pretty much just that, and very little else.

So a Belgian dark strong with some masking fruity flavour and alcohol ended up being my recipe of choice. I grabbed the recipe out of Brewing Classic Styles and went for it.

Something I’ve noticed during my mash is that I tend to go a little lower than the range I’m shooting for, so I purposely doughed in high on this one. Bad move; I spent most of the mash at 156F instead of the 153F I should have rested at. And maybe as a result, this was the first mash where I didn’t actually see full conversion when I was supposed to during my iodine test, so I ended up mashing for an hour and a half to finish converting sugars.

I boiled for a full 2 hours to try and limit DMS. Fermentation was where the real trouble began. After two weeks in the carboy, I took a sample that was stuck at 1.050. While it had fermented out a lot of sugar by this point, that wasn’t nearly enough. The secondary fermenter I was using as the control that seemed to finish, so for the sake of having a few safety bottles for the competition I bottled what was in that and made a starter out of the rest to re-pitch. 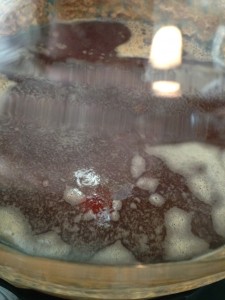 An unsettlingly common sight with this beer. No Krausen, still a long way to go on the final gravity.

After another two weeks that new yeast brought it down to 1.034, but that still wasn’t low enough. I decided to go to secondary (for the first time in a long time) then get the yeast cake left behind active again and re-pitch that. After almost another two weeks it was down to 1.026, which still wasn’t tasting low enough for my liking. I started considering my options.

The yeast cake was basically spent at this point, that much was clear. I didn’t want to rack it again since I’d already done so once. But the yeast was definitely on the old side, with a high gravity beer sitting on top, so something had to change. Long story short I ended up pitching champagne yeast to see if that would knock off a few points, and also to make sure that my bottle conditioning would actually work. After my flat barleywine I was determined to get this one carbonated.

Two days later it was pretty clear the beer was done. The higher mash temp had produced enough unfermentable sugars that, even at 1.026, the champagne yeast wasn’t doing much and this beer wasn’t going lower. And so I bottled.

Given the strength of this one I plan to sit on the bottles for a good long while and see how they turn out over time. Initial results are good, but not quite there; there is some noticeable DMS and the higher gravity finish is still overbearing.

But aside from overall drinkability issues, the first few sips off a bottle are pretty nice, which was enough to win the club competition. The two safety bottles I entered averaged out at about 38 points, which was enough for first place. I was a bit baffled by that, but I had also not tasted the finished, carbonated version of the beer by that point. It’s deceptively nice for a bit, until you try to finish a whole bottle.

I entered two more bottles in the local annual awards competition and had my suspicions confirmed, the DMS does really kill it. It only averaged a 27 there, which is far less surprising.

So I’m not in a hurry to drink this batch. The DMS probably won’t go anywhere, but I’m hoping the flavours will blend a bit and make it a more enjoyable sipping beer. I cracked the first of the many bombers I have left while writing and they seem significantly better; the DMS has a more spicy, less boiled vegetable character. It’s a mellower alcohol burn and a bit drier, though it has a bit of a plasticy phenolic note that wasn’t in the small bottles. I think time will do some good things to this one. I can wait.

3 months after brewing: opened another during a homebrew BBQ in June. While I still can’t say I’m liking it, the blatant DMS is giving way to more of a lighter, acidic tomato juice flavour. Once you get past that there’s probably a decent Belgian strong in there that was fairly well-received. But it’s still a lot to get past. I’ll keep waiting, something good may happen yet.

7 months later I brought a bottle to a VanBrewers meeting and it was well-received, though it was later in the night and no one could quite place what it was other than strong. I’ve had a bottle recently, it’s getting drinkable, but still a ways away from enjoyable. No hurry to figure this out, if it keeps changing I’ll keep waiting.

Just shy of a year later I cracked another bottle to see what time had done. Nothing good. With 7L left and a year of age on it, I decided to give up and have a friend distill it. 4/10, only cause I know there were some redeeming qualities, but not nearly enough to prop up the process issues.