Since I started brewing I’ve always assumed lagers were out of my reach. My temperature control system is primitive at best, and there’s no way I’d be able to sustain 10°C for the amount of time I’d need to do a proper job of it. 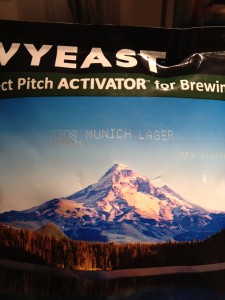 But the past month I realized that the outside weather was pretty close to perfect, and if I were able to open a window, close a door, and let a carboy sit in a cold room for a long stretch of time, I might just be able to pull it off. Combine a crazy idea with a conveniently timed trip, and it was on. The recipe is the Munich Helles lager straight out of Brewing Classic Styles.

I bought the supplies and brewed two days before I left for a trip to Quebec City for a long weekend. The mash went quite well, temperature and efficiency wise, I ended up with a higher OG than expected even after diluting for the first time in, well, ever. I think it has to do with the improvised fly sparging I started doing with 022, it seems to reclaim a whole lot more sugar than the first few times batch sparging. It’s more work, but it feels like it might be a practice worth continuing. At any rate, I felt like my gravity shot high enough over my target that I was okay diluting with 3L of water; it’ll affect my carefully calculated bitterness a small amount, but it should still be within range.

Due to the DMS I picked up on a single bottle of #020, I decided to play it extra safe this time since I’m using pilsner malt. I split the batch between two pots, then upped my hops to account for a more sugary wort and only added them to the larger pot. I also boiled for about 110 minutes, a 90 minute boil with an extra buffer since I knew I’d have to put the lid back on for a few minutes here and there to get the wort back up to a strong rolling boil. 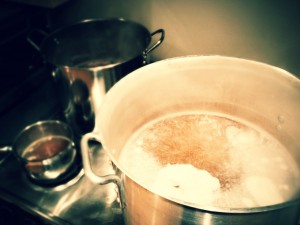 So fermentation. This is where the “Laissez-faire” part of the name comes in. I knew going in I would have minimal control, this was only going to be as good as the weather permitted, so once I stuck the carboy in my usual water bath and dunked in a couple of ice packs, I opened the window and walked away for about 5 days. It started at 10°C and rose to 15°C by the time I flew back into town, and I have no idea how much of the intervening time it spent at which temperature. I do know this: this is a lager that will not require a diacetyl rest, since by now it’s spent more than the usual amount of time at a normal rest temperature. Early tastes have told me that I’m exactly right on that assumption. 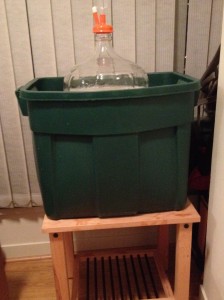 After a week and a half I pulled a sample from the sidecar fermentor — it’s down to 1.012 but it looks like the yeast is still active so it should drop further. Good thing, it’s tasting a bit sweet at this point. No diacetyl, and I think it’s just sweet and not fruity, so my fermentation may just have worked out. I’ll be racking to secondary in a few more days once it seems completely done so I should know more then. There’s a small amount of DMS present, but so little that I feel my revised boil method worked quite well, and I don’t think it’ll detract from this batch.

After three weeks, I revised my idea of how to finish this one. Instead of going to secondary, I let it sit on the yeast for another week, and went directly to bottle. I’ll be allowing the bottles to lager for the next month or so, but on bottling it was tasting quite decent despite the DMS I noticed previously. I’m hoping after lagering and carbonation this one will clean up well. The FG was also suggesting it was closer to the 6%+ range thanks to my higher than normal efficiency, so I diluted again on bottling. The specific math I used has been lost in the intervening time, but I remember aiming for 5%.

All over the place. Thanks to all the dilution, I ended up with a larger batch than normal. Since I planned to lager the bottles, I crammed as many as I could into the fridge and left them for a month. Those ones turned out alright; not a great lager by any means, certainly flawed with a fruity profile and a higher sulfur content than you’d want, but reasonably drinkable despite it all. The ones I left out though, those ones didn’t go so well. Overall this batch doesn’t get much higher than a 4 out of 10, which tells me lagers are certainly out of my reach until my setup changes significantly.