A few of the local club members and I got to talking about the impact of mineral additions on final product. Inevitably, we all decided a few experimental brews were in order.

To prepare I went back and listened to the five water episodes of Brew Strong and got a refresher on mineral additions. The conclusions I came away with: Vancouver’s unbelievably soft tap water (almost distilled water levels of minerals) doesn’t need a pH adjustment during the mash, so there’s no point in adding alkalinity unless doing extremely light beers like lagers.

But we do need to add minerals for flavour and fermentation. My previous assumption was that the mash was the right place to do this, but since pH isn’t an issue there’s no real difference between mash or boil additions; in fact, if I decide to use something that adds any amount of bicarbonate, I’m better off adding post-mash anyway. Convenient, since I wanted to mash once and boil twice to produce two different fermentations on this batch. Here in Vancouver we need to add at least 50ppm calcium for fermentation, as well as chlorides and sulphates to flavour the final product. Chlorides enhance malt, sulphates enhance hops. John Palmer’s experiments led him to conclude that 2:1 chloride to sulphate is as high as you’d want to go with the chlorides, but you could go as high as 8:1 sulphates to chlorides if you want. 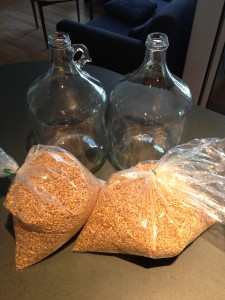 That in mind, I decided a pale ale would probably be a good way of bringing out whatever flavours the mineral additions were adding without being drowned out by other ingredients. I would mash for 4 gallons of wort, and split that between two boils. One would get a mineral dose, the other wouldn’t. I used the American pale ale recipe from Brewing Classic Styles as my base.

The mash went well enough, though 6lbs of grain wasn’t enough to properly filter on recirculation so I ended up with cloudy, slightly chunky wort from all the grain that slipped through. I improvised a fly sparge with a colander and a 500mL pyrex cup, pouring a new batch of sparge water on whenever the grains on top started peeking through the water line. It worked better than expected and netted me an 89% efficiency; I’m not sure if I’ll do it on every batch from now on since it’s a lot of work, maybe only my higher gravity beers. 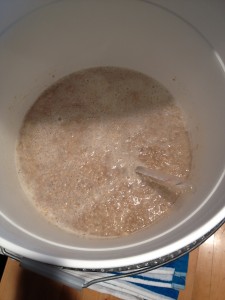 The theory was that each boil would be identical, but in reality I hadn’t used my smaller boil pot in a long while so I had to re-acquaint myself with its quirks on the first batch. I ended up with slightly different OGs between batches, 1.047 and 1.050, but I don’t feel like that was enough to throw the entire experiment off the rails. The one place where I screwed up was the mineral additions themselves; I planned my calcium/chloride/suplhate ppm in my brewing software (BeerAlchemy) which gives mineral additions in grams per pint, a weird measurement. I’ve become accustomed to multiplying by 40 for a full 5 gallon batch and apparently I went on autopilot when weighing out my additions. So instead of my intended ppm in the salted batch, I ended up with just over 3x the concentration I intended. (The boils didn’t lose as much volume as I expected, so instead of 1 gallon at the end, I ended up with about 1.5 gallons of each batch.) 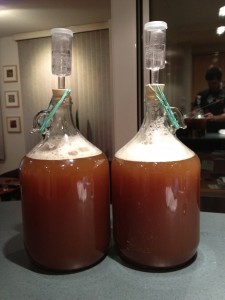 Fermentation was interesting. I expected the salted batch would lag, but it took off like a rocket and went much more vigorously than the salted batch. Both finished out around the same gravity proportional to the starting gravity, which I would have expected since they sat side by side at the same temperature the entire time. 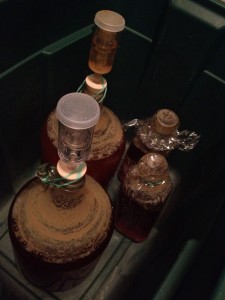 Instead of bottling each individually, I realized the oversalted batch would have to be diluted. But this gave me a pretty good opportunity to blend different proportions of each batch when bottling. Since the salts were added during boil, my assumption is that (aside from calcium) the impact on mash and fermentation would be negligible, so blending can give me a reasonable idea of how a pure mineral addition at each blend proportion would have turned out on its own.

Up front, I determined that a ratio of 2:1 unsalted batch to salted batch felt like the right balance for most of the bottles, so that’s how I blended the bulk. But up front I made sure to set aside four bottles at blended ratios of 0:3, 1:3, 2:3, and 3:3. These are the ones I’ll take to the club meeting and compare against.

Bottling was a bit of a nightmare. Small volumes and 1 gallon jugs just don’t work with the auto-siphon, so I had to manually suck-start to transfer each. Hello oxidation. I’m hoping enough time in the bottles will clean that up.

The Recipe (for two batches)

The salted batch was obviously overdone. The recipe and the process seemed to turn out well, but were ruined by my mistake. Further reinforcing this, the unsalted batch was actually quite good. I think a 2:1 ratio was probably far too high, I should have gone with 4:1. We’ll chalk this up to learning experience. 4/10 for the resulting beer.

Update: at just shy of three months, one of the last bottles is drinking really, really well. No oxidation, the chloride sharpness was much diminished, and this turned out a tasty, tasty pale ale. Centennial dominates, giving way to a solid dry malt backbone. Actually a really good pale ale in the end. Upping to 7/10.