Last year I accidentally brewed an Imperial IPA during the lull between Christmas and New Year’s, and this year it felt like a good idea to try again on purpose. 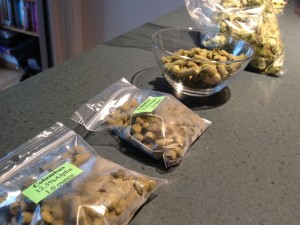 I’ve also been meaning to play with Simcoe and Amarillo, two seemingly hard to find hop varieties this year. I got my hands on both, and ended up with Columbus for bittering instead of Warrior as I’d planned. I was hoping to use a completely different set of hops than any previous batch I’d made, but it turns out Dan’s doesn’t stock Warrior. Ah well. 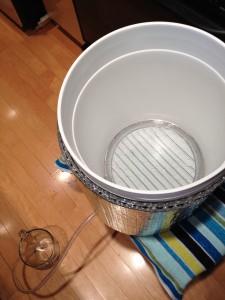 Prior to this batch I replaced a few pieces of equipment and bought a new mash tun while I was at it. No more brew in a bag for me, I’m finally mashing the same way most home brewers do. The mash went well, I managed to keep within 1 degree of my target temperature throughout. It’ll take a batch or two to get the hang of lautering; I didn’t raise my temperature to 170F before starting the runoff, so I likely killed some efficiency as a result. I also ended up with some chunks and a bit of flour in the brew kettle, but not nearly as much as I used to get from the bag. I’m back down to 63% efficiency on this batch, which is where I was at the previous few batches before buying my new grain mill. Since the last batch was 75%, something didn’t quite go quite right. I had planned to add some dextrose to thin this one out anyway, so I bumped up the amount I added by an extra half, but still came up short in my numbers.

I had to kill my first attempt at getting to a boil due to too narrow a window before a scheduled appointment, so I figured aborting and re-starting an hour later was probably preferable to having to head out the door 50 minutes into the boil. I doubt that’ll affect the final beer much, maybe just a bit more melanoidin toasted flavour if anything. 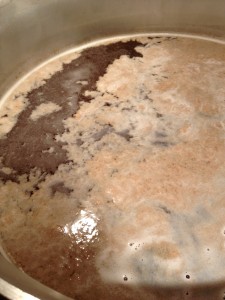 Usually I end up with a ton of flour in my boil from the bag, so I’ve never really seen break material. That all changed this batch, for the first time I could actually watch it forming; in the past my wort has just been too cloudy to see anything. This batch was far clearer and instead of a flat three inch layer of trub and flour after siphoning, I also ended up with the usual expected cone of sticky hops & break material from whirlpooling. This all feels like a breakthrough; things people tell me are supposed to happen are finally happening.

The hop schedule was a bit ambitious. An initial 60 minute Columbus charge followed by 18 subsequent additions of Columbus, Simcoe and Amarillo over the course of an hour, one every three minutes. So basically continuous hopping throughout the batch. It worked well for my fresh hop IPA, so I thought I’d do it again for the whole boil. We’ll see what the results are, but that felt like a step too far; standing by the kettle for an hour and measuring out hops stopped being fun fairly quickly. I didn’t get my proportions right and ran out of Columbus with 20 minutes to go, so who knows what’ll happen. IBUs through the roof no doubt, probably in the 150-200 theoretical range, with hopefully a ton of aroma in there too. 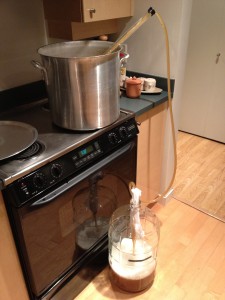 Something else I’m hoping my new mash tun will fix is beer colour. My lower SRM batches take on a noticeably dingy colour after a month or so. At first I suspected the 2-row grain we get locally, but after posting on a few forums the verdict seems to be dull colour is a side effect of hot side aeration. I haven’t looked into HSA much since brew in a bag pretty much makes it a given, and an uncontrollable part of the process. Now that I can limit that, I’m hoping for a bright orange colour to this batch. The initial results in the carboy look a far sight better than previous brews, so I’m hoping that’s now a solved problem. It’s a beautiful bright orange, and much much clearer than my normal brews.

The name? It’s a direct rip-off of a dish at one of my favourite local izakayas. The planned alcohol and IBUs of this beer (if not the actual result, thanks to the lowered efficiency) was way over the top, so a name to match seemed in order. 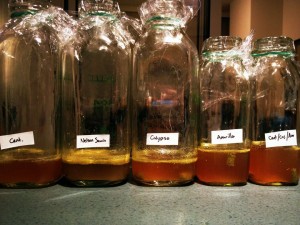 After a week in the fermentor I pulled a sample to check how it was doing. It tasted a bit tamer and more subdued than I was expecting, so it seemed like a good dry hop bill would be key. I pulled about a liter and split it up between five glass bottles, and dosed each with a gram of hop pellets. My math said that 150mL of beer and 0.5g of hops would be more or less equivalent to 2oz in a 5 gallon batch, so it seemed about right. Unfortunately upon adding I went with a full gram, and I have a sneaking suspicion that you can’t easily scale down dry hopping to that level anyway, so after just two days each sample was overpowering. I pulled another half liter and cut each in half with fresh beer, and that helped substantially. 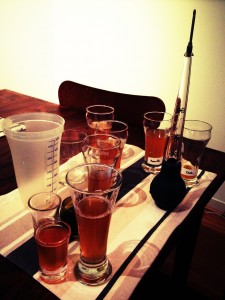 So I spent about a half hour mixing and matching and comparing notes. The five bottles were hopped with Amarillo, Centennial, Nelson Sauvin, Calypso, and a mix of Amarillo/Centennial/Cascade. In hindsight I wish I had just used a single hop for the latter and done all my blending after the fact. I tossed Nelson and Calypso in there as wildcards since I just happened to have some on hand. My tasting notes went something like this:

Nelson Sauvin
tea-like, apple, a bit tropical, a bit grassy.
Calpyso
more of a minty fresh lemon nose. Very grassy taste; diluted again, still grassy. Not digging it.
Amarillo
sweeter tropical candy. A little grassy. Seems okay, but not on its own.
Centennial
the usual fruity hop candy, knew I’d be biased toward this one going in. Slight spice & anise notes, really complements the base well.
Cascade/Centennial/Amarillo
not much nose. Grassy, anise. Seems to be muddying up the base beer.

I tried a few blends with the Amarillo, Nelson and Centennial and ended up determining my dry hop bill would be 2oz Centennial and 1oz Nelson Sauvin, it offered the best complement to the base beer and a complexity I think I’m really going to enjoy.

The first week in the bottle saw very little carbonation build-up, so I moved the batch to a warmer spot and it managed to carbonate quite a bit more over the second week. Tasting at around the 5th week after brewing yielded huge hop flavours, though it was still quite yeasty. I haven’t quite ruled out 1056 as a brewing yeast yet, but the more I do with it the less I’m convinced it’s a yeast I want to keep using. I’m considering an IPA with 1318 instead next time round to see what the fruiter esters contribute.

Unfortunately I’m now picking up some solventy notes. Not from the alcohol thankfully, my temperature control is still working fine. I’ve heard Centennial dry-hopping can produce nail polish notes, but I’d never experienced that. I’ve also heard plastic can introduce that, and I’m a bit suspicious about the hose coming off the new mash tun. It’s turned a slightly cloudy colour from a couple of run-offs, which makes me wonder if it’s actually food grade or not. Either way I think the solventy notes will diminish in time, but time will also take some of the hop flavour away. A bit of a double-edged sword.

A solid 9/10. Best thing I’ve brewed so far. The dry-hopping trial runs were a good call, and none of the concerns above turned into a problem with drinkability.