I finally decided to get a barley mill, and figured the inaugural brew ought to be something I’m already familiar with. Since I’ve been itching to give the hop bill on my amber recipe a revision, it seemed like a good choice. 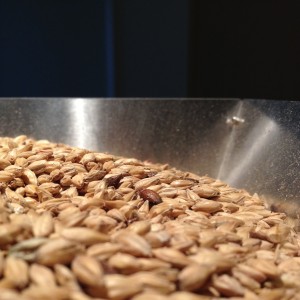 I bought the standard homebrewer Barley Crusher. Setting it up was easy enough, and I lucked out when I discovered the mill’s base fits nicely over my smaller brew pot to catch what I crush. The only snag I ran into was trying to use my electric drill to power the crusher, that didn’t work so well. Looks like I’ll be hand-cranking it. 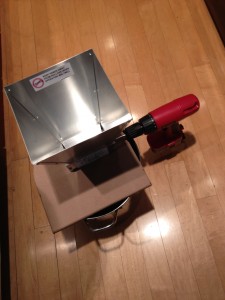 The initial crush seemed much more consistent than what I usually get from the home brew shop, and my mash proved it. My efficiency was upwards of 75%, when I’ve seen at least 10% less than that fairly consistently lately. And after the volume mishap of #019 I purposely used about 6 or 7 liters more water than normal, so the efficiency gain is likely even higher.

The one downside is that I ended up with a lot more flour in my mash, and the bag I brew in doesn’t filter it out very well. I managed to skim some off during the boil, but it looks like this batch will be a lot muddier in colour, and probably cloudy as well.

I bounced around a bit during the mash, I started high at 160 and kept it above 158 until 30 minutes, then I quickly dropped to 154 and finished out around 153. My target was 157, so the split between the two temperature ranges should produce about what I was hoping for. 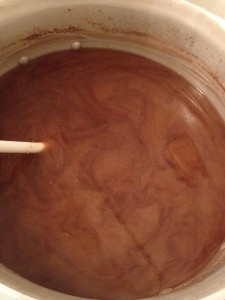 Unlike my attempt during #019, the small jar of leftover wort I’m open-fermenting actually started bubbling this time. I wasn’t expecting it to be any good, and it wasn’t. 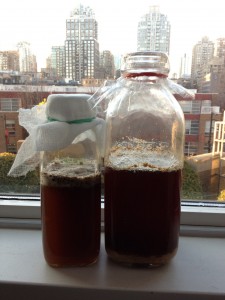 Above you’ll see my wild yeast batch fermenting away on the left, and the control bottle with 1318 on the right. The difference in aroma and flavour couldn’t have been more stark. The control bottle smelled bready and ale-like, and tasted on the sweet side with a very nice honey-covered biscuit sort of thing going on. It’s going to be a really good batch of beer. The wild bottle smelled like nothing more than lychee, but tasted like burnt rubber and shoe leather. I was pretty careful with my sanitation, so that taste is from whatever’s in the air.

I have a feeling if I could isolate the strain producing that lychee smell and grow it up, I might actually have a decent batch of yeast on hand. But that would involve a microscope and a bit of chemistry.

It’s been a useful experiment either way, I can now pinpoint a specific off-flavour I’ve tasted in some local homebrewer’s beers and say with some degree of confidence that they’re probably allowing wild yeast to get in somehow.

On bottling day I noticed a distinct smoke flavour to the malt. Either the chocolate malt I bought was darker than normal, or there was some smoked malt mixed in somehow, but either way it’s not quite the same malt bill I normally use. Once the hops mellow a bit I think this beer is on track, but I’m a bit leery about that smokiness. 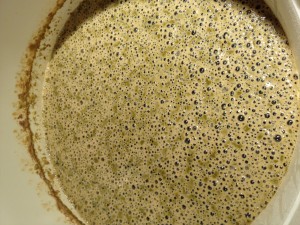 Also noticed while bottling: a layer of yeast and hops still floating on the top. I always wait until the yeast drops these days, but I rushed this batch by bottling after only two weeks since I’m hoping to have it mostly ready to drink around Christmas. That yeast tells me to expect a bit of diacetyl, but it’s an amber so diacetyl could theoretically be considered style-appropriate if I just call it an Irish Red.

After three weeks in the bottle the diacetyl doesn’t seem to be a problem though. The perceived smokiness from earlier on also appears to have died down. The new hop bill isn’t really doing much for me, it’s certainly different from the all-Cascade batch I did in July, but I wouldn’t call it an improvement. Less citrus and much spicier, but still not a great complement to the malts in this recipe. I’ll have to keep thinking about this one and try something else next time. It’ll probably be a good long while before the next re-brew though.

After two months the batch is mostly gone, so I guess I have to call it: the revised hop bill was a failure. I preferred the way the previous Cascade-only batch mellowed out over time. I’m not convinced the dry hops weren’t entirely to blame; I had intended to go Fuggles, but they weren’t available when I went in to buy, so I used Goldings instead. I think that was a mistake.

I’m also picking up some DMS, which is probably a result of finally pinning down exactly what DMS tastes like. I’m not sure at this point if previous batches of my beers have suffered from it, aside from the former-mystery vegetal character identified by the judges of #009. But it’s clear my semi-closed lid boil kettle (forced by my low-BTU electric stove) is certainly to blame, and something I’ll need to figure out for future batches.

It’s not a bad beer, the malt still works, but there’s just something not right about the hops that I need to fix if/when I brew this recipe again. I suspect easing up on the finishing hops and scaling way back on the dry hop volume and changing the variety will get me a lot closer. How I’ll achieve that, I can’t say yet.