After some travel and general busy-ness, I ended up going two months between brews this time. I had planned to brew a saison on harvested Fantome yeast, but while I had some luck growing it up from the bottle, I didn’t feel confident about using it. I’ll try again in December most likely.

In the meantime, I wanted to just get something in the carboy, so on a whim I decided to brew the Janet’s Brown Ale recipe from Brewing Classic Styles. After listening to countless hours of Brewing Network podcasts this one has attained a bit of a legendary status and it’s been on my list for a while, so now seemed like as good a time as any.

This was my first time hopping during the mash (you can’t see the grain I’m dropping the hops into above, but it’s there). I’ve read up a bit on first wort hopping, I guess it may be similar, but BCS didn’t really provide any why, just told me to do it. And so I did. I’m not really sure I believe that first wort hopping does what they say it does, but I haven’t actually tried it so who am I to judge? 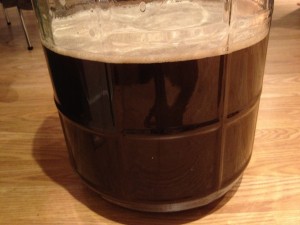 Brew day went well enough, but I guess the larger grain bill (16lbs) absorbed a lot more water than usual, because I ended up yielding almost a gallon less than I normally do. That’s about half of a 6.5 gallon carboy shown above. But the hop bitterness and OG ended up higher than expected anyway, so I felt safe diluting with 2L of boiled water during fermentation and may add another liter or two before it’s finished. It’ll screw up my ABV calculation, but that’s hardly a show-stopper. 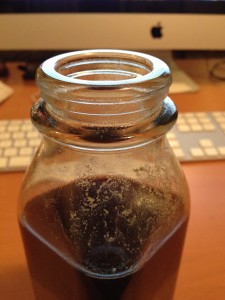 I stuck some of the wort reclaimed from the trub in a small milk bottle and left it open to try and pick up some wild yeast. After five days there’s a film growing on top that’s not at all healthy-looking, with no typical signs of fermentation. No big loss, I’ll probably try again next time, and maybe actually drop some cheesecloth on top or something. (I figured if open fermentation is good enough for the Belgians, I ought to be fine — but that’s probably where it went wrong.)

Having a taste while bottling, my take is that this is far more of a Cascadian Dark Ale than it is a brown ale. The roasted malts are definitely in there, it’s almost like someone took an IPA and a porter and dumped them in with each other.

After a week and change of conditioning, I’m starting to get into this one a lot more. I had my doubts early on, it felt like just another CDA. But I expect this one to get dangerously drinkable as the hops mellow out.

Not quite six weeks after brewing, a few were shared as Christmas cheer with a wide mix of people. It was a fairly universal hit. I’m digging it, other beer drinkers are digging it, this recipe is gold.

8/10. Way better than I hoped. The batch is going like water, it’ll be hard to save a few bottles for the annual competition. I put it in front of a few people who have had/made Janet’s Brown before and the consensus was that my batch was not quite as hoppy as it’s supposed to be, but more balanced and drinkable.