Since it’s been almost six months since the last time I attempted a cider, I thought I’d try again. It’s the right time of year to experiment with apples after all.

My previous attempts have been aimed at replicating some of the barrel-aged ciders my wife is fond of, but it feels like I need to first get my base cider tasting better. So I’m not doing anything special, it’s just apple juice and sugar.

Of course, since I just happened to have a batch of homemade Belgian candi syrup lying around after a talk I did for the local club, I used that instead of plain white sugar. A half and half mix of the syrup and brown sugar smelled pretty amazing, it may just end up adding a slight hint of caramel to the finished cider.

Brew day was straightforward. Open the gallon jug, pour in yeast and sugar, throw in an airlock. I’ll ferment cold for the first few days, 16C if I can manage it, then bring it up to room temperature for conditioning.

During transfer to secondary I noticed it was tasting pretty darn sulfuric, but after another month that went away. I guess that’s a mini introduction to the “rhino fart” problem common to fruit fermentation. 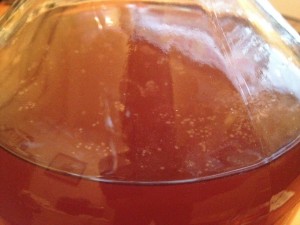 Well over a month into conditioning, I noticed some white specks floating on top. I’m pretty confident my sanitation was okay, and I don’t have any other theories. I’m not that worried about it either way, and when I bottled I stopped transferring before they got sucked into the hose. I don’t anticipate any problems.

Three months after brewing I cracked the first bottle, the last of the batch that didn’t quite fill. The carbonation didn’t build up properly, which was expected, but it actually tasted quite good. Dry with just enough sweetness to balance, and much more refined than previous batches. I’m expecting good things next year.

I left a few bottles for over a year, probably about half a batch. Cracked the first on Halloween 2012, and it’s hard to say if it’s the age or the fact I didn’t screw with it, but this is the best cider I’ve made by a long shot. Very low on the rubbery phenols I’ve noticed in previous batches, and just a touch alcoholic but well within reason for a bigger cider. Equal to many of the better commercial ciders I’ve had, and better than a lot. 7/10