It’s hop harvest season again, and this year I had the opportunity to pick about 2lbs of fresh hops from a few different places.

The first batch was from a bunch of anonymous bines (my money is on Cascade) behind a clothing store in town. Someone at the local homebrew club mentioned these on the forum a few weekends back, and though I was the third one to show up and pick them I still managed to bag about a half pound. 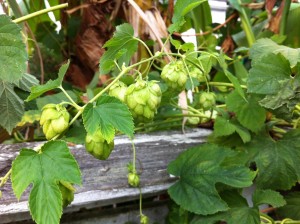 Knowing I wouldn’t be able to brew that day I chose to dry them out, since fresh hops go south pretty fast. After a couple of days they had lost most of their water content and were thin and papery, but took on quite an unpleasant grassy chlorophyll smell and stopped having anything approaching a hop aroma. From what I’ve read this is fairly common, and it should go away over time; a few weeks later it seems to be diminishing, I’m not sure when I can expect them to smell like hops again. 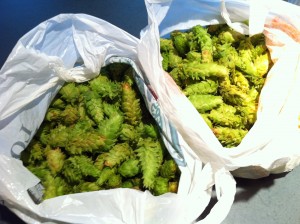 The other batch was growing up the front of a friend’s house, he had plenty of Cascade and Chinook this year. The Cascades weren’t quite ready so I bagged a pound and a half of Chinook. After my experience drying the previous batch of hops, I was a lot more interested in using those ones wet so I stopped and got some grain on my way home and brewed an impromptu wet hop IPA that evening.

After reading up on wet hop beers I discovered you need to use a lot more than the equivalent dried hops to make up for the increased water content, something around 1:5 is the commonly accepted ratio.

The mash and boil went as well as ever, I even stayed right on my target mash temperature of 152F for most of the mash, which is probably the first time that’s happened. I decided to use a hop bag in order to have some way of getting the hops out before transferring; 21oz of Chinook is a lot of extra floating mass that would have made siphoning to my fermentor a real challenge. 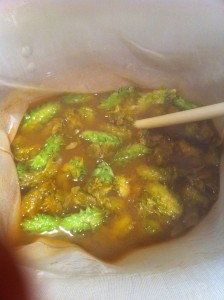 Since I have no way of knowing the acidity of the fresh hops I bittered with Columbus pellets, and used the Chinook for aroma. I delayed a lot of my additions a bit more than usual, bittering at 0:45 from the end instead of the usual 0:60, and not adding any Chinook at all till 15 minutes from the end. I continually hopped for the last 15 minutes, adding a small handful every 20 seconds or so, and used the entire 21oz lot. It was a bit laborious, but will hopefully pay off with an interesting bitter and aroma dynamic. My software gave me a 55IBU estimate for the recipe, but the continual late hops really throw off the math; I wouldn’t be surprised if I’m in the 60-70 range.

After the boil and removing the hops, I noticed there was a bunch of lupulin floating in the wort; I’m not really sure what that’ll mean for the beer’s stability or head formation, it’s the first time I’ve seen a yellow layer of specks left behind like that.

Early results from the fermentation seem positive; I used my typical satellite fermentor to try and get an early preview, but something went horribly wrong there and I’m getting a harsh burnt rubber taste. Luckily the primary is unaffected. I was hoping to split the secondary into a few parts and dry hop separately to figure out what I’m going to do to finish this one after it’s fully fermented, but it tasted so awful it wasn’t worth it. I did drop some Cascades in and that seems to have worked, so I think I will dry hop with an ounce or so of Cascade pellets to add a bit more complexity.

In the end I dropped in an ounce each of Centennial and Cascade; I think it was the right call, it added the complexity I was missing from the early sampling.

It’s only one month out, so weighing in with a final result seems premature. The bottles have carbonated quite nicely after not even two weeks, so it’s drinkin’ time. I sort of figured the lupulin would cause some haze in the final beer, and sure enough it’s the murkiest beer I’ve made in a long time.

But wow, is this one ever a winner. I think the Centennial dry hop addition really helped, the sweeter almost candy-like profile I get off that one made for a beautiful blend with the Chinooks. I need to try it side by side with the local wet-hopped IPA darling to see if it really holds up as well as I think it does, but without the benefit of the direct comparison I’m giving this one an easy 9/10.

2 months later: it’s mostly gone, but some bottles are starting to go a bit skunky. But wet hops will do that, even my bottles of Driftwood’s Sartori ended up skunky after a month or so. What’s interesting is that I’m picking up two distinct flavours from this batch; one is dank and skunky, the other has a lighter candy sugar sweetness to it; the latter bottles are amazing but they seem to be a bit more rare.

3 months later: one was opened on Christmas Eve, and the skunkiness had mellowed out leaving the refined anise taste I usually get from slightly older imperial IPAs. It was quite impressive how well it held up.

9 months later: the last bottle was opened during a home brew BBQ in June. Based on my experience with commercially-produced fresh hops IPAs, I had expected the hops would have long fallen out. Not so; while it certainly didn’t taste fresh, it had held up respectably well. I almost wish I had saved a few more bottles. An unexpected surprise.