Late summer means the surprisingly large numbers of wild (non-indigenous) blackberry bushes are laden with fruit. In past years I’ve gone out to pick them for the sake of making pie, but this year I had a different idea in mind. A BC brewery makes an annual blackberry porter that I find only okay at best, so I’d like to use the same basic idea and produce something a little more to my tastes. (Besides, I’m a long way off from attempting a lambic.) 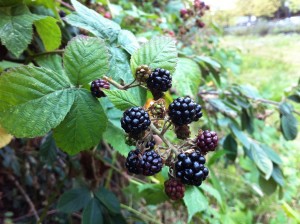 If I’m drinking a fruit beer I’d prefer to look for the fruit rather than have it dominate. I don’t have a huge sweet tooth, especially not when it comes to beer. So this one should be porter foremost, with a little something in the background if you look for it; the fruit is an ingredient and not the focus.

I had a lot of questions about the blackberries. How much to add? How to add them? During the boil or fermentation? Afterwards? What about preparing them, should I throw them in whole or puree first? And then there’s sanitation.

After spending a bunch of time looking into fruit beers I found some answers. Fruit in the boil releases pectin, so that’s out. Adding them during primary fermentation would blow off a lot of fruit aroma and produce a more wine-like character, whereas adding during secondary tends to produce more of a fresh fruit flavour. I’m still not sure whether I’m adding them whole or mashed, but it sounds like after freezing them first they should break apart pretty well in the fermentor. And I think freezing for a week or so during primary fermentation (plus dumping them into a fully-fermented 7% beer) takes care of my sanitation issue pretty well too, I doubt I’ll do anything else.

Another issue I have spent time looking into lately is black malt astringency. I’m finally realizing I don’t really like CDAs / black IPAs; what bothers me about them is the burnt astringency I seem to get from every single one I’ve had. I don’t mind it so much in porters, though I am starting to notice it happens in them as well, and I definitely prefer porters on the smoother side. The consensus seems to be that avoiding it requires a similar approach to how I cold-pressed the coffee in #011 to avoid bitterness — cold-pressing black malt ought to mellow out the burnt and astringent notes quite a bit. So I kept the black malt separate from the rest and steeped it in the fridge for a few days ahead of time. In hindsight I probably should have only gone for a single day; the wort turned out noticeably more bitter and dry than normal. (I’m also not totally convinced I was sold an even half pound, it seems like it could have been more.) 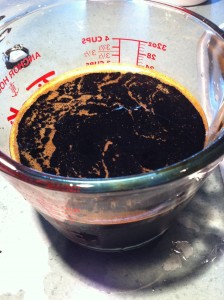 My mash temperature swings appear to finally be under control. I think in the past I’ve spent too much time focusing on the first five minutes, which leaves the rest of the hour swinging all over the place. This time ’round I let physics do its thing and just doughed in at my planned strike temp and left it. I ended up mashing at 156 for most of the hour instead of 154, but that’s totally acceptable for this beer. In the future I’ll try and narrow down even further the difference between strike temp and final temp on my system and try to get closer to my targets. 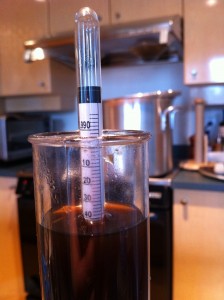 Otherwise everything more or less went perfectly. After all the planning I was still a bit leery about the black malt issue, but after a day or so of fermenting out I tried a sample from the smaller satellite fermentor and it appeared to be a non-issue. I did have a bit of a brain fart with the Goldings alpha acid conversion and went 10 IBU more bitter than I was aiming, but I don’t think a low-30’s IBU porter will be too bad. 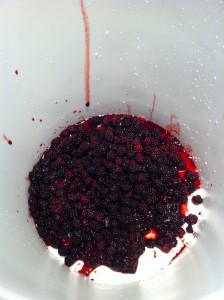 After a week of fermentation I transferred the beer to a secondary fermentor, first time I’ve done that in ages. After my earlier debate whether to leave them whole or puree them, in the end I decided I’d take a masher to the blackberries to break out some of the juice. 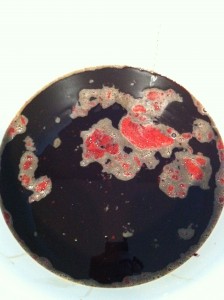 The resulting post-transfer black liquid + red foam ended up looking particularly gory. I suspect the final beer might take on a bit of a red/purple tinge, especially the head.

Two days after transfer the blackberry character was already noticeable, so I figured I’d be better off packaging earlier than later to minimize the fruitiness. After 8 days on the fruit I bottled. I noticed the tiniest of growths in one corner of the floating blackberry pellicle, I suspect it was a bit of mold (though it certainly didn’t look like it), so taste aside it seems like any longer with the fruit would have started to be a problem.

At this point the beer has a very slight tartness that quickly mellowed to a smooth chocolate sweetness, and an assertive alcohol presence. Hopefully with carbonation and chilling the latter will diminish, but even if it doesn’t this still promises to be a really nice beer. Cold steeping the black malt was a good call, any worries I may have had about wort astringency were not an issue in the fermented beer. It’s mild and free of any harsh astringency.

I’m a little surprised that the FG dropped lower after a week on the blackberries; it was hovering at 1.020 when I racked and finished out at 1.017. I expected a bit of an alcohol boost as the sugar in the berries fermented out, but I didn’t think it’d be apparent in the gravity reading; maybe after a week in primary it still just wasn’t finished? First time using British Ale II (1335) so perhaps it just needed a bit longer.

After a week of conditioning I opened the first bottle; it’s strikingly obvious that one thing I forgot to consider was the extra fermentation of the berry sugars. I should have controlled the temperature during the week or so on the berries, but instead I let it sit at room temperature and ferment hot. And I sure can taste it in the fusels. The pre-berry porter was fantastically smooth and you wouldn’t have guessed it was 7%; now there’s no avoiding it. Maybe time will clean that up a bit, but it’s a lesson well learned if and when I ever try another fruit beer.

After another week of conditioning the fusels are tamed and have moved to the background a bit, so that’s a relief. Now I’m getting a few floating chunks of who knows what at the top of every bottle; it’s tasting just fine, but I’m not quite sure what to make of the floaters. I’ve since read that freezing isn’t enough to properly sanitize fruit, so perhaps that’s a bacterial byproduct. Doesn’t seem to be affecting the flavour much, so nothing to worry about yet.

The base porter seemed like it was on track to be spectacular, but adding the blackberries didn’t really do me a lot of favours. Interesting experiment, still a highly drinkable beer, but the next time I brew a porter it’s going to be a straight up version of the recipe because I’m convinced that I can do a whole lot better. 6/10

(And the reddy-purplish head I was expecting on this beer never showed up, it ended up just your standard porter brown.)