It’s late summer, which means if I want to have a barleywine ready for the winter it’s already on the late side to brew it. As mentioned in #014, the plan was to repitch on top of that beer’s yeast cake.

The recipe I chose was the Thomas Hardy Ale clone out of Brewing Classic Styles, and since my system doesn’t have the capacity to handle 25lbs of grain I decided to supplement with some liquid extract. It feels like ages since I’ve worked with LME, though I guess it has only been six months. 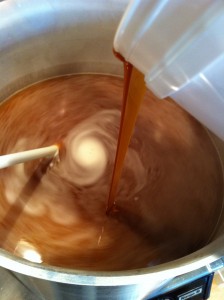 Brew day went fine. I’ve noticed I tend to heat the mash water a bit high, then spend a few minutes bringing the temperature down to strike temps, but when I do that I lose more heat than if I just dump in the grains at the ideal strike temp as it’s heating up. I need to attempt the latter more, but that’s easier said than done. Watched pots and boils and all that.

All worked out in the end, I hit close to my numbers. I chose to dump in the extract then boil for 2 hours to promote melanoidin production, offsetting my hop additions to the last hour. I managed to pull a bit less than a liter of leftover wort for my sidecar fermentor, but I had to take a lot more trub than normal.

The problems began during fermentation. After my experience with #001, I decided to go directly to a blowoff hose instead of using an airlock. In hindsight this probably wasn’t necessary since a) I have decent temperature control, and b) I had at least 2 gallons of headspace and the yeast only krausened up a gallon or so.

When I woke up the next morning, I saw that the hose was full of water that had obviously been sucked up due to the difference in temperature between the carboy and the water bath I regulate temperature with. Not clean water mind you; I figured that the krausen was only going to blow one way, out, so why waste sanitizer in my water bucket? So what was getting sucked up (and who knows how much actually dropped into the carboy) was stale 3 week old bacteria-laced water from my temperature control bucket. I didn’t bother swapping out between the last batch and this one, cause it’d never touch the beer of course.

Compounding matters, when I went to remove the blowoff I carefully pulled the loose end out from the water bath, but it didn’t drain. Siphons being what they are, both ends needed to be loose for that water to dump out the way I expected, but the other end was in the carboy. No problem, let’s just pull out the airlock and… the water went exactly where I didn’t want it to go: into the carboy. Not all of it, but enough that if by some miracle the water sucked up by the hose overnight never actually made it into the carboy, well, that was now fixed.

Keep in mind all this was only about 8 hours after pitching, so the yeast hadn’t really gotten started yet. So there really wasn’t anything to do at this point but wait.

This is where the sidecar fermentor thing I’ve been doing for the last three batches really comes in handy. I have an uncontaminated secondary fermentor that can act as a control, so I’m able to have a sense of what the beer is supposed to taste like beforehand or, as in this case, without contamination.

At four days I took a side by side sample of each and compared. Aside from the main carboy still being higher gravity, the two were virtually identical. It would seem the yeast cake I pitched on was up to the task, and managed to stay ahead of any bacteria that could have spoiled the batch.

After a week the gravity had only dropped to 1.035 and activity was slowing down. Then I spent two weeks away in the UK, and during that time it dropped to 1.030 which was good enough to bottle since I hoped conditioning would dry it out further.

I’m still a little leery, since this stuff ideally needs to condition for so long. It’s possible we’ll see some off flavours develop into big problems down the road. But I’m optimistic enough that I’ve let it ferment out, bottled it, and will wait to see what happens in 3 to 6 months.

Lesson learned: even if I ever do use a blowoff hose again in the future, I’ll make sure to use an airlock until fermentation really picks up.

Two months after brewing, it’s still awfully sweet. The contamination isn’t an issue, but the high FG is; the alcohol didn’t really allow the yeast to do their thing so it’s still undercarbonated and it hasn’t dried out much. All I can do is sit back and wait and see if time will take care of that.

Three months after brewing, the sweetness is drying out and giving way to a more mature complexity. Still totally uncarbonated, but if the flavour keeps going the way it has been, it should still work out okay. I’ll be opening another bottle at four months.

Four months in, I brought a bottle to a homebrewers meeting. It was very well received, and I was quite enjoying it too. This one’s actually turning into a decent batch.

Six months in, I cracked the fifth last bottle. It’s still very bitter when colder, but when it’s far warmer it’s turning into quite an amazing little beer. I’m going to enjoy those last four.

I’d give this one a solid 8/10 on my scale. The lack of carbonation kills the first impression and detracts a bit from the full enjoyment, but over time it has developed into a really, really good barleywine despite that. I’ll be making this again and again.

Update: well then. Down to four bottles left, I had a choice. Either hoard ’em all for myself, or enter a couple into the local annual awards. I figured even uncarbonated they were at least good enough for a silver medal so hey, why not claim some hardware.

What I didn’t expect was that, after winning the gold medal and advancing to best of show, this beer actually won. It took the Best of Show award, which means I’m going in to Russell Brewing and making a full batch for commercial release.

I’m more than a little freaked out by this.