How better to follow up a re-brew than with another re-brew? I hadn’t intended to re-do #007 so soon, but looking at the calendar I’m realizing if I want to get some good age on a barleywine, that’ll have to be brewed in the near future. So instead of making a double-sized starter, I figured I’d first brew an amber ale with English yeast and re-pitch on top of the yeast cake.

I’ve finally decided this recipe wants to be an amber ale; while it started life as a fairly traditional ESB recipe, the addition of Munich malt has overpowered any delicate bitter notes and shifted into a completely different style category. While I was pretty happy with the previous batch, there are three important tweaks: one, I’ve added a yeast starter to the process which should curtail any fusel alcohols. Two, I’ve switched to west coast hops to up the aroma a bit, that felt a little light last time. And three, I’ve doubled down on the Munich malt and switched the yeast to a slightly different strain of English ale yeast. 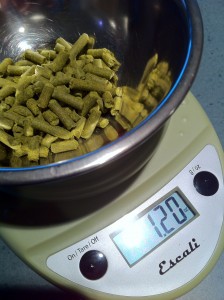 At a recent local homebrew club meeting, I got some tips on building a stir plate for my yeast starters out of a computer fan, some rare earth magnets and a magnetic stir bar. While crude, it seemed to do the job and give me a vigorous starter fermentation; I have a few ideas for improving it for the next round, but it feels like I got a good bit more yeast than last time. 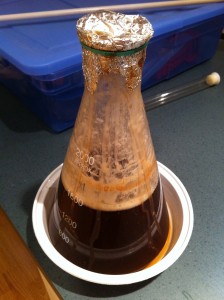 After the temperature problems during #013, I thought through the fluctuations ahead of time and made my best guess, and mashed in right on target at 156 F. By the 30 minute mark I had dropped to 152, so I added a bit of heat and finished out around 157. Pretty much exactly the range I wanted, with very small fluctuations. Given my system, I don’t think I can expect a better mash than that. 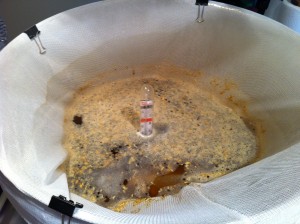 The boil was uneventful, and chilling was pretty quick. It being summer and all, I’m not convinced a few fruit flies didn’t land in the wort while chilling. I didn’t see any, but they’ve been all over the excess yeast from the starter and I saw a few get close, so it wouldn’t surprise me in the least.

With this batch and the previous, I realized I could salvage the thin layer of leftover wort my siphon can’t pick up off the trub and use it for a smaller side fermentation experiments. I’ve been harvesting it by turkey baster with a precision metal tip, then dropping it into a milk bottle with a quick yeast pour from the primary. Last time it gave me a good idea of how #013 was shaping up without having to crack the carboy, and this time I considered dry-hopping a bit differently to see how the character changes. (In the end, the yeast starter pour made for a terrible result so just I dumped it this time.) 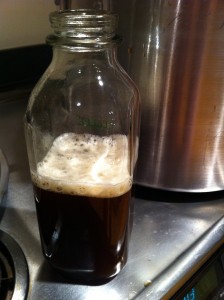 The carboy is currently chilling in my standard ice bath to keep it at an even 18 C, the yeast is pitched, so we’ll know how things are shaping up in a week or so. 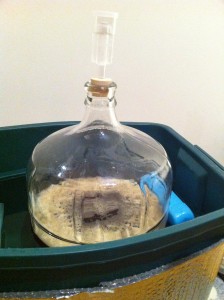 After four days of fermentation I got the feeling things were settling down and took a sample. Sure enough, it’s pretty close to done at 1.017, only a few more points to go. The malt profile is mostly there though it’s already drier than I was hoping; what I really liked about the last batch of this recipe was the rich, bready malt with some sweetness. This time it feels cleaner and drier, which isn’t a bad thing per se, but despite my process resulting in a better-produced beer I still prefer the way it finished the first time. Next time I’ll up the grain bill slightly and mash at a higher temperature to encourage a bit more body and residual sweetness.

After bottling, one thing that is clearly wrong is the hop profile. I used Goldings last time, which gave a mellow spicy and floral hop aroma, but I aimed to go a little more West Coast this time and used all Cascade. That was not the right call, the citrus notes really don’t complement the malt and the bitterness feels too harsh for the recipe. Next time I’ll be looking for some more spice and a bit of fruitiness, so I’ll be trying either Willamette or Crystal for aroma, and possibly Magnum for bittering.

I’m also not sure if the change of yeast helped; I’m getting a slightly fruitier character which is likely directly due to the London Ale III (Wyeast 1318) I’m using. I miss the slightly drier spiciness I usually get off what I used last time, London ESB (Wyeast 1968). I think next re-brew will go back to 1968.

The hop profile doesn’t feel right, but aside from that it’s getting closer to what I’d hope for out of this recipe, and still quite enjoyable. 7/10