If you don’t count the first 4 brews I did which, ignoring the very first, were consecutive attempts at the same recipe while I learned the general brewing process, this is the first re-brew I’ve done. It’s a refined version of all three of those beers which incorporates pretty much everything I’ve learned about brewing since #004, over 6 months ago. 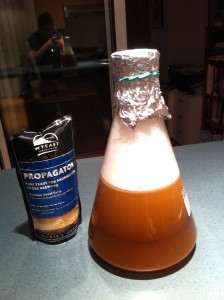 Though I was still struggling with process during #004, I figured the recipe was showing enough promise that it was one I’d eventually like to re-brew. Given that it’s been over half a year since the last time I tried brewing my favourite style, I was overdue to give ‘er another go.

I wasn’t happy with the huge ABV of #004, so I toned it down. I tend to prefer drier, less malty-sweet IPAs, so I introduced a bit of sugar to lower the FG. I wasn’t convinced the grain bill I was working on was going the right way either, so I switched up the specialty grains a bit too. The hop bill is fairly similar, though I’ve introduced Columbus for bittering and I’m bringing the Chinook forward a bit more in the dry hopping. 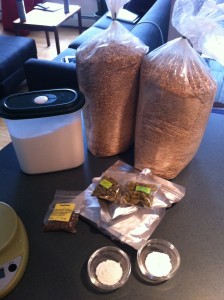 I had some temperature control problems during the mash, an issue which feels like the last major hurdle I need to clear before I can brew a consistent beer from one batch to the next. I misread the thermometer and doughed in right on target, then immediately increased the water temp by ten degrees. I spent 15 minutes bringing it back down, then I overshot and went low for another 15 minutes. I evened out at the 30 minute mark right around where I wanted it, then lost a few degrees during the next half hour. It was enough to convert, but my gravity ended up a bit lower than I’d hoped. Instead of 8% ABV I ended up just shy of 7, which is still within the range I’d consider appropriate for the amount of hops I used.

An unfortunate side effect of screwing around with the water temperature during the mash is that I ended up with a gallon or so more water during the boil than I normally do. It’s problematic because I’m already straining my stove quite a bit to get 5 gallons boiling, so 6 ends up being a mild, almost-boil that never quite makes it. I increased the boil time to 90 minutes to compensate, but that didn’t make much of a dent. I saw a few bubbles over that time, but nothing approaching the nice roiling boil that I usually shoot for.

No matter, close enough was good enough in this case, and I ended up pitching into more wort than I usually get. Fermentation was problem-free, finishing out just two points higher than I was aiming for. I skipped secondary again and dropped my dry hops right into the primary, let it sit for 7 days, then bottled. 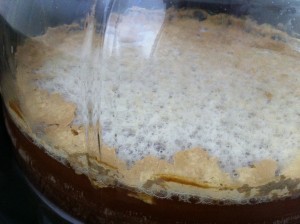 If you go back and check the log for #004 you’ll see I had a lot of problems filtering out the hop particles last time I dry-hopped. I did a bit of research up front this time and came across the brilliant idea of sanitizing a hop bag and putting it on the far end of my auto-siphon, rather than the part that goes into the fermenter. I didn’t have to deal with a stalled siphon, and I was able to avoid any major oxidation issues. I made sure to keep a hand on the end of the bag and slowly raising it as the level of the beer rose, to keep it well submerged at all times.

While I was as careful during this batch as during #012, the first few sips seem to suggest I’ve picked up some oxygen along the way. My experience with previous batches over the past year tells me that’ll be scrubbed by bottle conditioning over time, but I’m inclined to drink this one sooner rather than later. Early tests tell me it’s gonna be a good one, even with a bit of mild oxidation.

Well, the batch was completely gone in less than two months, so that says something. I still have things I want to change about this recipe, but it’s getting there. 8/10