Summer is close, to it’s time to start brewing some lighter beers for warm weather. Being partial to wheat beers, I flipped a coin and Belgian witbier won out over a German hefeweizen this time round.

The recipe again comes straight from Brewing Classic Styles; I upped the grain bill ever so slightly to accomodate my lower efficiency mash, added a bit of carapils, and introduced some ground black pepper to the boil because I have a feeling a bit of spiciness will really make this one shine.

I recently bought a large 2L erlenmeyer flask for starters to up my yeast count, since I’ve noticed the main flaw over the past 4 or 5 beers ends up being stressed yeast producing higher phenols. I boiled 2 cups dried malt extract with 2L water, cooled, and allowed the yeast to propagate for 2 days. The Wyeast web site says that 3944 is a true top cropping yeast requiring full fermenter headspace of 33%, and my starter emphasized that with a huge white bubbly head. Interestingly the beer fermentation itself hasn’t seen nearly as much, so perhaps I’m right in thinking I underpitched.

I likely should have chilled my starter in the fridge overnight before pitching, because when I decanted the starter wort off the top I realized I dumped a bunch of yeast still in suspension. Fermentation has been quite strong regardless, but I’ll have to be more careful about that next time. 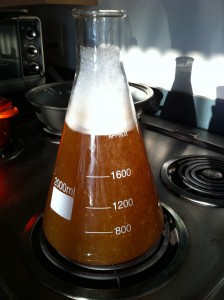 The mash was a bit tricky; the recipe calls for a stepped infusion mash, but I really can’t do a good enough job of that on my system. Instead of a 15 minute change from 122 F to 154 F like it called for, it took me just about a half hour to make that happen. I also mixed up my brew bags and used an older, smaller one, so the grain exposure to the water was smaller than normal. Despite all that, or perhaps because I compensated with extra time on the end of the mash, my OG was only two points off the target.

No surprises in the boil. All the orange and spice additives were dropped in at 5 minutes. The recipe didn’t specify how finely I should chop the orange peel; I opted to peel and then chop down into slightly smaller pieces for the sake of better extraction, which I think ultimately will lead to a more noticeable citrus character. More on that below.

Cooling was quicker than last time, and after a 30 minute whirlpool I was able to do a fairly good job of transferring my usual volume and leave behind the additives and break material. After letting the wort sit for a while longer I even had enough left over to fill up a 1L bottle for future yeast starters.

At 3 days I took a small sample to see if it was on track, and at 5 days fermentation it appeared to be pretty close to finished. A spicy citrus character dominated with a thicker mouthfeel from the oatmeal, and some grassy, astringent character is present that I was hoping would fade. At 8 days it seems I got my wish; the astringency is gone, leaving a slighty spicy witbier taste with huge citrus, courtesy of the finely-chopped orange peel. I’m not sure what citric acid is inclined to do over time; I assume that like lupulin, it’s more pronounced at the moment but it will drop out as the beer matures. But that’s only an assumption, it may just end up being an overly citric witbier. Which, honestly, I’m just fine with. It tastes great with all that orange. At 2 weeks I’m still getting that tongue-tingling citrus, though that’s probably also the black pepper talking. Another week and I’ll bottle.

I managed to continue my streak of over-active Belgian yeasts at 80% attenuation, though that’s not nearly as high as #009. The colour in the carboy is a bright golden orange-yellow, and in the hydrometer tube it’s as pale yellow as you’d expect of a witbier. 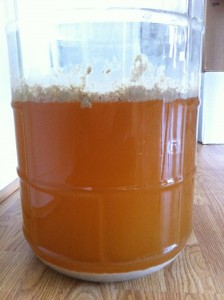 I’ve decided to start fermenting in my carboy instead of the plastic bucket I was using before, partially so I can see what’s going on but mostly because I’ve read even food-grade plastic is oxygen-permeable and I’d like to eliminate all possible sources of oxidation if I can.

I was determined not to add a lick of oxidation, and between not using a secondary, and carefully bottling to avoid foaming, I think I more or less hit the nail on the head.

Easily the most competent brew I’ve done to date. The chamomile + oatmeal combination added an unexpected creaminess, the pepper was almost completely unnoticeable, and there was a slight astringency that only a few people have been able to pick up on, but other than that it’s a damn good witbier. 8/10

I’ll probably make this again next summer without the chamomile, though I’m likely to introduce something else in its place, and I haven’t quite determined what that is yet.

Also, I had a feeling that this beer would pair well with a strong chilli pepper; I figured at some point I’d try to make a habañero witbier, but instead I decided to simply added a couple of slices of fresh-sliced habañero to a few bottles. After only a few hours of exposure I removed the peppers, and while there was definitely a big capsaicin kick, the fruity sweeter flavours from the habañero also came out. I expect I won’t do a full batch with peppers in the future, but I will certainly experiment with more a la carte bottles.