My wife is hosting a somewhat competitive brunch event in May, and I decided to help her get a leg up with a secret weapon: oatmeal coffee stout. I figure a month is just enough time to do it right, though I’ll likely have to warm the bottles I plan to serve to make sure the carbonation is there in time. 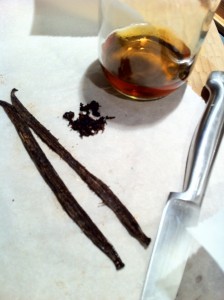 The recipe is a slightly lower-gravity version of the oatmeal stout from Brewing Classic Styles. The main tweaks were scaling everything down about 10%, replacing the Victory with Biscuit since that’s all I have access to, and adding a bit of Carapils. I’ll also be adding some cold-pressed coffee during bottling, and I’m soaking a vanilla bean in some bourbon that I plan to add to just a few of the bottles to really put them over the top. 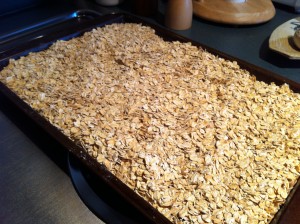 I also toasted the oats as recommended in the recipe, but likely not long enough. I noticed an unpleasant stale smell while they were in the oven, I’m not too worried about it showing up in the beer since oats don’t really impart much flavour, but I do have to wonder how old the oats are Dan’s is selling.

The mash and boil were straightforward. I noticed some big fluctuations while taking temperature readings during #010 so I tried to nail that down; seems that when I leave the pot covered I get a reading almost 10 degrees higher than when it’s uncovered, so I was able to adjust for that in this batch and narrow in on the temperature range a bit more. I still fluctuated a bit between 152 and 156 F during the mash, but my target was 154 F so it should work out reasonably well despite that, especially since I went for 90 minutes. 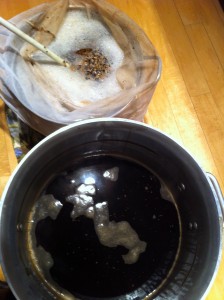 Cooling was interesting. Without a wort chiller, my method has been bringing the boiling pot of wort to the freshly-cleaned bathtub and filling it with cold water and ice. Usually this works, but for some reason this batch quickly warmed the water up to the point where it was mostly useless for cooling. I drained and re-filled until it was cool which seemed to work, but getting it down to room temperature ended up taking longer than normal as a result. Given how black this stuff is I’m not too worried about haze, so it’s no big deal.

It fermented out to around 1.013 within 8 days which is slightly lower than the recipe calls for, but I’m guessing the lower grain bill is causing it to be a bit more watery.

I scaled all ingredients proportionately, but at a week I wondered if I might have been better off decreasing the roast barley even more since it’s a bit roasty, though that seemed to back off a bit over time. There’s also a noticeable spiciness to the taste, I’m not sure what to attribute that to. It’s got stout character, but something seems a bit off still. Not worried yet, there’s still plenty of time to go, it’ll keep changing.

At just over three weeks I was ready to bottle. The sample tasted amazing, nice and roasty but balanced with a bit of vanilla-esque sweetness. The undesirable spiciness is still there, but I think that’s largely due to the yeast. 1968 doesn’t flocculate well so there are still floating chunks, and the ones in my sample glass tasted quite a lot like the spicy aroma I’m getting off the beer. Should be able to drop that out when bottling.

I skipped secondary on this one and just went straight from primary to bottling bucket after 25 days. There were still a few chunks of yeast on the top even after all that time, but I’m starting to recognize that as a trait of 1968.

I boiled a liter and a half of water and ground up 100g of Rwanda peaberry from local roaster JJ Bean. (Though it’s a seasonal I have it on good word I’ll still be able to buy it in three weeks, which is important since I want to serve the beer and a fresh batch of brewed coffee side-by-side.) That went in the fridge to cold-press for 24hrs, then I bottled. The vanilla-infused bourbon smelled absolutely incredible and after straining ended up a bit thick and syrupy, there must be some residual oils in the vanilla that dissolved into the bourbon.

Bottling went well; it was a bit of a juggling act to coordinate straining the coffee and bourbon, adding the priming sugar, then bottling, but it all worked out. The last dregs tasted a bit heavy on the coffee, but I know enough to sit back and wait and see; 100g of coffee is not a ton for a 4 gallon batch (which is how much I’m yielding on a fairly consistent basis these days) so I’m not worried yet. I even managed to keep a single bottle separate before adding the coffee as a control bottle, and I oaked another bottle just for the hell of it.

I think the coffee was the wrong variety, it contributed a slick oiliness that wasn’t overly appealing. I also suspect my starter should have been bigger, there were some fusels. And I’m also starting to realize that I’m picking up some astringency from my mash process, it’s been mostly detectable in the darker beers.

I’d give the straight bottles a 4/10. The vanilla bourbon addition really transformed those particular bottles into something great, just like the porter I made earlier in the year. Those would be more like a 6/10.

Further cementing my opinion that it was the wrong coffee, in July I finally cracked the single bottle of non-coffee stout and it was really really good, much better than the caffeinated bottles. 6/10 on their own, sans bourbon. The coffee really hurt this one.