My first crack at a Single-Malt Single-Hop beer. The local homebrew club has a two-row challenge coming up that I thought I’d brew something up for. The idea was to re-use the yeast cake from #009 and make a Belgian-style IPA.

Unfortunately through a couple of errors on my part, I ended up buying too little grain and completely killing my mash efficiency with a poorly-conceived process change, so instead of being a balanced 7% IPA, it’s more of an insanely overly-hopped 5% pale ale. The first mistake was not properly setting my volumes and process in BeerAlchemy; I designed a 1.060 OG beer and bought the grain for it, not realizing till after I started the mash that I only had enough grain to hit 1.050. And instead of dunking the bag in a secondary pot to sparge like I have in the past, I decided to try and go for a single-infusion and bring the temperature up in my brew pot to get it up to 170 F. Completely failed, and ended up with a 1.040 starting gravity.

I hopped according to the larger beer recipe anyway, which in hindsight I likely shouldn’t have done. The hop profile drowns out any esters the yeast might be giving off, and since the malt profile is so simple, we’re talking about a seriously one-dimensional beer.

Since I pitched on top of the yeast cake from a much bigger beer, I obviously over-pitched by a good margin. It ended up fermenting out completely in all of 2 days. With nothing to lose, I decided to dry hop anyway. While I doubted it’d be undrinkable, I was convinced it wouldn’t be my best effort, and certainly wouldn’t place in the competition. Notably it’s by far the lightest beer I’ve made, thanks to the complete lack of specialty grains. 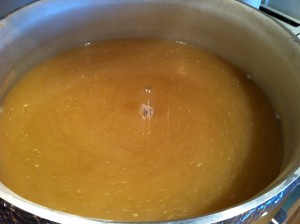 When bottling I noticed the yeast esters making themselves a bit more known, but not in a good way. After a week I cracked the first bottle and was surprised to find an interesting beer waiting for me. The hops are at stage center, but underneath there’s certainly a note of fruity esters and even a bit of sweetness I wouldn’t have expected for a beer this dry.

In the end the yeast really didn’t contribute much at all, and the malt was pretty boring. Far too little going on for such a hoppy beer. I’d give it a max 3/10, and I’m glad the batch was almost all gone by July.

I did take second place in the club contest, however. (It was out of three entrants, so take that with a grain of salt.)

Update: I opened the very last bottle almost a year later. Quite fizzy and dry, and a lighter colour than the rest of the batch. It had also developed a bit of sourness on the front end too, but that gave way to a noticeable hop kick fairly quickly. I had to sip a bunch to figure out if it was actually an interesting beer (along the lines of De Ranke XX Bitter) or not; I settled on the latter and dumped it.