My first 100% all-grain, aside from the fact it’s also the first batch I’ve used sugar in. This batch very closely follows the Black Scapular Dubbel recipe from page 237 of Brewing Classic Styles. The only substitutions were Crystal 60 instead of Caramunich, and my own homemade candi syrup for the commercially-produced stuff. And I made it as an all-grain recipe instead of extract, and reduced the boil size (and corresponding recipe numbers) from 7 gallons to 6.

I spent a good chunk of time researching Belgian candi syrup before I got started, and this post and the comments seemed to be the canonical place on the internet to turn for a how-to guide. The scientific approach and the later colour guide sold me on the process, so I ordered some DAP and other supplies and got to work. 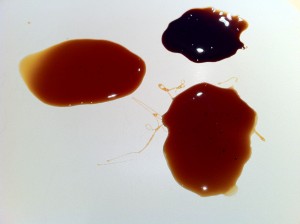 (Side note: ordering online in Canada is a bit of a crapshoot, but I ended up piling a few pounds of hops on top of an order from morebeer.com, meaning the cost difference between those and what I’d pay for the same at the LHBS basically paid for the exorbitant cross-border shipping. It worked out, but I wouldn’t recommend shopping from a US store when ordering under $100 of stuff.)

I planned to do four test batches of the sugar, but found my candy thermometer wouldn’t respond well with a reduced batch size so I ended up going by colour and only testing three types: refined table sugar (cane), raw organic cane sugar, and dextrose. The dextrose was terrible. If I hadn’t gone a shade too dark with the organic cane sugar it might have been alright, but I’m not convinced it was workable either. Plain old refined cane sugar produced the best results, so that’s what I used for my batch.

I did the 290F sugar, which turned out amazingly fruity and complex, but with a very slight amount of acrid bitterness / burnt sugar taste. There was a very quick change in the colour/smell between 285 and 290, so next time I do it I’ll likely stop at 285F. I’m enough happy with the resulting sugar and didn’t feel the need to do it over for this batch. It really is amazing what a bit of DAP and the right science can do to plain sucrose. 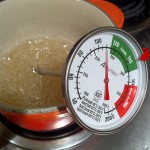 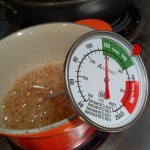 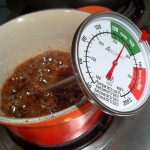 Thanks to the DME that came in my order, I’m finally able to do proper starters. I bought a yeast pack on Wednesday, let it warm overnight and smacked it on Thursday morning, quickly boiled a half liter water and a half cup DME, cooled and pitched. It fermented for a few days at 18C, my pitching temperature. I poured off a bunch of the starter beer before pitching, though I probably could have dumped it all in and been fine given how much other flavour is going into this beer. 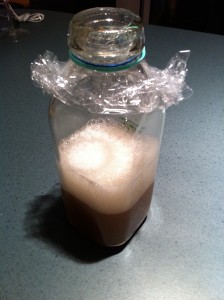 The mash went well enough; I’m still trying to figure out my temperature differential between strike temp and mash temp, so I thought I’d strike a bit lower this time to adjust for the problem I had with 007. Instead I ended up mashing in at 140F instead of the 149F this recipe calls for. In less than ten minutes I got it back up to the 149/150F range, and that’s where it sat for 90 minutes. The recipe recommended I go for longer to compensate for the lower temp, so that’s what I did. The numbers seem to work out in the end, I ended just a touch low on OG, but not enough to worry about. And I’m definitely finding it’s easier to add heat than remove it if I’m off on the numbers, so I’ll continue striking a bit lower until I figure this out. 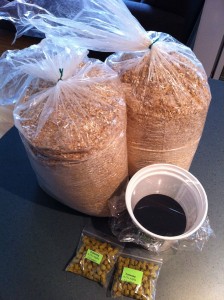 First time doing a 90 minute boil as well. Added the hops at 60, they’re pure bittering hops so it was just the single addition. I’m finding keeping the pot mostly-covered and draining the condensate every few minutes is the best compromise between a rolling boil on my stove and too much DMS trapped inside the brewpot. Laborious, but the only way I’ll ever get 6 gallons boiling on my stove. Cooling and whirlpooling went smoothly, and this time I saved the trub I left behind, let it settle, and decanted off the remaining beer to stick in the freezer for a future starter. May as well save that DME if I can, since I only bought a pound. 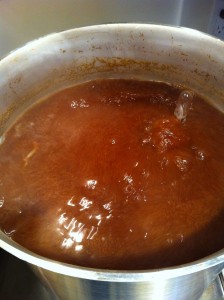 I forgot to aerate before pitching, but it fermented out anyway. Crazy well too, I dropped from 1.060 to 1.005, my driest finish yet. I had a much harder time than usual guessing where the flavour profile was going during fermentation, and I think that’s because I ended up with a different beer than I was expecting. The dubbel recipe I used was supposedly to take a dark red fruit flavour from the candi syrup, but the ester profile is far more yellow fruit: apricot and banana. I suspect the iso-amylacetate causing the latter will mellow over time though. The slightly-dry finish is bright and peppery, so there’s a ton of interesting stuff going on, but the flavour profile reminds me more of a saison than a dubbel. All signs are pointing toward a fantastic beer, but it’s surprising how far off from what I was expecting that this seems to be going. 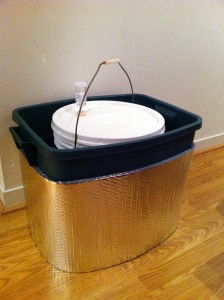 I didn’t bother with a secondary. After two weeks in the primary I went straight to bottling. There were large clumps of yeast floating in solution, and the yeast cake was more pilled and chunky than a flat cake which is a similar characteristic to Wyeast’s London Ale (1968). Or maybe that’s just the way liquid works, vs. the flat-bottomed dry yeast I’d been using up till recently.

Bottling went well. I primed with cane sugar (may as well keep going with the same sugar I used for the rest of it) at 3.2 vols, but didn’t use quite enough water and had a syrupy priming solution. I gently stirred with my auto-siphon to try and dissolve it in, but it’s possible I’ll have unevenly carbonated bottles. Hopefully not, the higher priming rate could lead to some serious bottle bombs if the mix is uneven.

Cracked the first bottle at 3 days since my higher priming rate will cause issues for the two thinner New Belgium bottles I had on hand. Already there was a noticable pfssst as I opened and a bit of head that dissipated quickly; tons and tons of chunky floating yeast, but this was the last dregs as I was transferring so I’m not too worried. A nice complicated nose, but the flavour is fairly banana-forward. Apparently you get more isoamyl acetate if you don’t aerate, which I didn’t, so I suppose that explains it. Hopefully it’ll diminish with a bit of time. Absolutely no oxidation, so I can afford to give this one plenty of time.

After a few weeks, the taste was a lot drier than I’d expect from a dubbel. I think my yeast went a little overboard. I also started picking up a slightly warmer alcohol taste, so I think my starters are still too small.

6/10 on my personal scale. The first batch where I had no process errors, and the recipe is a winner. I wish it hadn’t gone quite so dry, but it’s the only thing I’d change. I’d probably keep it away from actual Belgians, but short of that, I like it quite a bit.

Update: I entered this one in a local homebrew competition, and unlike #007 the judges hated this one. The dryness really turned them off of it, and I suspect they likely had a warmer bottle which really kills any leftover sweetness, so I only managed a 23/50.

Update 2: after a few more months, the dryness stopped being much of an issue and some more complex flavours came out. Unfortunately I started noticing some hotter alcohol, likely a result of my starter being too small. I’ll definitely be re-brewing this with a different yeast next time, but I also suspect letting it sit for at least 3 or 4 months before entering into a competition would be wise.

Update 3: finished my last bottle just shy of a year after brewing. Noticed the hot alcohol and a bit of DMS, I guess that’s the vegetal character talking. Otherwise, aside from being too dry, this one finished up as a decent dubbel. Next time I make it I’ll mash at a higher temperature to keep some sweetness, and maybe go for a longer boil to get rid of more DMS. And do a larger starter.