I needed apple juice anyway to top up 005, so I brewed a second batch of cider.

This time I completely skipped the boil; the juice I’m buying is UV-pasteurized so there’s no point. I doubt I’ll bother doing it in the future, even if I get my hands fresh unpasteurized juice; I’d imagine the wild yeast would have a tough time overwhelming the added yeast. Even if they did, that might be a better result.

So the initial brew day was dead simple. Proof yeast, add nutrients, drop in the jug, and let ‘er go. Only, the leftover champagne yeast I had apparently wasn’t up to the task, so I had to dip into my emergency backup store of dry ale yeast. Not ideal, everything I’ve read says cider made with ale yeast doesn’t taste as good, but Dan’s was closed and wouldn’t re-open for a few days, so I just went with it.

Fermentation was a bit warmer since this is ale yeast after all. I racked it at a week after it had dropped to 1.000, even though there was still activity. My theory was stopping a bit less dry might make for a better taste this time; doubt it made a difference in the end, there was still enough yeast in suspension that activity continued for another day or two, but it did seem to finish out at 0.999.

I racked again time to get it off the remaining yeast, then dropped in sauvignon blanc-soaked oak chips for a little over two weeks. The wine I’m using is from a batch of U-Brew my wife did, hence the name. 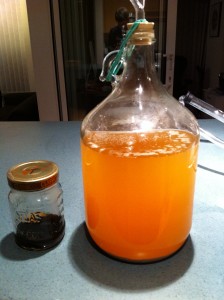 When I bottled it was a bit drier than I had hoped, but it is tasting a lot more palatable than the last batch. The nose is yeasty and it feels a bit estery still, but with time it’ll likely turn into something more interesting. And since I didn’t have to add sorbate this time I was able to carbonate; guides on how bubbly cider should be range from still to a whopping 4 volumes. Something tells me I want this batch to be a bit brighter, so I opted for 3.

Finally cracked a bottle in late June, and it didn’t seem too bad. The ale yeast gave it a bit of a cork-like aftertaste, so that’s a good reason not to use it again. I’m not sure the wine or oak are really contributing much, so I’m likely to drop them next time and just do a batch of straight cider. 3/10