Even though my first partial mash results were less than perfect, I realized with my new pot I had what I needed to do brew in a bag style all-grain brewing, at least with a lower ABV beer. 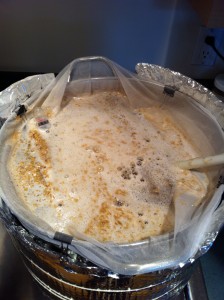 My initial take was to do a straight up British-style ESB, but I liked the Munich malt I used in my porter and decided to go darker with some of that and a bit of chocolate for extra roastiness while I was at it, so I’m calling it a red ESB (basically half ESB and half red ale). I also stepped up the hop bill, going with more aroma than normal for an ESB. 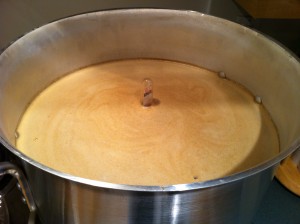 The mash went a bit better than the partial I tried last time, but I still had some temperature problems. It started too high, and I guess I was a bit spooked by the too-cool mash from last time because I adjusted very gradually over the course of the hour. I’d say my overall mash temp was about 157 F, when my target was 151. Still, a bit more body in this beer shouldn’t be a huge problem. 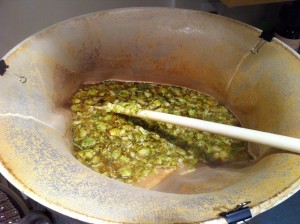 I also tried something a little different with the boil. Instead of dumping the hops in, I wrapped a mesh bag around the pot and kept them separable, then at the end of the boil got rid of them in one go. This allowed me to try a proper whirlpool where I stirred the wort for a bit then gave it 20 minutes to settle. All the break material and extra grain chaff (there was a lot of the latter) settled to the bottom and I was able to leave it behind in the pot by siphoning out the cooled wort. I did have to leave behind a bit more than normal in order not to take a bunch of the trub, so there’s likely a better way to do it. Still, I’m hoping the lack of trub means this one is going to suffer a lot less chill haze than previous batches. I don’t really care about the haze that much, but it’d be good to know what causes it. 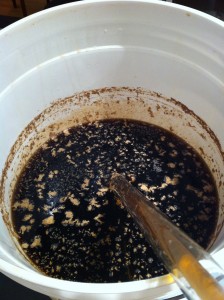 I had a bit of extract left over from the last batch so this one isn’t technically all grain, but at a pound and a half of extract it’s close enough. Maybe it’s the new yeast, but after four days of fermentation it was still bubbling away. I’d have expected it to slow down by then, but it was the fifth day before I saw noticeable fermentation slowdown.

I racked at one week, and noticed a lot more yeast floating on the surface than normal. I haven’t used Wyeast 1968 before so it’s possible this is just par for the course. I also noticed the yeast cake below was a lot chunkier than normal; last time I saw a yeast cake like this was with 003, the batch I really screwed up. This one smelled far better though, and the beer turned out great, so I guess chunky yeast is nothing to worry about. I’ve heard British ale yeasts tend to do that. 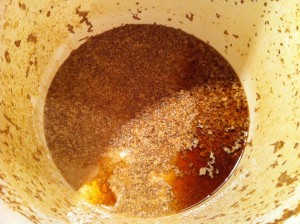 When I racked I primed and filled a single bottle because I’m a bit impatient to see how this one turned out. I’m not sure that was a good idea, stopping and starting the siphon introduced a bit of oxygen. I think I’d better just have more patience in the future. Two weeks later, that bottle tasted damn good. Better than it had any right to be. I’m excited about the rest of the batch.

Unfortunately when I went to bottle, I did about half the batch before realizing I hadn’t primed the batch. Carefully pouring each bottle back into the bucket I primed and re-filled. Lots of potential for oxidation there, but after hesitantly cracking a bottle a week and change after priming, it tasted alright. Seems like I dodged a bullet.

At two months in I’m almost out of bottles already. It went really quick. That’s a good sign.

A solid 6. The first beer I’ve made that I’ve quite enjoyed drinking, and will consider brewing again. A bit of hot alcohol from the lack of a yeast starter, but that was the only noticeable flaw.

Update: I entered the last few bottles of this one in a local homebrew competition, and while it didn’t place I managed to score 34.5/50. The comments were bang on and highlighted flaws I knew of and some I only discovered after submitting. Couldn’t ask for a better result really.

Update: I saved a bottle for a few seasons and served it during a homebrew retrospective BBQ in the summer of 2011. It had dried out a bit, but was still amongst one of the better bottles over the past year.