It was time to switch it up. Aside from the previous process issues I’m happy with where my IPA recipe is going and will do a re-brew soon enough, but I wanted to try some different styles in the meantime.

Porter was an obvious next step, something dark and flavourful. I basically went with a straight interpretation of the robust porter recipe out of Brewing Classic Styles. The only modifications I made were switching to Cascade hops instead of Goldings, and I converted the recipe to a partial mash. 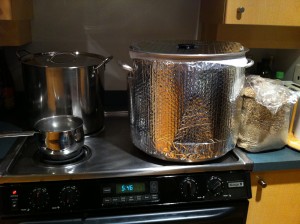 Just prior to this brew I bought a large aluminum pot and some reflective insulation to try and up my boil temperatures, but I realized with two pots I had enough space and heat retaining ability that I could try a partial mash. I swapped out some LME for some two-row and mashed the rest.

It didn’t go that well. I’ve read you lose a good 10 F or so when adding the grain, but my starting temp was too hot anyway, in the 160+ range. I added a bunch of cold water, and within 10 minutes got it down to the low 140’s. Oops. I was shooting for 152, and never quite made it back up there, so I ended up with a lot more simple sugars. So it’s fermented out a bit bigger than I’d intended, with a bit of hot alcohol flavour. But otherwise the base grains are solid so the flavour is there.

I also kept my grains separate with a mesh bag, but I discovered a bit too late that it didn’t reach the sides of the larger pot. I ended up tying off the top and dropping the whole thing into the water, but there was still a bunch of room on either side. Not ideal. 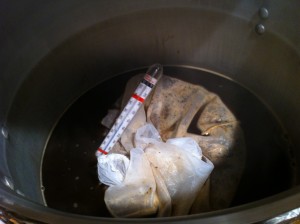 Cooling with the new pot is trickier; with the smaller one I’ve just been dunking it in the sink and recirculating the surrounding water with some ice packs. That gets me down to room temperature within a half hour. The new pot doesn’t quite fit though, so I have to use the tub as a backup. Works, doesn’t chill quite as quickly, but it’s close enough. 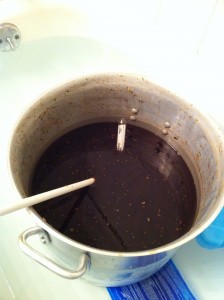 After three weeks, the carbonation was building up quite slowly. I did prime for 1.8vols to match a traditional English Porter level of carbonation, so a bit lower than previous batches. I gave it more like five weeks to properly carbonate, but this batch doesn’t form any noticeable head when poured.

It also turned out on the hot side. The straight bottles have a lot of fusel alcohol, though it’s still mostly drinkable. I added a few ounces of cold-pressed Stumptown to a few bottles and some oak-aged bourbon to another couple. I’ve only cracked one of the coffee-infused bottles, and it is fabulous. The cold-pressing brought out solid coffee flavour without much extra bitterness, and the coffee really masks the hot alcohol in this batch and rounds out the flavour. The bourbon editions were not quite as amazing, but I’m going to have to exercise serious restraint to not open the one single bottle I added both coffee and bourbon to.

The name? Well, this was just finishing up around the time I was jumping on a train to head to Portland. I was thinking of bottling one or two early and bringing them down for my friend, but decided not to rush it. On the train I had my first Black Butte Porter in ages and realized the taste profile is very similar, so the universe was aligning to tell me some homage to Beervana seemed in order. (Yeah, I know Deschutes is in Bend. Deal with it.)

The Stumptown coffee-infused bottles are an easy 6. The coffee made a huge difference. The oaked bourbon-infused bottles mask a bit of the hot alcohol, but not enough. They’re only a 3.

Interestingly, a 1L bottle I had sitting in the fridge for a few days after cracking greatly improved with the extra time/oxygen. The fusels are all but gone, giving way to more of a protein/umami/soy flavour. I wonder if oxidation actually improved this bottle.

Update: I saved the coffee/bourbon bottle for a few seasons and served it during a homebrew retrospective BBQ in the summer of 2011. It dried out further, and even the coffee and bourbon couldn’t save it.