My wife is a fan of the various barrel-aged ciders we’ve sampled from BC, WA, and New Zealand, so I thought I’d take a crack at brewing an oak-aged bourbon cider to keep her on the supporting side of this new space- and time-consuming hobby.

I did a bit of Googling to find out how different the general process of making cider was from beer: not much. The boil is more of a simmer (if you’re going to do it at all) since your goal is pasteurizing rather than isomerizing or producing melanoidins. The additives are few, and the yeast is a slightly different variety, and you want to age a lot longer, but other than that it’s pretty much identical. 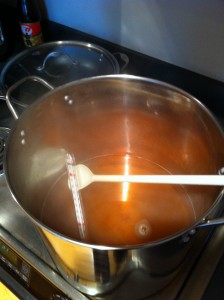 The best how-to guide I found was this one on instructables.com. My major tweaks were in recipe, although I did spend more time than recommended ensuring my sanitation and oxidation-avoidance practices were up to par with my beer brewing. And contrary to that guide Wikipedia says cider is best fermented between 4 C and 16 C, so I’ve also been careful to keep the fermentor temperature a bit lower than ambient.

But anyway, the first few steps were easy. Sanitize as normal then simmer the apple cider for 45 minutes. The OG (1.072) came out quite a bit higher than the apple juice (1.053). The sugar I added only tacked on a few points, the main culprit was evaporation during the simmer. I suspect I’ll rely on the UV pasteurization of the juice I’m buying next time and skip the boil, which should temper the ABV down to a more manageable 7 or 8%.

I did my usual ice batch cooldown, even though I rather doubt there are any proteins or other haze compounds that need to drop out. Once it was at pitching temperature I transferred to the 1 gallon glass jug the juice originally came in (score, free mini-carboy!), proofed and pitched the yeast with a dash of yeast nutrient, then dropped in an airlock. 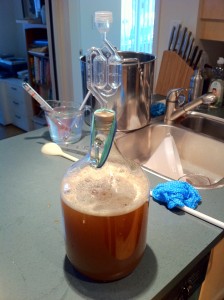 I set it aside to ferment and kept the temperature low the first day, slowly raising up to an ideal of 16 C. Though realistically, since my temperature control involves very imprecise ice packs and a water bath, the temperature ended up fluctuating between 16 and 19.

After 4 days of fermentation the gravity dropped from 1.072 to 1.018, and it was already smelling/tasting like cider. The colour also lightened up considerably, although it’s still darn near completely opaque. 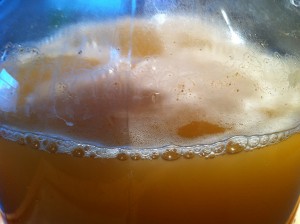 At one week it finished out at 0.998. The taste was considerably more sour than at 4 days, without much sweetness to balance it. Since I’m sure my sanitation was fine, I suspect the culprit is either the condensed juice I started with post-simmer, or just an overly-complete fermentation.

At 8 days I racked it, which was not an easy job. The lower volumes and larger equipment caused a few misfires and a lot of suck-starting of the hose. My auto-siphon wouldn’t fit in the 1 gallon jug (by a slim margin, but enough that I wasn’t going to force it.) The racking cane was too tall to get a good flow over. Eventually I had to pull a spare, not-clean hose out of the closet, quickly sanitize, and suck-start to get the flow going. Even then, the hose wouldn’t stay put underneath the watermark while I tried to start it, and I kept sucking air. I finally found a way to hold it in place, get it going, and finish the transfer.

I’m hoping total disaster was averted and I didn’t introduce too much harmful bacteria simply by the fact it’s already fermented, 10% ABV, and there’s bourbon in it. We’ll see. It could also suffer from the overt aeration that resulted, but that’s the lesser of two evils at this point.

On the bright side, after having swallowed at least a quarter of a pint while racking I’m enjoying how it’s tasting far more than the tiny sip I had the other day. Much less sour than I was afraid of. The added bourbon has darkened it quite noticeably, and the oak chips sunk immediately to the bottom. I guess that’s what a week of soaking will get you since they floated last time I used them.

After a bit over a week and a half on the oak, I was happy with the flavour so I racked off. I added a teaspoon of potassium sorbate to inhibit the yeast, to allow me to mix in some extra apple juice when bottling and sweeten it up a bit. Won’t be able to carbonate now, but I think sweetness will trump bubble in this batch.

On bottling I did a few taste tests and figured somewhere between a 1:8 and 1:10 juice to cider ratio was the right target. Then I messed up my numbers and ended up adding enough juice to hit a 1:5 ratio. Sweeter than I wanted, but not terrible. Bottling was not a big ordeal given that I’ve figured out how to compensate for the lower volumes. Now to let it sit for a bunch of months.

Initial thoughts on what sort of alcohol boost the bourbon will add — 2oz at 40% ABV = 24mL pure alcohol. Final post-ferment ABV ended up at 10%, and thanks to the racking loss I’m expecting final yield to be about 3.2L. That’s 320mL of pure alcohol. Add the extra 24mL, re-run the math and we end up with a final ABV of 10.75%, so the bourbon will add something like an extra 3/4 of a percent. Nothing too drastic.

We opened a bottle in late May, and the strong acidity had faded. As I feared the extra apple juice caused it to be overly sweet. Good to know, the harsh flavours mellow out over time. I likely shouldn’t have tried to correct it. 5/10

Update: I had the last bottle of this batch just shy of one year later. Some rubbery phenols, the bourbon and oak character had diminished, it wasn’t a very tasty result. Someone described it as tasting like the cheap fruit wines made by a previous-generation family member; sadly, that wasn’t too far off.