After the mishap with #003, #004 was intended to be a back-on-track recipe refinement of the IPA I’ve been working out since #002. 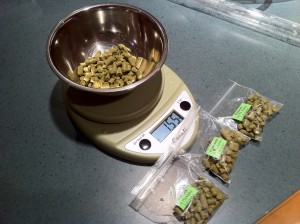 One December afternoon just prior to the new year I invited some friends over for a collaborative brew day. (Collaborative in the sense that I did all the work then told them what I was doing.) The process was fairly standard, though I lost my digital thermometer halfway through when it lost calibration.

I did two things differently than previous batches; I added some minerals to treat Vancouver’s overly soft water, and I watched my volumes like a hawk to try and finally weed out the last of the bad advice I’d received from the local homebrew shop.

Adjusting was easy; I went to the city web site and grabbed the water quality report (PDF) to find my starting numbers, and played with the numbers in BeerAlchemy to up the calcium, sulfate and chloride. Since I was using a combination of gypsum, chalk and table salt I also increased the sodium and alkalinity in the process. Final numbers look something like 90ppm Ca, 63.6ppm HCO3-, 80ppm Na, 120ppm Cl-, and 120ppm SO4.

I’m not sure if I trust BeerAlchemy’s numbers yet however. I designed the recipe below to target the IIPA style as close as possible, but it was only giving me a predicted OG of 1.065. That’s as far as I wanted to up my malt bill, and the reality ended up being way off at 1.099, so I have an accidentally-huge 11.5% beer on my hands now. Not the worst problem in the world, but the fact I carefully watched my post-boil dilution and shot for a dead-on 5 gallon batch (previous batch yields have been 6 gallons) meant that I didn’t see it coming.

When I saw those numbers I realized I had to pitch more yeast; I’d bought a proper Activator pack this time, but it still wasn’t going to be enough on its own. I proofed one of the backup packs of Coopers I now keep in my fridge and added it too. I’m far more worried about hitting the right yeast volume than I am about having two different strains in there for now.

Fermentation was straightforward, dropping the gravity fairly quickly. I started low, then brought it up to room temperature on the last day to clean up any remaining sugars. I racked at 9 days, and dry-hopped with half of the total dry hop bill. I roused them every few days with a bit of careful swirling, but the top layer started tasting a bit oxidized so I dumped in the rest and quit with the swirling until I bottled. I was also picking up a faint hint of acetaldehyde when I racked, but that went away. 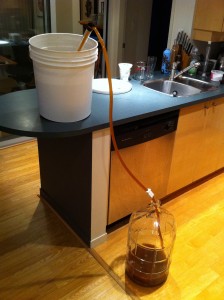 Bottling was a complete disaster. In order to strain out the dry hops while I transferred to the bottling bucket I wrapped the end of my auto-siphon with cheesecloth. Huge mistake. Flow through the hose was so restricted that it kept stopping. As I tried to start it back up again I struggled to keep the end of the hose under the water line, so a ton of air bubbles crept back up the hose and did their best to oxidize every last drop. Halfway through the transfer I decided to kill the auto-siphon and just suck-start the damn thing, but the cheesecloth meant the siphon got caught in the carboy opening and I spent at least a half hour trying to get it out. Keep in mind this was all happening with a half-full bottling bucket, and an increasingly agitated secondary yeast cake plus dry hop material in the carboy. Lesson learned: put the cheesecloth on the outflow end of the hose, not the intake. 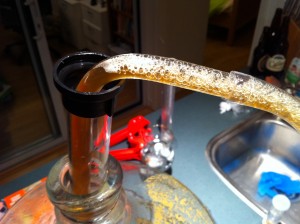 Long story short, yes, the beer is oxidized. The secondary ferment in the bottle cleaned up some the worst of it, but every one I’ve had so far has that distinct oxidation tang. A few bottles suffer from residual diacetyl as well, though that went away with a bit of time. Not nearly as good as it could have been, but the recipe is promising; the hops leave your palate positively tingling, which is awesome. Next time I do this one I may go Columbus instead of Chinook, and I’m definitely upping the bittering hops. The alcohol will get knocked back a bit, but I think it still wants to be a big beer: 8 – 9% feels like the right range.

Also, I have to assume it’s the work of the extra oxygen, but this one came out way over-carbonated. Not gushing, but given the sugar I measured out it should be at least a full volume less carbonated than it is.

Sadly, 4/10. The good stuff is in there, but the oxidation and the way over-carbonation that happened as a result pushes this out of the range of good, into just tolerable.

I did have one bottle that was miraculously clear of all oxidation, and it was closer to a 7, possibly even an 8. So the recipe has serious promise, I’ve just gotta get the process worked out.

Update: I saved a bottle for a few seasons and served it during a homebrew retrospective BBQ in the summer of 2011. After a big sweet hit on the front end, the diminished hops were still there. No oxidation to be noted, I think bottle conditioning eventually takes care of that after longer periods of time.