Fates conspired against #003, officially dubbed CBI Ale: an ale because it’s essentially style-less despite starting life as a clone of #002, and CBI which unceremoniously stands for Clusterfuck of Best Intentions.

Brew day couldn’t have gone better. I adjusted my hop additions to decrease the bitterness and increase the late additions; I was really trying for more aroma in this recipe. 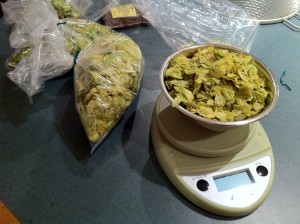 It was moot though, thanks to bad advice from Dan’s. I decided to give liquid yeast a try, and ended up walking out of the store with a Wyeast 1056 Propagator smack pack and an assurance that I could just dump it in. The back of a Propagator pack spells out in no unclear terms that it’s meant to propagate in a yeast starter first before pitching, but despite a nagging feeling I dumped it in anyway, then began regretting it almost immediately.

After 24hrs of fermentation, nothing much was happening. This was counter to my past two batches, I was expecting to see some activity. I knew the yeast was working anyway, but the lack of activity led me to run my numbers through Jamil’s yeast calculator and compare them against the count on the pack. 189B cells needed, 25B pitched. Aw crap.

I thought about it for a while. Two options presented themselves. One, I could do nothing and let it ferment, despite being way low the yeast will probably get the job done. Two, I could pitch more. I decided two was the way to go, and in an effort to settle down the yeast I had pitched already I dumped as many ice packs I could in the bucket of water I had the fermentor in and got the temperature down to about 12 C overnight. 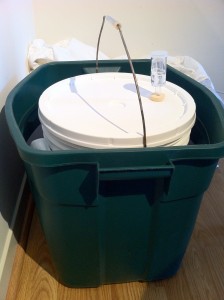 The next day I stopped by Dan’s for more yeast, and naturally, they were closed that day. Some choice words and a sunken heart later, it was obvious that the damage was done at this point and more yeast wasn’t in the cards, so I had to go with what I had.

I brought the temperature back up to room temperature and let it ferment warm to give those poor yeast as best a chance as I could. At 7 days the yeast had pretty much done their job, and much to my surprise it fermented out. The sample was tasting quite fruity from the esters so I decided to forgo dry-hopping and just let it sit in the primary for another week instead of racking.

Come bottling day I took another gravity sample for final numbers, and noticed the thief coated in yeast chunks. Not only that but the sample tasted terrible; far less sweet than a week prior, and almost meaty in a hot dog weiner sort of way. Not good.

I decided not to bottle just yet and racked it off the yeast, which floated in bizarre clumps and smelled absolutely foul. From everything I can tell the off-flavours were from yeast autolysis, or dead yeast. I likely should have racked this one after the first week was up, but the damage was done.

A week after racking, I ran up against a hard time limit and was forced to bottle. The clumpy yeast had cleared quite a bit, but the bottles certainly weren’t clear at this point.

Despite every suspicion that I’d have to dump this batch, or relegate it to cooking beer, or do anything but actually drink it, it would seem that those hardy little yeast have come through for me in the end. For a while it had taken on a sweet caramel flavour, much like a local winter ale from Granville Island Brewing which I describe as tasting like caramel corn. I experimented with a few oak chips in three of the bottles, and the one I had reminded me of nothing more than an Innis & Guinn.

On the other hand, a month after being bottled the flavour profile has changed again. Drier, simpler, almost a lagery saison. Seems likely this one will keep changing over time, so I’m going to go through it slower and keep updating as I learn more about it.

At four months it has become medicinal and chalky with too much sweetness, so the last few bottles may be headed for the drain. I’ll give them more time, who knows what will happen.

At one point, 4/10 on my personal scale, but probably will finish up closer to a 2/10. During the first few weeks this one was quite drinkable. But it got far worse as time went on. Chalky citrus, not a good beer.

Update: I saved a bottle for a few seasons and served it during a homebrew retrospective BBQ in the summer of 2011. It pretty much stopped changing; it tasted about as crap as it did after four months.