Brew number two was an exercise in recipe creation and applying process corrections after what I learned brewing the first batch.

Bittering hops were essentially just leftovers from the first batch. The aroma and dry hops were my choice; I’ve decided to focus on Cascade and Centennial for the time being as they tend to be present in my favourite IPAs.

The boil was much stronger this time, more obvious hot break material. I’m still unable to do full boils so I went with 13L again and diluted which isn’t my preference, but a reality of my kitchen. Instead of dumping the dry yeast directly into the batch, I properly warmed and proofed it. Not sure what ultimate difference this makes in the final product, if any, but at least I was confident the yeast was viable.

The biggest difference in this batch was my fermentation temperature control. Rather than letting the batch sit in a warm room, I dropped the fermentor into a plastic tub of water. By monitoring the temperature closely during the primary fermentation and swapping out ice packs as it got too warm, I managed to keep the mercury about 5 degrees below ambient. Any fluctuations were gradual thanks to the increased thermal mass of the water surrounding the fermentor, and the result was noticeably less estery than the first batch, even right after primary was finished.

I dumped the whole hop cones directly into the secondary for dry-hopping, which basically just saw them float on the surface and not achieve ideal saturation. Despite buying a bag and some marbles to weigh it down, in the future I’m just going to use pellets for dry-hopping. 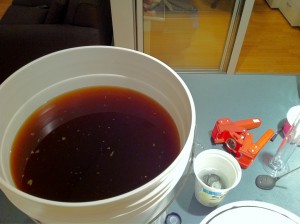 After bottling I couldn’t wait and started drinking this batch within a few days. Initially it was a touch sweet from the bottling sugar, but as the carbonation built up that gave way to a nice crisp finish. I wanted more hop aroma however, this one carried more bitterness than flavour from the hop additions. It wasn’t the best IPA ever, far from it. In fact I have my doubts it was truly an IPA by today’s west coast standards. Despite that, it was a solid beer for my second effort, one I didn’t feel embarrassed about offering to brewer friends.

Update: I saved a bottle for almost an entire year and served it during a homebrew retrospective BBQ in the summer of 2011. It aged quite poorly. Thin, insipid, the back half of the bottle got dumped.